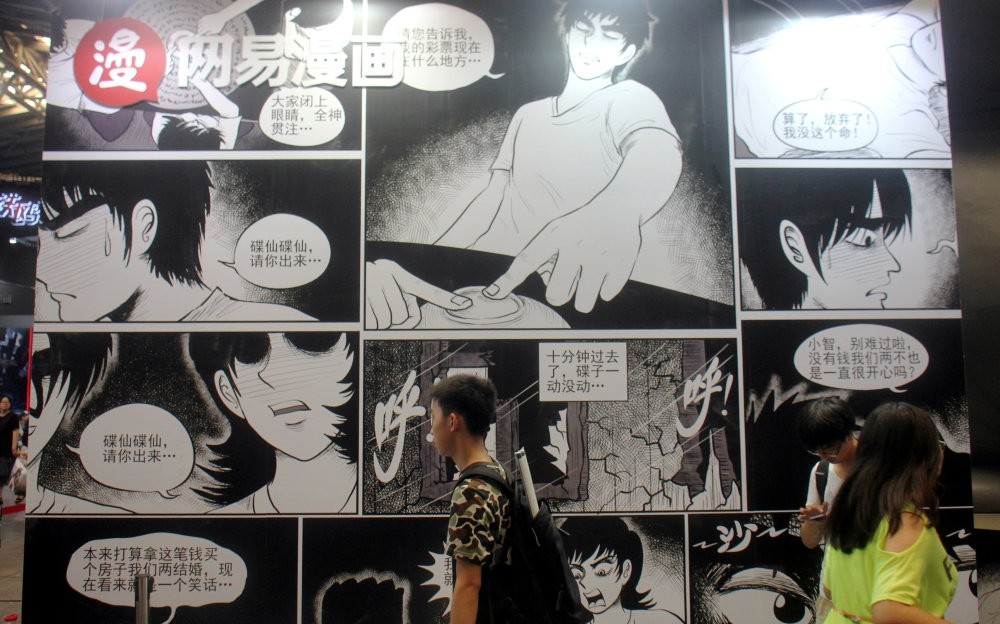 People walk past a booth of NetEase Comics at the China International Cartoon and Game Expo in Shanghai.
by Jun 25, 2018 12:00 am

Growing up in the Chinese port city of Dalian in the 1990s, Zhang Hongchang spent hours immersed in Japanese cartoons like Dragon Ball and Naruto. China's home-grown cartoons paled in comparison to the Japanese anime series on television and in comic books that captured the imaginations of Zhang and his generation.

Today, Zhang is one of China's hottest cartoonists and at the forefront of a new wave of Chinese animation that is being driven by the country's technology and internet giants. His latest hit comic - which stars a high school student who is also a Taoist priest with secret super powers - has been viewed 160 million times online. China's tech firms are engaged in a cartoon arms race to develop or buy Chinese characters in an animation market expected to hit 216 billion yuan ($33.22 billion) by 2020, according to the EntGroup consultancy, trying to emulate the success of Walt Disney Co's ensemble, which ranges from Mickey Mouse to Iron Man. A key to that effort, has been the development of artists like Zhang.

"When I started, I was copying Japanese cartoons, but slowly I got my own style," Zhang said in the Hangzhou studio where he draws comics that are made available to readers on a platform operated by the local gaming firm NetEase Inc. "I had to spend a lot time getting to understand the Chinese market and what Chinese comic readers wanted."

Chinese tech giants like Tencent Holdings, Baidu Inc and NetEase are trying to figure out the same thing. Part of the winning formula has been the use of traditional Chinese religious and cultural themes, and characters. That, and improved quality in terms of art and storytelling, helped China's comic and animation market reach 150 billion yuan last year, according to EntGroup's estimates. China still lags behind the Japanese and American markets, but is catching up. Japan is the top producer of animation, while the United States dominates in terms of sales, taking a nearly 40 percent share of the global industry, estimated at $220 billion in 2016, according to a report from Research & Markets. China had around 8 percent that year. For Chinese companies, the development of compelling series and characters could also open up new business opportunities that companies like Disney have exploited, like branded theme parks, games, movies, TV shows, lunch boxes and clothes.

"To make it work there have to be good stories, good production, and content that can resonate with consumers," said Xu Zhiwei, animation and comic copyright senior manager at Tencent in Beijing. Tencent is already seeing some success that could help the firm maintain rapid growth and a high valuation. The gaming-to-social media company bought up "Fox Spirit Matchmaker", which depicts romances between humans and demons, when it was a little-known comic, created by an artist called Xiao Xin. The comic has been developed into an animation series that's been viewed more than 3 billion times, Tencent told Reuters, making it one of the hottest hits on its video platform, which has over 60 million paying subscribers. Tushan Susu, the animation's main character, has been featured in a commercial for the fast food chain KFC . Tencent is now looking to create a television series and a video game using Fox Spirit characters.

China's tech giants play an outsized role in Chinese entertainment. Tencent, the search company Baidu, and Alibaba, the e-commerce giant, control most of the top online platforms from movies to sport, and are dominant in social media and online gaming. These firms are looking to latch on to a surging sub-culture being driven by a young generation with a taste for animation, called "dongman" in Chinese. This group is keen for more local-style heroes, according to industry executives. They are also wealthier than their parents were, and have money to spend.