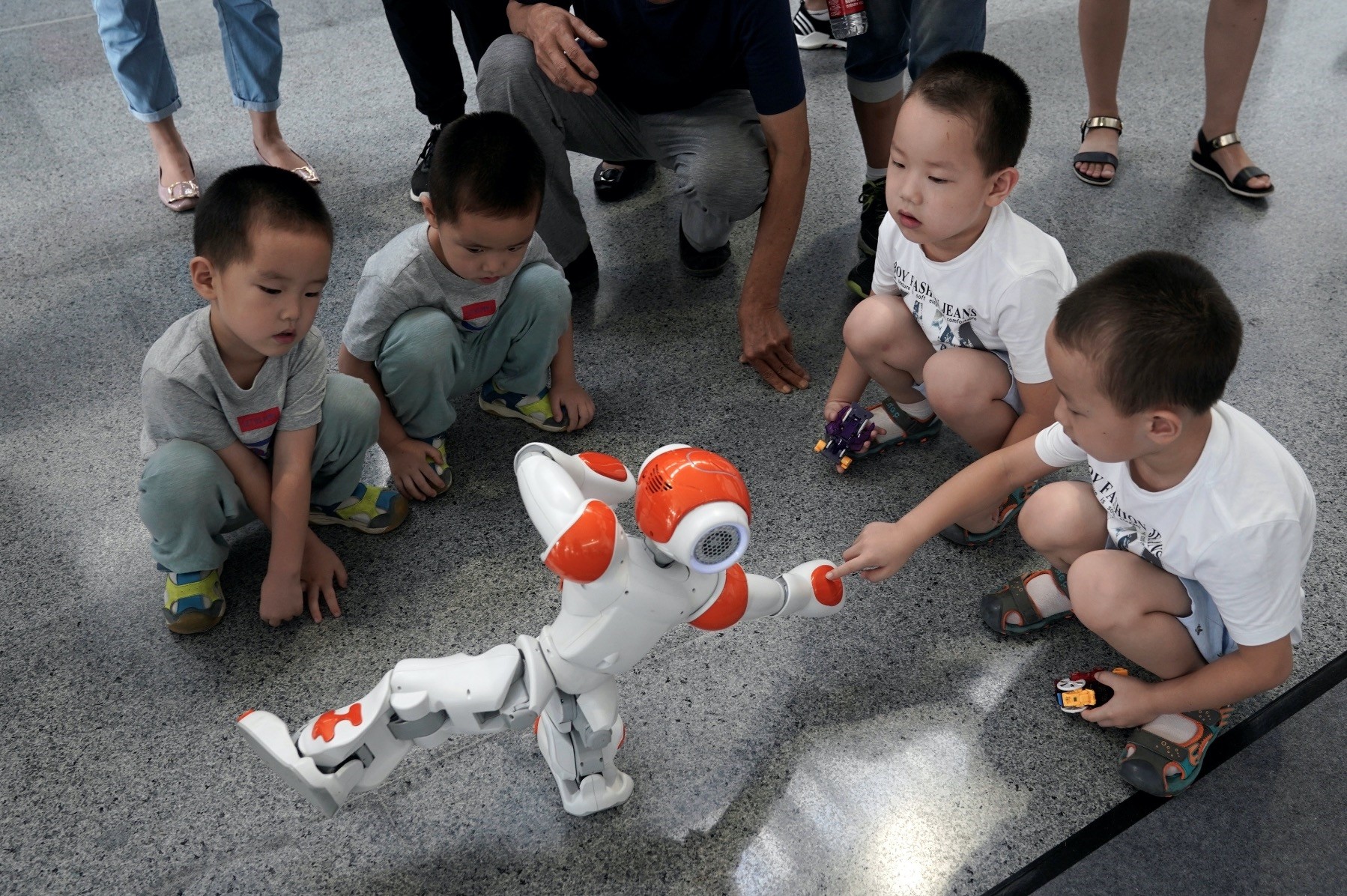 A boy touches a robot as it performs Taiji, a traditional form of Chinese martial arts, at the World Robot Conference in Beijing.
by Aug 20, 2018 12:00 am

Robots that can diagnose diseases, play badminton are among the machines China hopes could revolutionize its economy. Visitors to a Beijing exhibition offered a glimpse of an automated future

The popular stars of this year's World Robot Conference, which ended yesterday, were undoubtedly the small, amateur-made "battle bots" which smashed, hammered and sawed their way through their opponents to a cacophony of cheers and shouts from a rapt audience. "With this robot, I can fully express myself. I love the sparks," said Huang Hongsong, one of around a dozen Chinese youths whose creations went head-to-head. But while the battle bots are designed largely to entertain onlookers, China is deadly serious about riding the robotic wave with an eye on its economy. Cheap manufacturing propelled the populous giant to become the world's second largest economy in just a few decades.

But the country's population is ageing, leaving it facing a double whammy of a worker shortage and increased labor costs as it gets wealthier. Automated machines offer a possible way out with President Xi Jinping in 2014 calling for a "robot revolution."Under the ruling Communist Party's road map for its industrial future - dubbed "Made in China 2025" - state subsidies are pouring into the sector. And at the robot show, a vast array of machines demonstrated how technology may eventually replace human workers.

In one corner, a mechanical arm - designed to teach children - painted an elegant Chinese character while a robotic fish explored its tank and a bat flapped its mechanical wings overhead. By 2020, China is aiming for half of the industrial robots sold in the country to be made by Chinese companies, up from 27 percent currently, with a target of 70 percent by 2025."Robots are the jewel in the crown for the manufacturing industry... a new frontier for our industrial revolution," said Xin Guobin, China's vice minister of industry, as he opened the conference. But it is a delicate balancing act for Chinese policy-makers due to the potential for human job losses - a 2016 World Bank report said automation could threaten up to 77 percent of jobs in China's current labor market. Nonetheless a great robotic leap forward has already been made.

China is now the world's number one market for industrial robots with some 141,000 units sold last year, accounting for a third of global demand, according to the International Federation of Robotics, which says demand could rise an additional 20 percent per year until 2020. Outside China's factories, robots are becoming a more visible presence, deployed in restaurants and banks and even delivering parcels. China's iFlytek, a specialist in speech recognition systems, presented a new "medical assistant" robot at the Beijing show which it said was able to help identify up to 150 diseases and ailments - even passing a national medical qualification exam with a high score. The robot, which operated in conjunction with a doctor, asks patients a series of diagnostic questions and can also analyse X-rays.