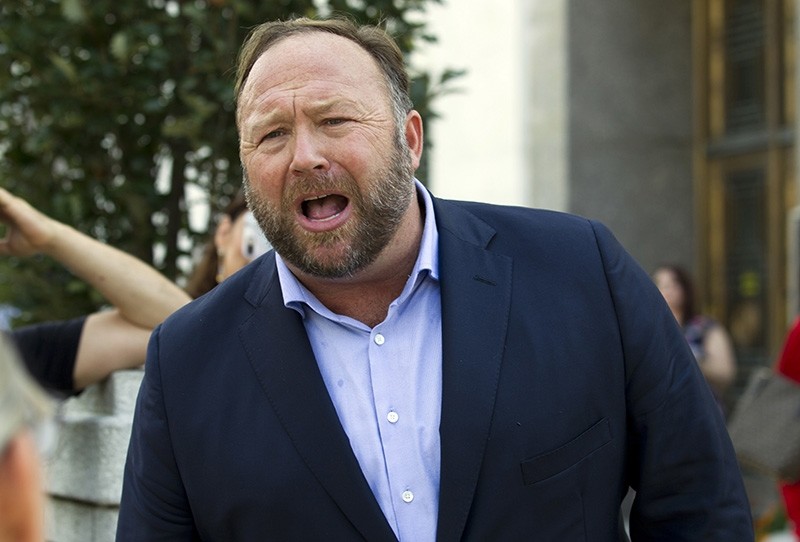 In this Sept. 5, 2018, file photo conspiracy theorist Alex Jones speaks outside of the Dirksen building of Capitol Hill. (AP Photo)
by Compiled from Wire Services Sep 07, 2018 12:00 am

The company said Jones won't be able to create new accounts on Twitter or take over any existing ones. Twitter said Jones posted a video on Wednesday that violates the company's policy against "abusive behavior."

The video in question showed Jones shouting at and berating CNN journalist Oliver Darcy for some 10 minutes in between two congressional hearings focused on social media. Twitter CEO Jack Dorsey testified at both hearings, but did not appear to witness the confrontation.

Twitter had previously suspended Jones for a week. But until now it had resisted muzzling Jones further. Other tech companies have limited Jones by suspending him for longer periods, as Facebook did, and by taking down his pages and radio stations.

Jones heckled Darcy in a public hallway where reporters were waiting to enter the House committee room. He criticized the journalist's reporting and appearance, referencing his "skinny jeans" and repeatedly saying, "just look at this guy's eyes" and "look at that smile."

Darcy has aggressively questioned social media companies about the forbearance they showed Jones, asking why they have allowed him to remain on their platforms for as long as they have.

The announcement came a day after President Donald Trump's administration warned of a possible legal crackdown on big technology companies over competition or political bias, a bombshell announcement that came as social media executives were defending their policies before lawmakers.

The Justice Department statement appeared to escalate a war between the administration and Silicon Valley after a series of attacks by Trump claiming tech firms were biased against conservatives.

The suggestions of legal or regulatory action caught many tech industry observers by surprise and came as lawmakers were holding hearings on foreign influence campaigns on social media and "transparency."

Twitter had previously resisted calls to ban Jones, though it prevented him from posting on his account for a week last month.

Jones is currently active on Facebook; his suspension there recently expired.

Jones is best known for disputing the veracity of the Sept. 11 attacks, the Sandy Hook school massacre and other events.