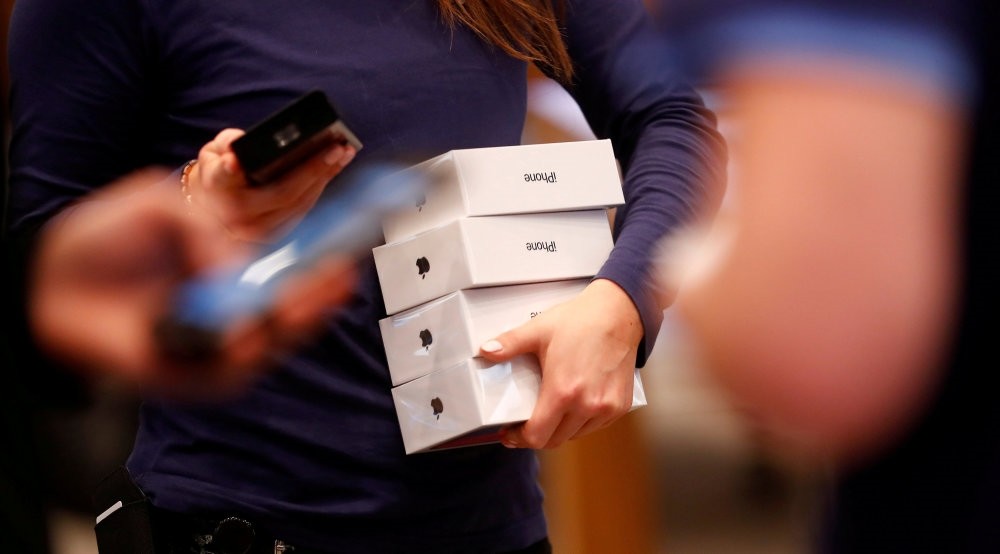 Chip supplier Qualcomm Inc won a second court skirmish in its worldwide patent battle with Apple Inc on Thursday, with the iPhone maker saying it would pull some older models from its German stores.

Qualcomm's win in Germany comes weeks after it secured a court order to ban sales of some iPhone models in China. Apple, which is contesting both rulings, has continued to offer its iPhones in China but made changes to its iOS operating system in the wake of the Chinese order.

The German victory may affect only a few million iPhones out of the hundreds of millions that Apple sells each year. Still, it is a small but clear win in a complex legal battle that will spin into overdrive in the coming months as antitrust regulators and Apple both take Qualcomm to court in the United States.

Apple alleges that Qualcomm engaged in illegal behavior to preserve a monopoly on modem chips, which help mobile devices connect to wireless data networks. Qualcomm has in turn accused Apple of using the chip supplier's vast stable of technology innovations without proper compensation.

While a sales ban in China could hurt Apple's bottom line, it is unlikely the two patent skirmishes will sway the outcome of the broader battle, where Qualcomm has suffered a series of setbacks fighting U.S. antitrust regulators. Qualcomm is not pursuing the software patents in the Chinese case in other jurisdictions and suffered an early loss while pursuing a U.S. sales ban on the U.S. version of the hardware patent at issue in Germany.

On Thursday, Apple said it would pull older iPhones from its German stores after a court ruled that Apple had infringed a hardware patent of Qualcomm Inc and banned sales of iPhones there with chips from Apple supplier Qorvo Inc.

"Two respected courts in two different jurisdictions just in the past two weeks have now confirmed the value of Qualcomm's patents and declared Apple an infringer, ordering a ban on iPhones in the important markets of Germany and China," Don Rosenberg, Qualcomm's general counsel, said in a statement.

For each of the two Apple entities it won orders against, Qualcomm needs to post a bond of about 668.4 million euros, or $765.9 million, before it can begin proceedings to enforce the order, a move Qualcomm said it would carry out "within a few days."

The smartphone maker said it was appealing the decision, but the order goes into effect as soon as Qualcomm posts the bond.

Apple said it would pull some phones from its stores while it pursued an appeal.

"We are of course disappointed by this verdict and we plan to appeal," Apple said in a statement. "All iPhone models remain available to customers through carriers and resellers in 4,300 locations across Germany. During the appeal process, iPhone 7 and iPhone 8 models will not be available at Apple's 15 retail stores in Germany. iPhone XS, iPhone XS Max and iPhone XR will remain available in all our stores." Stacy Rasgon, an analyst with research firm Bernstein, said in a note that Germany was a small iPhone market for Apple, selling about 10 million units a year, with possibly only half of those being the older models affected by the court's order.

When Qualcomm posts the bond to enforce the order, it could seek to extend the ban to Apple's resellers and the newer iPhone models not included thus far, legal experts said.

Qualcomm said the court had granted its request for "a recall and destruction of all accused devices from all retailers in Germany."

But pressing forward with enforcement presents some risks for Qualcomm. In an earlier proceeding before the U.S. International Trade Commission, U.S. regulators viewed a more extensive set of technical evidence about whether Qorvo's chips and Apple's phones violated Qualcomm's patents.

Those U.S. regulators sided with Apple and Qorvo. If higher courts in Germany do the same when Apple appeals, Qualcomm could be forced to forfeit its bond if the decision becomes final.

The German case is Qualcomm's third major effort to secure a ban on Apple's lucrative iPhones over patent infringement allegations after similar efforts in the U.S. and China.

In the United States, Qualcomm sought to ban the import of iPhones with chips from Intel Corp. Trade regulators found Apple had infringed one Qualcomm patent, but so far declined to ban the phones with Intel chips because regulators feared it would hurt competition in the chip marketplace.

"Competition authorities around the world have repeatedly found Qualcomm's licensing practices unlawful, yet Qualcomm continues to try to achieve the same results through a campaign of patent lawsuits," Steven Rodgers, Intel's general counsel, said in a statement after the ruling in Germany. In Germany, the judge ruled that phones with a chip from Apple supplier Qorvo violate one of Qualcomm's patents around so-called envelope tracking, a feature that helps mobile phones save battery power while sending and receiving wireless signals.

Mike Baker, Qorvo's chief intellectual property counsel, said in a statement that U.S. trade regulators had ruled that Qorvo's chips did not violate the U.S. version of Qualcomm's patent and that the chip's inventor wasn't allowed to testify at the German hearing.

"We believe our envelope tracking chip does not infringe the patent in suit, and the court would have come to a different conclusion if it had considered all the evidence," Baker said. In China, Apple is still pursuing a so-called request for reconsideration with the court that issued the bans. Apple said its phones remained on sale and it believed it has complied with the Chinese court's order, but it also made changes to its iPhone software in the wake of the ruling. Qualcomm believes Apple is violating the Chinese court order despite the new software and must stop selling phones there.