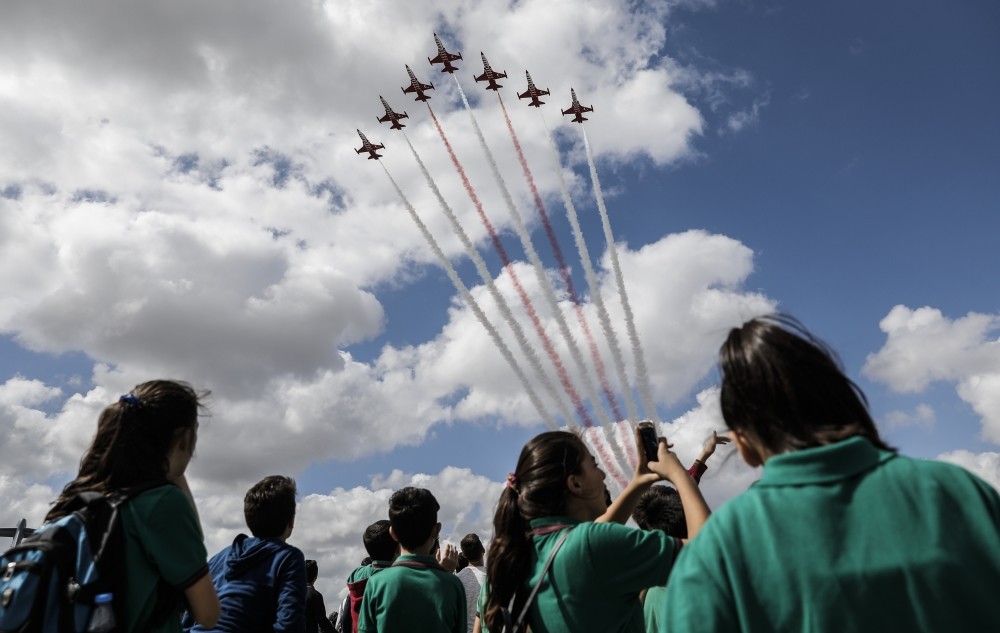 Teknofest Istanbul's second edition will be taking place in September. It aims to attract even more people than last year's 550,000 visitors and further raise awareness on science and technology in society

The world's second largest aviation event was organized for the first time last year at Istanbul Airport and created a stir among young people and was visited by over 550,000 people.

The introductory meeting of the four-day event at Atatürk Airport was held yesterday.

Speaking at the meeting, Presidency of Defense Industries (SSB) Chairman İsmail Demir said the event displays the excitement of young people and the Turkish nation for aerospace and technology. He said they can do much better than what they have done so far in this field as can be seen both in Teknofest 2019 and beyond.

Deputy Minister of Industry and Technology Mehmet Fatih Kacır, who is the Teknofest chairman, recalled that the event welcomed many visitors last year and had thousands of minutes of visual news and tens of thousands of written news. He said that aircrafts carried out 365 sorties and flew over 200 hours during last year's festival.

Kacır reported that Teknofest reached more than 300 million people worldwide. "All of this obviously gave us great excitement and hope and raised our responsibility for 2019 and beyond. We believe that this year we will multiply these figures," he noted.

Stressing that technology competitions constituted the main element of last year's event, Kacır said Teknofest brings together many elements addresses everyone from 7 to 70.

Turkey Technology Team Foundation (T3 Foundation) Board of Trustees Chairman Selçuk Bayraktar, on the other hand, highlighted that Teknofest, which was once a dream, came true with the excitement of young aerospace and technology enthusiasts, the vision of their team, the contribution of the stakeholders and the courtesy of the nation. He added that the National Technology Move came together with hundreds of thousands of young people thanks to Teknofest.

Bayraktar said they intend to create a technology-filled atmosphere that will be easily accessible for visitors from both Turkey and all over the world. "Our aim is to provide a social transformation with the projects of our young people who will carry our country to the top in the technology and aerospace fields," he continued. "Now we are working to close the gap and to get ahead of the world with the sprouting of ideas to be inseminated at the event. We organize the most comprehensive and future-oriented technology competitions in Turkey."

As part of Teknofest, which aims to raise awareness of technology and science in society and increase human resources trained in science and engineering fields in the country, technology competitions will be organized in 19 different categories to support young people working on the technologies of the future.

The event will give away over TL 2 million in prize money for young technology talents, the organizers of the event previously said.

Applications are being accepted at www.teknofestistanbul.org until the end of February. In addition to the prize money, teams will be supported with technical consultancy and supplies.