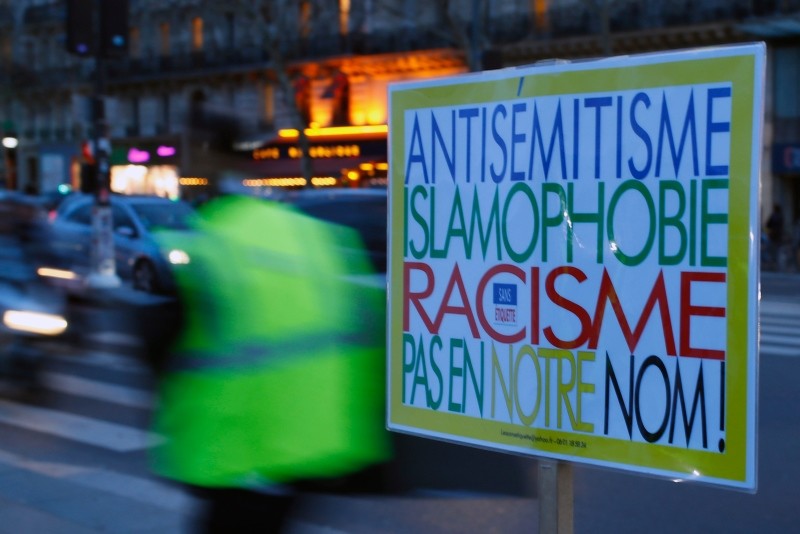 A poster reading ,Anti-Semitism, Islamophobia, Racism, Not in Our Name, during a gathering decrying anti-Semitism at Place de la Republique in Paris, Monday, Feb. 18, 2019, amid an upsurge in anti-Semitism in France. (AP Photo)
by Feb 19, 2019 2:21 pm

Rivarol's Twitter account "called for racial hatred and sympathised with crimes against humanity", a spokesman for the government's racism, anti-Semitism and discrimination body (DILCRAH) said, adding it had repeatedly reported the account to the social media platform.

France, home to the biggest Jewish community in Europe, has seen a sharp rise in anti-Jewish offences reported to police -- up 74 percent last year.

A spate of anti-Semitic vandalism and graffiti in and around Paris in recent weeks has caused fresh alarm and sparked widespread condemnation.

Frederic Potier from DILCRAH welcomed the move by Twitter, saying it was thanks to a push "against online hate speech."

In a tweet on Feb. 13 that has now been removed, the weekly magazine wrote: "When I was a child I didn't understand why Jews were detested by all people, all nations throughout history. Today I don't even ask the question anymore. Actually I do, I wonder why they aren't (detested) more."

Sacha Ghozlan, head of the French Union of Jewish Students, told AFP: "It's an important victory and a brake on this anti-Semitic rag that has been spreading hatred of Jews for years."

"However, there is still a lot of work to be done on Twitter," he said, adding that online abuse of Jews has long gone unpunished.

He said he suspected that Rivarol's editor Jerome Bourbon -- whose own Twitter account was already suspended -- was personally behind the magazine's tweets.

Several rallies against anti-Semitism are planned across France on Tuesday.