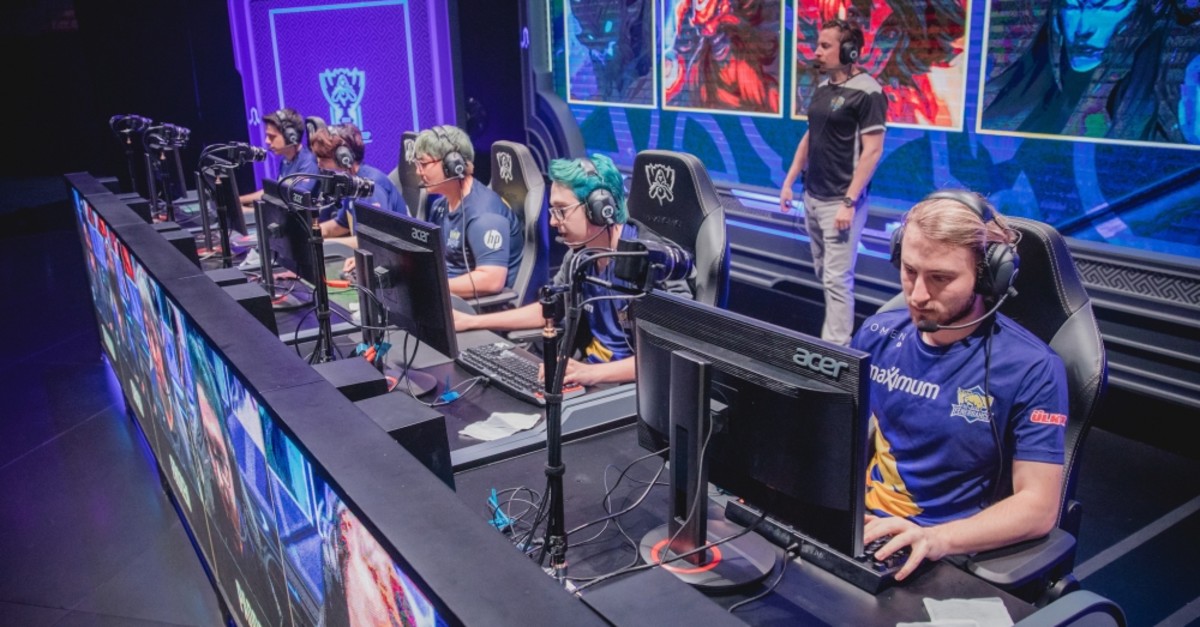 The Turkish startup FalconAI offers personal coaching to esports players who want to improve themselves through the artificial intelligence-backed SenpAI platform.
by Timur Sırt Sep 14, 2019 12:04 am

Turkish startup Falcon AI has recently developed the SenpAI platform that analyzes the matches of esports players with artificial intelligence technology it has developed and offers a personal road map by preparing their digital twins. Falcon AI has also made a patent application in the U.S. for its digital twin project

While artificial intelligence (AI) technology touches the lives of players in an environment where more and more people are interested in esports, the increasing interest increases the number of companies and teams investing in this area. Turkish startups are also developing solutions in the field of esports, which now attract interest that goes beyond just football viewers. The Turkish startup FalconAI, established to develop advanced artificial intelligence technologies and make human experience and knowledge accessible and scalable, is headquartered in Boston. The startup offers personal coaching to esports players who want to improve themselves through the artificial intelligence-backed SenpAI platform. The startup conducts engineering studies in Istanbul, while its global business appetite is based in Boston.

Berk Özer, the founder and CTO of FalconAI, explained their solution, noting that they first analyze match data of esports players and create their digital twins. "We create players' digital twins according to match analysis, skill levels, game styles and characteristics. Based on their digital twins, we offer 100% customized recommendations for players to improve themselves," Özer said. "These recommendations can be viewed both in terms of final performance and match-specific results. We are preparing a road map for the easiest improvement of the weaknesses detected in the last period performance. We support this road map with applicable suggestions and content, such as instructional videos and guides, entirely managed by artificial intelligence."

"In match-specific recommendations, the visualization of match data on a two-dimensional map is shown to players on a per-second basis, and we make recommendations to players by indicating where they made mistakes," Özer said. He added that SenpAI is now offered for the League of Legends game and explained the contribution of the solution they developed. "Artificial intelligence-managed content (videos and guides) aims to make players enjoy the game more by improving themselves. We have designed various content that we provide within the website to enable players to have fun while learning," he noted.

Özer announced the target audience of the project. "In the coming period, we plan to offer similar services to other games, led by Dota 2. We can define our target audience as amateur and professional LoL players who want to improve themselves in general. As our target market, we aim for European countries, especially the U.S. with lots of LoL players," Özer said.

Özer said that they received 2.5 million euros ($2.77 million) in investment from ACT Venture Partners. "We are headquartered in Boston as the founding team. The majority of our team, mostly consisting of engineers, is based in our office in Levent Kolektif House. We aim to market SenpAI, which we developed in Turkey, in the U.S. and the EU and to be number one globally in this field," he noted.

Özer said that SenpAI is the first product introduced by t

he FalconAI startup globally. "We previously developed an artificial intelligence-backed mobile application on Fashion called FashionI and successfully implemented pilot applications in Turkey," he said. "Before the U.S. version of FashionI, we wanted to focus on the global launch of SenpAI in response to the good reactions we received."Özer said that they aim to add value to users in two issues with the SenpAI product. "Thanks to our artificial intelligence-based coaching service, we enable them to identify game dynamics and errors in the game (or development areas) much more easily and practically and develop themselves faster and more efficiently with 100% personalized advice we have developed," Özer concluded.

Entrepreneurs gear up for tech harvest

Agricultural entrepreneurship competition will allow farmers to focus on projects that will enable them to make better use of technological solutions. Winners of the competition will have the chance to participate in İşbank's startup acceleration program Workup. İşbank organizes an Agricultural Entrepreneurship Competition to find innovative technology-based applications in agriculture, one of the important sectors for the national economy, and to contribute to the scaling of these startups.

Startups, by providing details of projects related to agriculture, can apply for the competition until Oct. 1 at https://yarisma.kokprojekt.com. Startups will be selected from the applications, and projects will be evaluated by the esteemed jury members. Just like İşbank, Türk Telekom also continues to support solutions that will increase productivity with its startup acceleration program Pilot. Startups selected after the jury presentations at the end of the competition will be entitled to enter the Workup Entrepreneurship Program, supported by İşbank.

İşbank Vice-Chairman Şahismail Şimşek stressed that sustainable and suitable agriculture for the requirements of the new era could only be achieved by using technology and an innovative approach.

"It is of utmost importance that new startups in the agricultural sector, which has been one of the most important sectors of each period to date, are revealed, scaled and brought together with potential business fields," Şimşek said. "In Turkey, the place of startups in the field of agriculture in the entrepreneurial ecosystem is not at the desired level yet. In this sense, we believe that we will contribute to Turkey's innovation climate with the agriculture sector thanks to our competition."

BV Growth, a joint venture capital investment fund established by Boğaziçi Ventures (BV), founded by partners from the entrepreneurship world who have made successful sales abroad, and Gedik Asset Management to invest in growth-stage technology ventures with the potential to create a global success story became one of the five funds that were entitled to receive investment from the Treasury after successfully completing all the evaluations made within the framework of the 1514 Tech-InvestTR program. Following the Treasury's investment decision, BV Growth Fund will begin its investment process in the coming days by making its first closure with the investor pool, including universities, the Scientific and Technological Research Council of Turkey (TÜBİTAK), private pension companies and leading individuals and institutions of our country.

Boğaziçi Ventures Chairman Barış Özistek, also known for his diverse and active roles in the technology and entrepreneurial ecosystem, emphasized the importance of Treasury investment for the ecosystem and said that investors could benefit from the high returns of the technology world by investing safely in funds that undergo a very challenging and detailed evaluation process. He added that the growth fund would make a great contribution to the ecosystem as technology startups focus on growth, which is the most difficult stage to find funds.

"The active role of the state will accelerate the investment of traditional capital in the world of technology. Thus, we are entering a period where investors and technology entrepreneurs will provide high efficiency," Özistek said.

Kenan Çolpan, board member of Boğaziçi Ventures and chairman of the BV Growth Fund Investment Committee, also known for his high number of angel investments, said that Boğaziçi Ventures' experience of exiting globally successful companies with high valuation is of critical importance in the selection of startups to be invested in by the Fund and the process of selling them to foreign investors. Çolpan added that the BV Growth Fund plans to invest in 60 technology startups in different growth stages with a size of TL 300 million and the potential and competence to go global as only country-based ventures. "In the coming period, Turkey will grow faster than imagined in terms of technology entrepreneurship," he said. Onur Topaç, CEO of Gedik Investment and chairman of Hub Venture (BIST: HUBVC), said for Turkey to enter the path of sustainable high growth, technology startups must be supported and investments in these companies should be increased. "We are honored that we are entitled to receive investment for the BV Growth Fund, which will contribute to increasing employment and technology exports, which are among the most important targets of our country," Topaç continued. "We are fully confident that we will create beautiful success stories with the ecosystem. We aim to make this a beginning and continue to work to contribute to the growth of our country with the new funds we will establish in the future."

Today, the importance of industrial property rights is gradually increasing. To keep up with the competition, to dominate new developments and to grow, companies must first secure their industrial property rights. In the last five years, nearly 100,000 applications for patents and utility models show a significant increase in the past years. However, considering Turkey's potential, this figure is not enough. It is possible to increase these numbers and move ahead of the targets with effective steps to be taken. According to the World Intellectual Property Organization (WIPO), as of 2017, China ranks first among the top three countries worldwide, with more than 1 million applications, followed by the U.S. and Japan. According to an analysis performed by Destek Patent based on TÜRKPATENT's last five-year data, the total number of patent and utility model applications in Turkey from 2014-2018 was approximately 100,000. In this period, 2017 was the brightest period in the patent field, while the highest level in the field of utility model was reached in 2015. According to the data, Istanbul ranks first in patent and utility model applications. After Istanbul, the ranking varies between Ankara, Izmir, Bursa, Manisa and Kocaeli. The total number of applications from Istanbul, Ankara and Bursa in the last five years is around 30,000. Meanwhile, Human Needs class, which covers all human needs from food to household goods, from textiles to health, takes the lead in patent and utility model applications.