Istanbul on radar of aviation, tech enthusiasts as TEKNOFEST kicks off 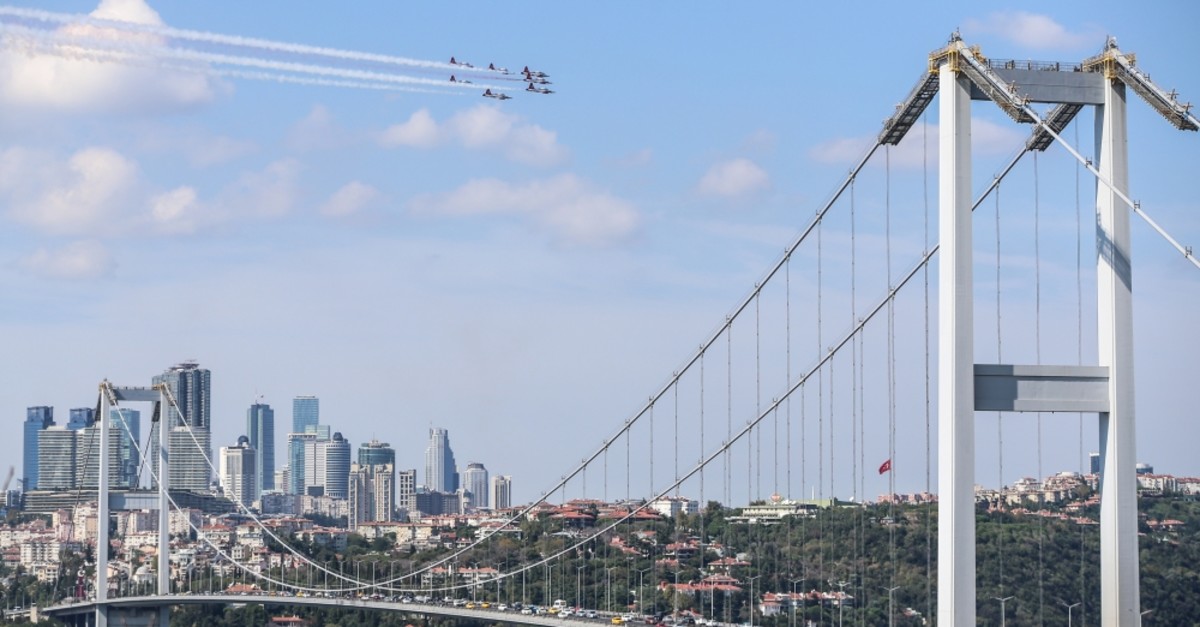 Hundreds of thousands of enthusiasts will have plenty to see this week at Turkey's largest aerospace and tech festival, TEKNOFEST Istanbul. On the sidelines of the six-day event, the latest Turkish products will be showcased

Turkey's most populous city will be the center of attraction for aviation and tech enthusiasts for the next six days with TEKNOFEST Istanbul, the second biggest aviation event in the world.

Kicking off today, the second edition of the event aims to raise awareness about technology and science in society, and increase human resources trained in the fields of science and engineering in the country.

Seeking to turn Turkey into a society that produces technology, the aviation expo aims to showcase the country's rapid advance in technology and to promote technology advances as a national cause. The event is taking place at the now-closed Atatürk Airport and will run until Sept. 22.

Having become one of the leading aerospace events in the world by hosting more than 550,000 visitors in its inaugural year, the event is expected to attract more than 1 million visitors this time around.

It is being supported by several government ministries and bodies, private companies and other academic institutions.

Aviation and tech enthusiasts will have plenty of events to witness during the festival. Organized by the Turkish Technology Team Foundation (T3), the festival will sponsor fun activities in science and technology for all age groups including simulation exercises, team games and aviation activities, in addition to educational activities for kids. As part of TEKNOFEST, technology competitions will be organized in 19 different categories to support young people working on the technologies of the future.

The chairman of T3, Selçuk Bayraktar, previously tweeted that over 100,000 people had registered for the event online.

According to the event's official website, it has received 50,000 applications from 17,373 teams from 81 provinces and 122 countries. Some 10,000 finalists were identified in technology competitions organized in 19 different categories.

The event is promising to give away over TL 2 million in prize money for young technology talents.

Among others, Turkey's T129 Advanced Attack and Tactical Reconnaissance Helicopters (ATAK) will be performing a popular "Harmandalı" folk dance. There will also be additional shows, exhibitions, concerts and many surprise events.

In addition, a congress of Turkish scientists living abroad will be held within the scope of the festival.

LATEST PRODUCTS TO BE SHOWCASED

Among them, leading unmanned aerial platform developer Baykar Makina will exhibit its latest armed drone the Akıncı, an upgraded version of the company's trademark platform Bayraktar TB2 armed drone, which is also to be showcased at the event.

Dubbed "the flying fish," the Akıncı has just recently completed its first engine test and is expected to carry out its first test flight within this year.

The company will also showcase a prototype of Turkey's first domestic flying car called the "Cezeri."

The photos of the prototype's eight-month-long design process, from the initial sketches to its construction, were recently shared by Selçuk Bayraktar, the chief technology officer of Baykar.

On the other hand, Turkish Aerospace Industries Inc. (TAI) will be exhibiting a mockup of the National Combat Aircraft (MMU) for the first time in Turkey at the event.

It will also showcase a number of national projects that have attracted a lot of local and international attention.

The mock-up of the fifth-generation MMU was unveiled at this year's Paris Air Show.

The preliminary design activities of the fifth-generation fighter jet received a TL 4.8 billion incentive certificate. The project will employ 3,200 people, with an indirect employment contribution estimated to be around 11,200.

MOBILE GAME BASED ON ATAK HELICOPTER TO BE LAUNCHED

A mobile game based on the ATAK attack helicopter has been developed and will be launched at the event. The company previously developed a mobile action game "Operation Anka" featuring the new-generation UAV ANKA.

"Operation Atak" will be available following the presentation at the festival. The project has been implemented with the aim of explaining Turkish defense industry products to young people and increasing their interest in technology. It will enable users to experience the power and capabilities of national products through the game.

The game will be available for free on the Google Play and App Store.

Furthermore, Russian jets will also take their places and meet visitors during the aerospace and technology festival.

The Su-57 fighter jet, the latest generation Russian stealth aircraft, and the Beriev Be-200, a multipurpose amphibious aircraft, are expected to carry out flights on the sidelines of the event.

In recent weeks Russian officials said Turkey was interested in securing deals to purchase both types of aircraft.

In the wake of Turkey's suspension from the F-35 jet program by the U.S., Ankara has been mulling alternatives for its warplanes needs. President Recep Tayyip Erdoğan visited Russia's MAKS-2019 airshow late last month, where along with his Russian counterpart Vladimir Putin, he examined the Su-35 and Su-57 jets.