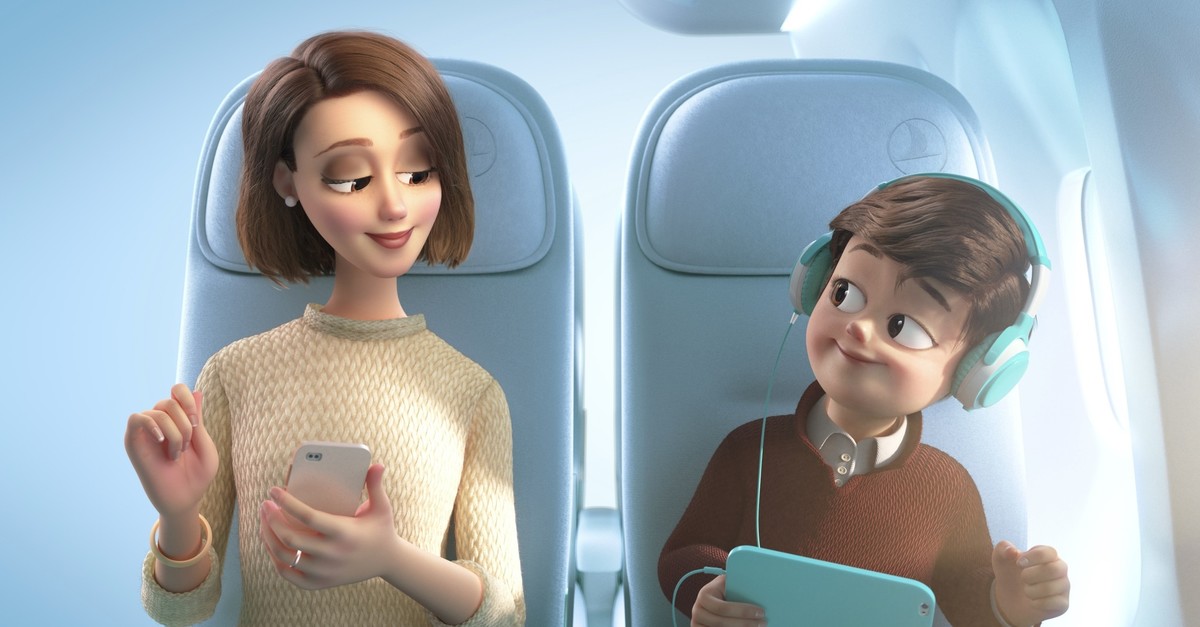 In the new safety video for Turkish Airlines, animation studio Lighthouse is said to have rendered only passengers and important objects in vivid colors, helping passengers to direct their attention to important safety features.
by Timur Sırt Oct 11, 2019 12:24 am

Already known for its entertaining safety videos, Turkish Airline flights will now feature a video produced by a local animation studio which includes storytelling to help passengers relax and direct their attention to the right areas

For a generation that grew up with Japanese anime, it may come as a surprise to encounter animated films produced in Turkey. But from time to time, talented people who are in love with their work can eliminate some stereotypes. I think what has been done with the advertising sector in recent years has encouraged many creative people.

Lighthouse Founder and CEO Arman Şernaz, one of these courageous people, brought together a team with years of experience to create Turkish Airlines' flight safety film. Produced by the skilled members of Sernaz's team it can encourage many local studios on animated films. In other words, both institutions like Turkish Airlines (THY) and studios have shown that international quality work can be done in Turkey.

Although the TV series industry has become an exporting sector in Turkey, almost all channels except for TRT Çocuk, a children's channel by Turkey's public broadcaster, import animation films from abroad. The figures provided by Arman Şernaz about the animation sector are remarkable. Looking at the animation industry in the world, it is estimated that the market volume, which was $122 billion in 2010, reached $300 billion in 2017. From this point of view, it is very costly and risky to make create an animated film in such an appetizing market. If you are not stubborn and determined enough and do not spend your years on this, you will not be able to stand out. Şernaz, on the other hand, is quite excited to talk about his animated films. Forming his team with this infectious excitement, Şernaz relies on the team founded with a long-term investment. Lighthouse Visual Effects, founded in 2008, is rapidly becoming one of the most prestigious visual effects and production studios in the region with its striking, innovative and superior service approach. With over 25 artists and administrative staff experienced in international projects, from concept design to final output, Lighthouse designs, develops, implements, and manufactures international quality works in fields such as 2D and 3D animation, character design, visual effects (VFX) and digital illustration.

Saying that the animation sector in Turkey is not an export item yet, Şernaz points to the shortage of human resources in the sector. "We have a profession that requires both art knowledge and superior technical competence. Unlike the TV series sector, our human resources, which are trained in this field, are scarce, and we lose the best ones to international companies. A considerable portion of the artists we have trained prefer to live and work abroad when they start to work in international quality," Şernaz said. "We can say that Lighthouse is the last stop in Turkey for many artists. At this point, we are trying to remain in close contact with our newly trained youth. In 2019, we signed cooperation agreements with two universities. However, there is a long way to go, and unfortunately, this is not a road for studios to cover alone. Government support is of vital importance here as in any sector."

Şernaz stated that the THY flight safety film project started with the request of a project proposal by Innocean Worldwide Istanbul Creative Agency, which has completed many successful works for THY. "Important productions such as flight safety films are usually made by large studios abroad due to their technological infrastructure and artistic experience. We prepared a presentation including our creative approach and solution methods. Our approach to projects always begins with a very detailed research process," he continued. "Already one of our most important assets that make us and raise us to the international level is our approach to research and development (R&D). While presenting a technical method and suggesting a creative approach, we do very detailed research and focus on correct and memorable, flavor-releasing approaches. We want to make sure that a project that we are sure to work well on paper is progressing with a correct production flow from the construction stage to the point where it meets the audience. This approach is also perhaps the most important production factor that enables large studios abroad to do successful work."

Şernaz stated that they obtained a significant portion of the studio's income from projects abroad, recalling that in 2009, they participated in a pitch opened to the Turkish market to take part in a Fanta advertising projects, the product the Coca-Cola Co. "In this pitch, we emphasized the quality that we always keep in focus, and thanks to the short film we created, we won the pitch and were selected by Coca-Cola as an authorized animation production studio.

"For more than five years, we produced over 25 Fanta commercials broadcast extensively in the U.S., China, South Africa, and MENA (Middle East and North Africa)," Şernaz noted. "Thanks to the R&D activities we carried out in this process, we had the opportunity to increase both our technological infrastructure and our quality of production. Although the studios in Turkey have an advantageous position in the animation sector in terms of qualified labor and cost compared to abroad, the promotion, policies and measures required for the Turkish animation sector to reach a significant level in the global market need to increase."

In Turkey 90% of the animation studios are based in Istanbul, followed by Ankara, Eskişehir and other provinces. According to the "Focus on Animation" report published by the European Commission in 2015, approximately 96% of the full-length animated films and 80% of the animated series are foreign productions. Some 94% of children in the 0-14 age group watch cartoons in our country. These developments reveal that the animation sector is open to improvement. The animation industry has become one of the fastest-growing sectors in the world thanks to the developments in science and technology. The sector, which has made great economic contributions to the U.S., Canada, Europe and some Far East countries, continues to grow in Turkey. However, the greatest value of the sector is not technology, contrary to the common thought, but a skilled and educated human resource. Enterprises that boast of machinery or technology investment, have already come to an end. As a result, small studios have the capabilities of large studios thanks to cloud computing.

Şernaz said that along with the creative approach, the flight safety project has a structure that balances and blends a didactic process focused on explaining the rules clearly, simply and correctly. "The fact that this structure is spread through the film as storytelling naturally brings with it a certain preparation process. While it takes about a month to form the project on paper, refine it and complete its production plans, the film is produced in the remaining six months," he continued.

"Particularly, we avoided the elements that trigger these feelings of passengers who might have a fear of flying. We also used a visual language and tempo that would allow passengers with many different hurries at the beginning of the journey to watch in the simplest and relaxed way without rushing to explain any rules and risking the passengers' understanding of the rules. Finally, in the film, we have rendered only passengers and important objects in vivid colors, helping passengers to direct their attention to the right spots."

An image we often encounter is worn out charging cables that are about to break. Most of the time, problems caused by bending and moving at the connection point are eliminated with stronger products. Anker's Powerline+ cable introduces Apple and Android devices with speed and robustness. The knit body of Anker Powerline+, which can be used both as a data cable and a charger, is a concrete indication of durability. The knit body, which prevents tearing and breakage, has a trendy appearance that put forwards the product's claim to durability. Anker Powerline+ comes with a simple design carrying case that can be opened and closed easily. The carrying case maximizes durability, protects against unwanted damage, and makes it easy to find the Anker Powerline+ when needed. It is made of fiber technology and knitted with kevlar, a stronger and lighter material than steel, and offers a lifetime warranty. Having successfully passed bending tests more than 10,000 times indicates that it will accompany the user for life.

Smartphones working integrated with laptops and desktops make life easier. AR Doodle, available on the Galaxy Note10 and Note10 + also offers a built-in video editor and connection to Windows integration on the Galaxy S10. Galaxy S10 users downloading the update will notice that their smartphone's almost professional camera is even stronger. With the update, the camera's night mode can also be used on the front camera. Users will thus have more freedom to take vivid pictures after sunset. With the update, the device will develop a super stable video stabilization feature. With AR Doodle, users will be able to enrich their videos with fun, augmented reality-backed drawings and messages. Live Focus video will add a bokeh effect to videos shot with the front or rear camera.

When Galaxy S10 users shoot an unforgettable video, they can make it worth sharing with the many tools available in the video editor accessible from the Gallery app. This versatile feature lets you easily edit videos almost like a professional, with options to cut and merge videos, adjust playback speed and more. You can even add subtitles and background music to make your content richer.