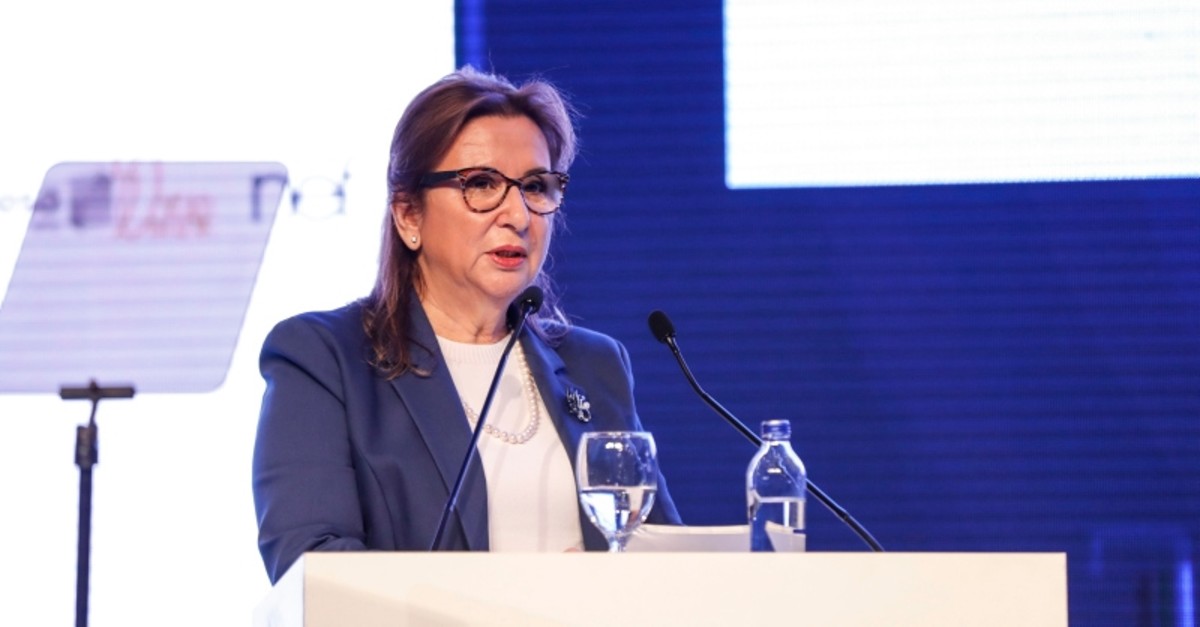 The government aims to increase Turkey's exports of high-technology products around the world as innovation and research and development, coupled with qualified human resources, are the new criteria for economic growth

Although global commerce has been hit hard by prolonged trade wars caused by protectionist policies, Turkey is aiming to expand its share of high-tech products, Trade Minister Ruhsar Pekcan said Friday during the 2023 Summit organized by Turkish daily Sabah in Istanbul.
In order to understand the route Turkish exports will and must follow over the course of the next midterm, it is first essential to comprehend the dynamics influencing the current direction of trade wars, Pekcan remarked.
The share of developing countries in terms of global gross domestic production (GDP) have been on a constant rise since the 2000s, while developed countries' shares have been decreasing. “The shrinkage in the GDP share of developed countries have compelled them to take protectionist measures in trade,” the minister indicated.
Pekcan further elaborated that while developing countries presided over 34.7% share of the global goods trade in 2000, this ratio had since surged to 48.3%. Moreover, while developing countries shared 43% of global GDP, this has since shot up to 59%. The trade minister also drew attention to the downward revisions of the global growth and trade estimates by international monitoring agencies. “The World Trade Organization (WTO) initially estimated that the global trade would grow 4% this year and gradually revised its estimates down to 2.6%,” she said.
The economic growth of the countries that top the list of Turkish export markets is staggering, she remarked.
Pekcan stressed however that Turkey has still managed to post a successful performance throughout this year despite global political and economic uncertainties. The TWO data revealed that the exports of the top 50 countries had fallen 2.6% by the end of August. Yet, she remarked, Turkey’s exports rose by 2.9% in the said period, therefore Turkey ranked 7th among the top 50 exporters in the world.
HIGH-TECH EXPORTS, TRADE WARS
The trade minister highlighted that the exports of high technology products would become the main drivers of ongoing global trade wars.
In 2000, high-tech exports from the U.S. clocked up a value of $176 billion, but by last year, this figure had fallen to $117 billion. As opposed to diminishing U.S. high-tech exports, China recorded a remarkable growth. The high-tech exports of Far Eastern country in 2000 was only $49 billion, but has since surged to $504 billion according to last year's figures. This figure surpasses the aggregate high-tech product exports of the U.S., Germany and Japan, she said.
Turkish exports, have certainly not remained unperturbed by the far-reaching implications of global trade wars. Around $7.2 billion of the $168.1 billion Turkish exports were affected by the protectionist measures of the countries. The figure has risen to $11 billion so far this year. “We are also taking measures to protect our exporters and producers. The measures we have put on imports worth $41 billion,” Pekcan said.
The trade minister also emphasized that low-cost labor and a high population were no longer the definitive criteria for economic growth. “Research and development activities, high-tech production and qualified human resources are now the main instigators of the economic expansion,” she opined and continued, “Therefore we are working to increase our high-tech product exports. To that end, we have formed incentives schemes for the specialized trade zones where the high technology products are mostly manufactured.” She noted that the ratio of the high-tech product exports of the specialized zones is 9% and the aim is to raise this figure the average of Organization for Economic Co-operation and Development (OECD) – which is 14%.
Turkey has drawn up an export master plan to diversify its range of export products and to include more high-technology goods in the export basket. Prepared as a result of meticulous efforts carried out by the Trade Ministry in close cooperation with relevant stakeholders, Turkey in August announced its Export Master Plan to achieve sustainable exports.
Turkey aims to extend the positive performance of its foreign sales in the coming years and develop and increase the volume, tech composition and added-value of its exports. As part of the new road map, it has selected 17 target countries to where it aims to double its exports, and five target sectors. Among 17 target countries are the U.S., Brazil, China, Ethiopia, Morocco, South Africa, South Korea, India, Iraq, the U.K., Japan, Kenya, Malaysia, Mexico, Uzbekistan, Russia and Chile, respectively.
10-MONTH EXPORTS
Turkey's exports amounted to around $16.34 billion in October according to the general trade system, while its imports increased by 10.8%, reaching nearly $18.18 billion, according to data revealed by Trade Ministry together with Turkish Exporters Assembly (TİM). Exports totaled $148.84 billion in the January-October period, rising 2.1% year-on-year. Imports, on the other hand, have reached $172.71 billion, down by 13.2% compared to the same period of last year. The country’s foreign trade deficit decreased by 55.6% over a 10-month period, totaling $23.22 billion.
Last Update: Dec 20, 2019 2:02 am
RELATED TOPICS