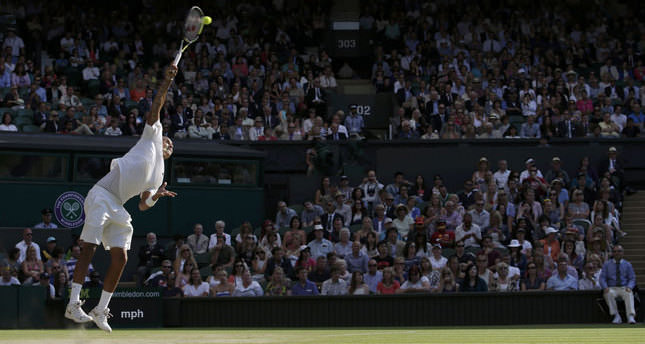 by Jul 01, 2014 12:00 am
Australia's world number 144 Nick Kyrgios caused one of the greatest Wimbledon sensations on Tuesday when he sent world number one and 14-time Grand Slam title winner Rafael Nadal crashing to a shock fourth round defeat.

He is also the first player ranked outside the top 100 to defeat a world number one since Andrei Olhovskiy stunned Jim Courier in the Wimbledon third round in 1992.

It was a performance of brutal inventiveness and uninhibited bludgeoning from a man who had had to save nine match points in his second round win against Richard Gasquet and his reward is a clash with Canada's Milos Raonic for a place in the semi-finals.

For Nadal, the 2008 and 2010 champion, it was a third successive disappointing Wimbledon with Tuesday's fourth round loss following a first round exit last year and a second round defeat in 2012.

All three defeats were against players outside the top 100. But he cannot argue with the statistics of Tuesday's Centre Court demolition which showed Kyrgios firing 37 aces and 70 winners as a new star was born.

"I was in a bit of a zone out there. It hasn't sunk in at all what's just played out out there," said Kyrgios.

"I played some extraordinary tennis. I was struggling a little bit on return but I worked my way into it and I got that break in the fourth set. I served at a really good level all throughout the match so I was really happy."

He said he always believed he could cause a sensation regardless of the status of Nadal who had arrived at Wimbledon having wrapped up a ninth French Open title.

"You've got to believe that you can win the match from the start and I definitely thought that. I'm playing some unbelievable tennis on the grass."
Nadal said defeat was hard to take as he only lost serve once.

"On a surface like this when he serves and hits every ball strongly, you are in trouble," said the second seed.

"I didn't think I played that badly. I was better in the first and third sets but I wasn't able to convert my opportunities. He was better at the other times. He did the things he needed to do to win on grass better than me." Nadal added: "I congratulate him. For me? The beach."

For the fourth match in succession at this year's Wimbledon, Nadal dropped the first set against a confident Kyrgios, the player of Greek-Malaysian origin firing 13 aces and 22 winners past the bewildered Spaniard in the opener.

The Australian, showing no stagefright on his Centre Court bow, showed a brash disregard for the occasion, attempting a cheeky 'tweener' (hitting the ball from between the legs) in the seventh game of the second set. But Nadal then levelled the tie by converting the first break points of the match in the 12th game.

That would usually signal the beginning of the end for an opponent of Nadal, but Kyrgios dug deep to seize his moment. He saved a set point in the 12th game of the third set before again dominating the tiebreak to take it courtesy of a vicious run around forehand cross-courter off a Nadal second serve.

With Nadal wilting beneath the barrage, Kyrgios broke for a 3-1 lead in the fourth set and he wasn't going to let up. He worked his way confidently to three match points but only needed one with his 37th ace shooting past the flat-footed Nadal.