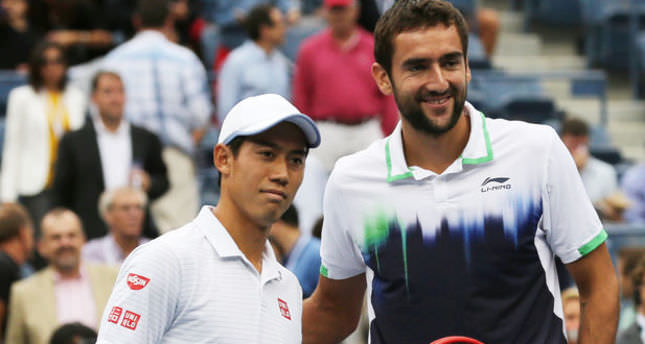 Japan's Kei Nishikori won't leave New York as the first Asian man with a Grand Slam title, but his riveting run at the U.S. Open has brought new life to a dormant sport in his homeland

For over three-quarters of a century men's tennis in Japan has played out like a kabuki tragedy, filled with decades of barren results, embarrassments and even a suicide.

Although Kei Nishikori was beaten 6-3 6-3 6-3 by Marin Cilic in Monday's final, his riveting run at the U.S. Open has brought new life to a dormant sport in his homeland.

Like so many of Japan's sporting greats, Nishikori's path to stardom led to the United States, where his raw ability was refined and he developed into a top-10 player. With no English but plenty of big dreams, Nishikori was 14 when he left his hometown of Matsue on Japan's west coast for the United States in the hope of becoming an elite player.

Like so many others with similar aspirations, Nishikori beat a path to Bollettieri Academy in Bradenton, Florida, a tennis factory that has manufactured great champions such as Andre Agassi and Maria Sharapova.

It was here where Nishikori was given the Project 45 nickname. In the Open Era no Japanese man had climbed higher than 46 in the world rankings and Nishikori's original goal, long since reached, was to top Shuzo Matsuoka's modest achievement.

The excitement surrounding Nishikori's rise is in stark contrast to the fall of Japan's last great men's player Jiro Satho, who reached five grand slam semi-finals before committing suicide in 1934 by jumping over the side of a ship as he travelled to a Davis Cup tie. Nishikori went one better than Satho to become the first Asian man to reach a grand slam final by pushing aside some of the game's greatest champions and biggest names at Flushing Meadows.

But the road the 24-year-old counter- puncher travelled was as much about will as skill. To reach the final, Nishikori ground out five-set victories over fifth seed Milos Raonic and third seed Stan Wawrinka before dismissing world number one Novak Djokovic in a sweltering Arthur Ashe Stadium showdown.

Even before the final, he had made the U.S. Open record books by playing in the joint latest finishing match ever when he wrapped up his fourth round encounter with Raonic. That Nishikori would display such grit and deep determination was not out of character. His American coach Michael Chang, a former grand slam champion, survived on similar terrier-like instincts. Nishikori's trademark leaping forehands are reminiscent of a young French Open champion Chang, who has urged his student to be ever more aggressive. "It's been working well," said Nishikori, who now calls Bradenton home. While Nishikori has won just five ATP Tour titles, including two this season, he is already among the sport's top earners. Before the U.S.

Open, Nishikori trailed only the "Big Four" of Roger Federer, Rafa Nadal, Novak Djokovic and Andy Murray by pulling in an estimated income of $11 million (TL 24.1 million), according to Forbes. The bulk of that comes from endorsements from a nation obsessed with soccer, baseball and golf. A number of Japanese men have found fame and fortune away from their homeland but never before on the tennis court.