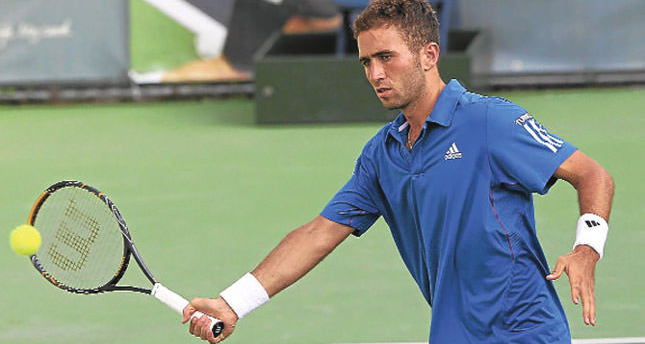 Stan Wawrinka’s title defense got off to a flying start at the Australian Open with the Swiss easing past Turkish battler Marsel İlhan 6-1 6-4 6-2 to reach the second round. İlhan is Turkey’s first player to crack the singles top-100

Coming back to the Australian Open as defending champion has felt surreal at times for Stan Wawrinka but the Swiss fourth seed was all business in his first-round thrashing of Turkish trailblazer Marsel İlhan. Already appearing jaded by the media attention in the leadup, the 29-year-old Wawrinka was keen to break the seal on his title defense and was a man in a hurry as he dispatched İlhan 6-1 6-4 6-2 in a tick under 90 minutes on a warm and windy day at Rod Laver Arena. It may have been an even quicker kill if Wawrinka had not turned the match into an impromptu training session halfway through.

"I'm focused on winning the match. But in the second set I was trying a little bit to be more aggressive, trying a few things that I do maybe more in the practice," the hard-hitting Swiss told reporters. Wawrinka will next play either accomplished Spaniard Pablo Andujar or Romanian qualifier Marius Copil.

The only solace either might take from a video review of Wawrinka's match was the Swiss battling to land more than half his first serves. Barring that, it was a routine thrashing of a high seed against a 100th-ranked journeyman, with 34 crisply-struck winners singing off the Swiss's racquet.

Uzbekistan-born İlhan became his country's first player in singles at a grand slam when he broke into the main draw at the 2009 U.S. Open and he remains the only Turk to have done so. He is also Turkey's first player to crack the singles top-100, achieving that in 2010 and peaking at 87 the following year.

Turkey boasts a WTA event and has hosted some of the biggest names in women's tennis but producing an A-grade player has proven more difficult. Only one other Turk has played grand slam tennis, women's doubles player İpek Şenoglu, who made the breakthrough in 2004 when she partnered Laura Granville in a run to the U.S. Open third round. As Turkey's first and, arguably, only notable player, Şenoglu was given the privilege of playing a gimmicky 2005 exhibition with American seven-times grand slam champion Venus Williams on Istanbul's Bosporus Bridge, the match said to be the first to span the European and Asian continent.

Though lagging behind Eastern European neighbors, 18-year-old İpek Soylu may be the country's best bet of raising its tennis profile after teaming up with Swiss Jil Teichmann to win the U.S. Open girls' doubles title last year.

Elsewhere, four-time Australian Open champion Novak Djokovic returned to the Rod Laver Arena for the first time as a husband and father, shrugging off the effects of a cold to beat No. 116-ranked Aljaz Bedene 6-3, 6-2, 6-4 in his first-round match yesterday. Djokovic won the first of his seven major titles at the 2008 Australian Open, then won here in three consecutive years from 2011 to 2013. His 25-match winning streak at Melbourne Park ended in a quarterfinal loss last year to Stan Wawrinka, who went on to win the title.

Wimbledon champion Petra Kvitova is through to the second round of the Australian Open after a 6-1, 6-4 win over Richel Hogenkamp of the Netherlands in 63 minutes on yesterday. Kvitova won her second Wimbledon title last year, beating Canadian Eugenie Bouchard in the final, to remain the only player born in the 1990s to win a Grand Slam title.

Caroline Wozniacki saved seven of eight break points she faced to withstand a tough challenge from 18-year-old American Taylor Townsend, winning 7-6 (1), 6-2 in the first round of the Australian Open yesterday.