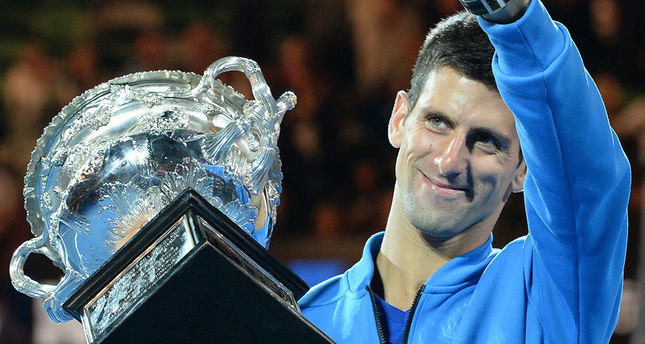 by Feb 01, 2015 12:00 am
Novak Djokovic may have garnered a reputation as the crown prince of pranksters in tennis but on Sunday he firmly established him as the king of Melbourne's blue hardcourts with his fifth Australian Open title. The 27-year-old Serb clinched his fourth title in the past five years, and eighth grand slam overall, with the 7-6(5) 6-7(4) 6-3 6-0 victory over Andy Murray, a loss for the Briton that was his fourth in as many Melbourne finals. Three of those have been at the hands of Djokovic, while he also lost to Roger Federer in 2010. Since Djokovic won his first grand slam title in 2008 he has compiled a 47-3 record in Melbourne. His reign means he has the record for most Australian Open titles in the Open era, one behind Australia's Roy Emerson who dominated in the 1960s.

"I'm so privileged and grateful to be standing here as a champion for the fifth time," Djokovic said after Emerson presented him with the trophy.

"To be in the elite group of players, with Roy Emerson as well. It is an honour playing in front of you."

Despite Murray's poor record against the Serb - he had lost seven of their past eight encounters - he had arguably entered the final as a slight favourite.

Djokovic had struggled in his semi-final against defending champion Stan Wawrinka, while Murray had played superb back to back matches to beat 10th seed Grigor Dimitrov and then seventh seed Tomas Berdych in a tempestuous semi-final. "I would like congratulate Novak on his fifth Australian Open," Murray said. "Fantastic, an incredible record, and thoroughly deserved."