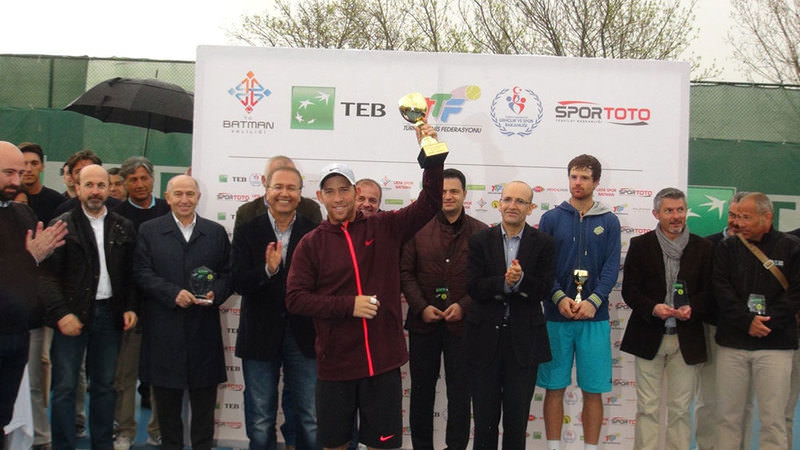 by daily sabah Apr 12, 2015 12:00 am
The ATP Challenger International Tennis Tournament in Batman, held at the Turkish Petroleum Corporation facilities, ended on Sunday with Israeli Dudi Sela beating his Slovenian rival Blaz Kavcic in the final match to claim the trophy.

The Batman Challenger 2015 Men's Singles Cup was watched by Minister of Finance Mehmet Şimşek, who is from Batman and is also a tennis lover, who gave the tournament trophy to Sela. Şimşek said, "I hope our east and southeast regions come onto the agenda with events like this." Şimşek said, "We watched a very beautiful game. Such events contribute very much to Batman. It encourages brotherhood, strengthening unity, solidarity and international tolerance. I'm very happy this tournament was held in Batman." Şimşek also thanked Turkish Tennis Federation President Cengiz Durmuş and Turkish Petroleum Corporation Regional Director Gökhan Akın.

Fifty athletes from 17 countries participated in the tournament. Minister Şimşek made his mark with his performance in the Fifth Traditional Turkey Tennis Tournament, organized by Çınar&Çınar Law Office last September. Hosted by Norwegian ambassador to Ankara Janis Bjorn Kanavin, the tournament was undertaken by MTL Organizations and Guinness record holder Onur Tümer. Şimşek and his partner, Tennis Federation President Osman Tural, made it to the finals, beating their lawyer opponents Hakan Çınar and Argun Bozkurt 2-0. Şimşek attracted attention with his effective serves. Şimşek and Tural easily beat their opponents in the high-speed game.

Şimşek said that he cannot find time for sports due to his busy schedule and added people should do sports no matter what. "Football, tennis, running, basketball or volleyball, it does not matter. The significant thing is a healthier life. Sports are important. I have been playing tennis for three years. I am not as good as I want to be, but at least I can blow off steam," Şimşek said.
Last Update: Apr 12, 2015 11:23 pm
RELATED TOPICS