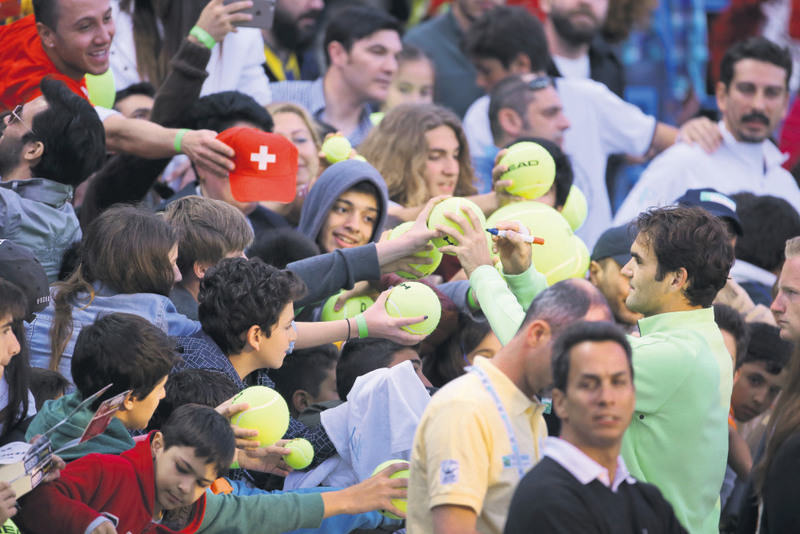 World No. 2 tennis star Roger Federer has won the Istanbul Open - his 85th ATP World Tour title and first title on red clay for over a half a decade

Roger Federer defeated Pablo Cuevas of Uruguay to clinch the Istanbul Open on Sunday for his 85th career crown and first title on red clay for over a half a decade.

The Swiss world No. 2 and 17-time Grand Slam winner showed imperious form ahead of the French Open, beating world No. 23 Cuevas after a thrilling second set tie break.

Top seed Federer showed dexterity and power despite resolute defense from his opponent, who required two injury timeouts for treatment on his wrist, to win through 6-3, 7-6 (13/11) in one hour 36 minutes.

"It's been a while since I won a title on clay," said a delighted Federer. "It's been a pleasure playing here."

"I picked up confidence and I picked up another title. I feel really good about my game now. It's been a fitness test and a mental test."

Federer has been given celebrity status in Istanbul over the last week on his first ever appearance in the country with banners around the court reading "Welcome to Turkey, King" and the crowd chanting his name.

In the first set, Federer raced to 4-1 lead in just 20 minutes, adapting better to the slow conditions on the court after a heavy afternoon shower before the match.

He also showed none of the weakness on this first serve that had plagued his game earlier in the week, with an overall first serve percentage of 70 percent and firing down seven aces.

With Federer serving for the first set, Cuevas let out a howl of frustration as he missed the baseline yet again.

Cuevas' problems mounted in the second set when he called two injury timeouts for treatment from the trainer on his wrist.

Federer, on top of his game and thrilling the crowd, broke Cuevas in the seventh game with a well taken forehand volley.

But Cuevas shrugged off the injury and began to play potently from the baseline, seizing his chance to break back immediately and level at 4-4 and saved three break points on his own serve with some superb baseline play.

The second set went to a tie break with the pair beginning to exchange thrilling rallies.

Federer then took his mini-break when Cuevas badly mishit a forehand but the Uruguayan levelled with attacking play of his own.

Showing the tension, Cuevas double faulted but Federer missed a chance on match point when he pushed a possible backhand winner into the tramlines.

Cuevas then himself missed an easy forehand volley on set point and Federer saved another set point with an outstanding backhand return winner.

But with Federer now playing some brilliant attacking tennis, he finally converted a match point to win the tie-break 13/11.

The tie-break was a fitting conclusion to Turkey's first ever ATP World Tour tournament and Federer expressed satisfaction that the match had such a dramatic conclusion.

"The tie break was crazy," he told reporters.

"There was a good atmosphere and winning 6-3, 6-3 would not have been the same thrill. It was tough and Pablo played really well. I tried to stay aggressive."Federer said his recovery would now be important after the series of testing matches in Istanbul as "you don't want to roll into the French Open tired."

He said he would take some days off ahead of the upcoming Madrid Open and would then decide whether to play in Rome the subsequent week.

Cuevas admitted he had struggled to adapt to the slow conditions, with the balls "not as fast as I wanted them to be."