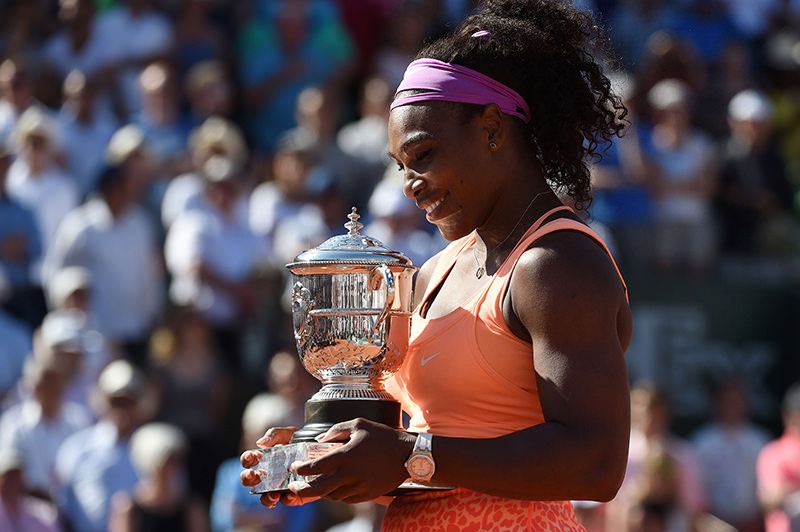 US Serena Williams celebrates with the trophy following her victory over Czech Republic's Lucie Safarova at the end of the women's final match of the Roland Garros 2015 French Tennis Open in Paris on June 6, 2015. (AFP Photo)
by Jun 06, 2015 12:00 am
Serena Williams won her 20th Grand Slam title and third French Open crown at Roland Garros on Saturday, clawing her way back from a break down in the last set to defeat Lucie Safarova 6-3, 6-7 (2/7), 6-2.

It what was a disjointed affair, the 33-year-old American was coasting to a straight-sets win, a set and 4-1 up against the Czech 13th seed, playing in her first Grand Slam final at the age of 28.

But a combination of serving woes for Williams and some top play from Safarova forced a third set, the fifth of the tournament for the American.

She fell 0-2 down in that, but recovered her composure in the nick of time to rattle off six games in a row for the title.

With 20 Grand Slam titles Williams is now second on the Open-era list, two shy of Steffi Graf. She is also now halfway to winning all four Grand Slam titles, in the same year, a feat previously achieved by just three other women, the last being Graf in 1988.

For Safarova, who reached the final without dropping a set, the consolation will be her debut in the world top 10, at number seven. And she has the women's doubles final to follow on Sunday, playing with American Bethanie Mattek-Sands.

Williams had struggled with a bout of the flu throughout the tournament's second week, needing four times to fight back from a set down just to reach the final.

But after two days of "rest and therapy" in her Paris apartment she came out looking somewhat refreshed if more subdued than usual as she stared fixedly at the ground between points.

She played well within herself on serve, taking pace off her first ball and then allowing Safarova an easy hold to level.

But the American upped the pace suddenly in the fourth game, clinching the first break of the match with a scorching forehand crosscourt winner.

Safarova top-edged two returns high up into the crowd as the American continued to crank up the pressure, but the Czech player stayed in touch with a hold for 4-2.

Williams let out two loud "c'mons" as she held serve for the fourth straight time to make it 5-2 and two games later the first set was in the bag in just 31 minutes. Safarova had failed to muster a single break point.

Williams had never failed to win a Grand Slam title on the 17 occasions she had taken the first set, and she honed in on another straight sets win by breaking serve to open the second and then holding to love.

Safarova had a mountain to climb as the crowd tried to rally her, but another service loss saw her fall 4-1 behind.

Out of the blue though Williams, suddenly flung the Brno-born player a lifeline, double-faulting twice to drop serve.

Two games later she was undone again by some loose shot-making and another double fault. Against all the odds and to general surprise, Safarova was level at 4-4.

Williams served for the match at 6-5 after another break, but Safarova produced her best tennis of the final to force the tie-break, which she won easily.

Safarova moved 2-0 up in the third before Williams resurfaced, taking six games in a row for the win.

At 33 years and 254 days Williams is just nine days younger than was Martina Navratilova, who became the oldest Open-era Grand Slam winner at Wimbledon 1990.

She will now switch her focus onto Wimbledon which starts in three weeks where a title win would give her all four Grand Slam crowns at the same time -- a feat she previously achieved when she won the 2003 Australian Open.
Last Update: Jun 06, 2015 6:48 pm
RELATED TOPICS