Venus back to Bosporus Bridge after 10 years 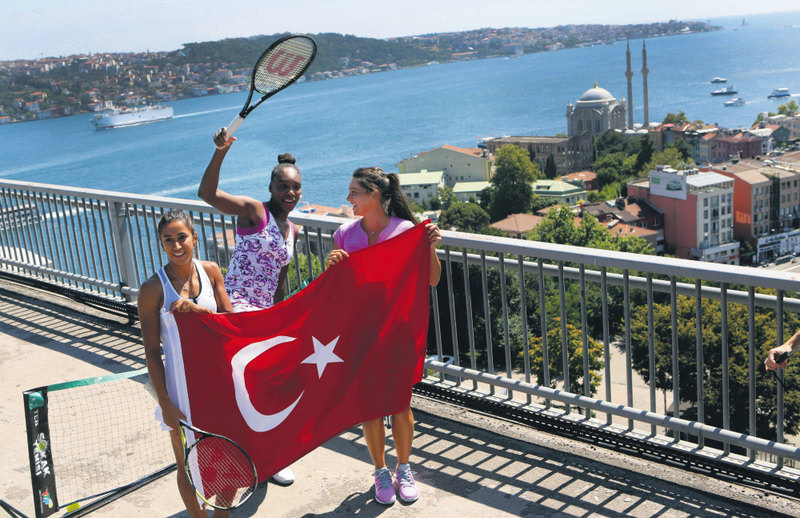 American professional tennis player Venus Williams, who is a former world number 1, and is ranked 15th in the world in singles, is headlining the TEB BNP Paribas Istanbul Cup, a hard court event in its second year back on the Women's Tennis Association (WTA) calendar. Williams was the tournament's very first winner in its first incarnation as a clay court event 10 years ago.

This time the bridge was not closed for the match. After the exhibition match, the American star hit the ball into the cool waters of the Bosporus.

Speaking in the presentation of the tournament in Istanbul, Turkish Tennis Federation Chairman Cengiz Durmuş said, "The TEB BNP Paribas Istanbul Cup is one of the most distinguished organizations in WTA. Turkey has succeeded to be a tennis country. We hold more than 100 tournaments in our country."

Venus Williams said: "Tennis is not the number one sport in Turkey but it will be more popular. To be a number one is not easy in tennis. Because you have to be very strong all the time. In Turkey, there are promising tennis players such as Çağla Büyükakçay, İpek Soylu." "In my last visit to Istanbul I could not see many places. I hope I can see this time. [My sister] Serena won here and I hope I can too. Tennis is more difficult nowadays and we're going through a more challenging period. I'm proud of my world number 1 player sister Serena. Having won so many Grand Slams, she is about to do what no one could do before. The resource of our motivation is to desire for victory. Just win! It's the biggest motivation for us." she added.

Two other top 25 players will join Williams, WTA Rising Star Elina Svitolina, the number 2 seed and former world number 1 Jelena Jankovic, now the number 3 seed. Both players are coming off Grand Slam breakthroughs - Svitolina reached the first Grand Slam quarterfinal of her career at Roland Garros while Jankovic got her biggest win at a Slam at Wimbledon, ousting then world number 2 Petra Kvitova.

Meanwhile, Sara Errani is headlining the Nürnberger Gastein Ladies, a clay court event in its ninth straight year on the WTA calendar. The Italian is fresh off reaching the final of another International-level clay court event in Bucharest, Romania, and hopes to carry that momentum into Bad Gastein. The number 1 seed in Bad Gastein, Errani will begin against an undetermined qualifier or lucky loser.

Errani's biggest competition for the title could come from the number 2 seed, Samantha Stosur, like Errani a former French Open finalist and top 5 player. Stosur lost early in Bastad last week but is hoping to rebound in Bad Gastein. She will also begin against an undetermined qualifier or lucky loser.