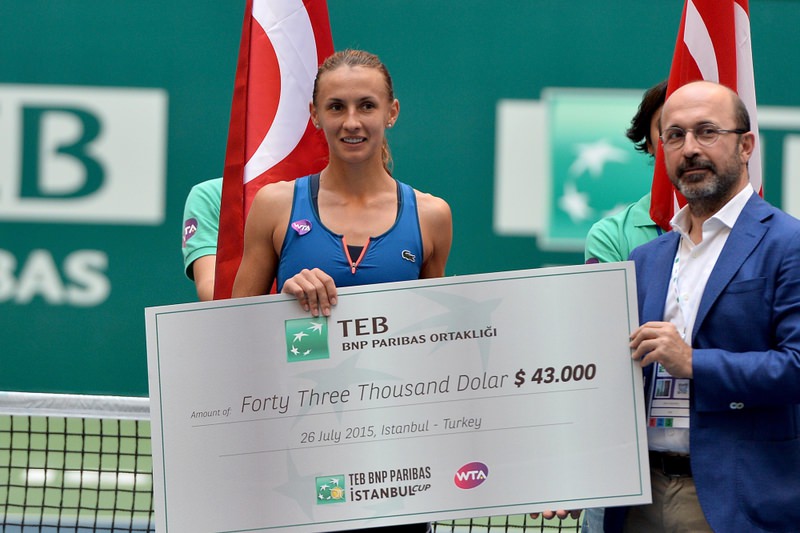 Lesia Tsurenko won her first WTA Tour title after beating Urszula Radwanska in the final of the TEB BNP Istanbul Cup. Winning for the second time in Istanbul she said, ‘Istanbul brings me luck'

The 26-year-old from Kiev was competing in her first final while Radwanska, the younger sister of Agnieszka, fell to 0-2 in championship matches after losing to Russian Nadia Petrova in the 's-Hertogenbosch final in 2012.

Radwanska, the world number 99, wasted three set points with Tsurenko serving at 5-4 down in the opener before the Ukrainian reeled off seven games in a row to take control of the match. "When I saw the draw it looked tough, but I believe that if you go to a tournament you can win it. I had won a cup in Istanbul before and I can say Istanbul brings me luck," Tsurenko said. "You have to think like this. I'm so happy I could win here and show good tennis. That's my goal, getting good results." Tsurenko saved three set points on serve in the opening set before winning nine of the next 10 games to secure her maiden title in one hour and 32 minutes.

It's the second time Radwanska has been defeated in a WTA final after her loss in Rosmalen three years ago.

After the match the finalists were given awards in a ceremony. Tsurenko was given a prize of $43,000 while Radwanska won $21,400. Unheralded Ukrainian Tsurenko had never featured in a WTA final prior to her exploits in Turkey this week, but she was by no means overawed by the occasion as Radwanska was beaten 7-5 6-1 on Sunday. It may have been a different story had Radwanska managed to win one of three set points in the first set, but the Pole endured more disappointment three years after losing her only other WTA final against Nadia Petrova on the grass in 's-Hertogenbosch.

The resilient Tsurenko saved six of the seven break points Radwanska fashioned and claimed five breaks of her own to come out on top in the hard-court event.

Radwanska - who suffered with a shoulder problem last year - was on the back foot when she trailed 3-1 in the first set, but she battled back to level at 3-3 with her first break of the match.

The world number 99, previously ranked as high as 29, was on the verge of going a set up when she had three set points in the 10th game, but Tsurenko hung in there to make it 5-5. Tsurenko, ranked 71st in the world, put Radwanska under pressure in the next game and duly claimed a second break after her opponent had fought back from 0-40 to deuce then served out the set.

Tsurenko was in a rush to get the job done as she raced into a 4-0 lead in the second set and served out the match to love in emphatic fashion to claim her maiden title.
Last Update: Jul 27, 2015 10:38 pm
RELATED TOPICS