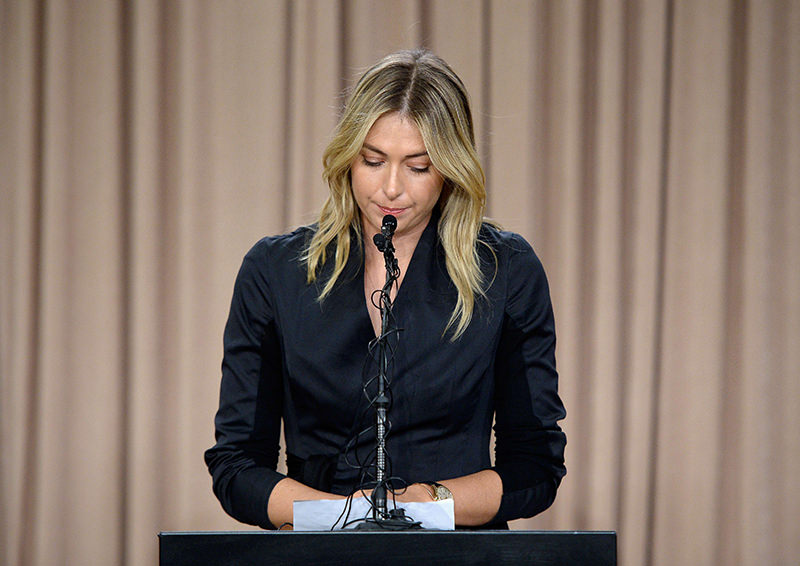 Tennis player Maria Sharapova addresses the media regarding a failed drug test at The LA Hotel Downtown on March 7, 2016 in Los Angeles. (AFP Photo)
by Mar 08, 2016 12:00 am
Swiss watchmaker TAG Heuer cut ties with Maria Sharapova on Tuesday, the latest sponsor after Nike and Porsche to distance itself from the world's highest-paid female athlete following her failed drug test.

The swift response on the heels of Sharapova's announcement on Monday signaled a change in attitude among high-profile corporate backers following a series of doping and corruption scandals in world sports.

"We're now entering a zero tolerance era for sponsors," said Rupert Pratt, co-founder of sports sponsorship agency Generate. "It is now seen as not acceptable to 'stand by your man' because of the amount of scrutiny corporates are now under."

Sharapova's failed drug test at January's Australian Open, one of four annual Grand Slam events, will likely lead to a ban for the 28-year old Russian. The International Tennis Federation's anti-doping program calls for a four-year suspension for a positive test. That ban can be reduced in various circumstances, such as if the player shows no significant fault or negligence.

Loss of sponsor income would be costly for Sharapova, a five-time Grand Slam winner who earned $29.7 million last year, according to Forbes magazine, most of it from endorsements, appearances and royalties rather than victories on court.

Sharapova, who lit up women's tennis when she won Wimbledon in 2004 as a 17-year-old, is still ranked among the top players. She was the world's highest-paid female athlete last year for the 11th consecutive year, and Forbes put her off-court career earnings at more than $200 million.

Fellow athletes had mixed reactions to Sharapova's announcement that she had tested positive for meldonium, a drug she said she had been taking for a decade to treat diabetes and low magnesium.

The substance, recently banned by the World Anti-Doping Agency (WADA), boosts blood flow and can enhance athletic performance. Sharapova, who lives in the United States, is at least the seventh athlete in a month to test positive for meldonium. It is widely available in Eastern Europe but not approved for use in the United States.

"She's ready to take full responsibility and I think that showed a lot of courage and a lot of heart," Serena Williams, the top-ranked player in women's tennis, told reporters at a briefing ahead of a game in New York on Tuesday.

Others were not so sympathetic.

"I'm extremely angry and disappointed. I had to lose my career and never opted to cheat no matter what," tweeted former world No. 1 Jennifer Capriati, in a long series of posts attacking Sharapova.

Aries Merritt, a U.S. hurdler, said there was no excuse for Sharapova to be unaware that WADA added meldonium to its latest list of banned drugs effective Jan. 1, which it circulated to competitors.

"As an athlete it is your responsibility to always know what's being placed on the banned list. Period," said Merritt at the U.S. Olympic Committee summit in Los Angeles.

Sharapova said she had not read an email informing her that meldonium was now banned for use in sport.

She will be provisionally suspended from playing tennis from March 12 and could be prevented from competing for Russia at the Rio de Janeiro Olympics this year.

SOME SPONSORS ON THE FENCE

Sharapova's deal with Tag Heuer, owned by French luxury goods group LVMH, expired at the end of 2015, and the company said on Tuesday it had dropped renewal talks in view of her announcement.

Nike Inc (NKE.N), the world's biggest sportswear brand, and German luxury car maker Porsche, a unit of Volkswagen AG, have said they are suspending their relationship with Sharapova as they gather more information and wait for a decision on a ban.

A person close to Sharapova told Reuters her team was encouraged that none of the sponsors so far have said they were terminating contracts with the player, although they had the right to do so.

"Suspension means to put on hold," the source said, requesting anonymity because of the sensitive nature of the situation. "Under the circumstances we're very pleased that everybody is willing to stand by and see what facts come out instead of terminating."
Danone SA (DANO.PA), the maker of Evian water, a longtime Sharapova sponsor, said on Tuesday it would monitor developments. Avon Products Inc (), another sponsor, declined to comment on its endorsements.

Brian Socolow, an expert in sports law and a partner at Loeb & Loeb LLP, said Nike's quick suspension was no surprise after its long support for now-disgraced U.S. cyclist Lance Armstrong.

But he said Sharapova may yet win back sponsors. "She has the chance, like other athletes, to redeem herself and regain her leadership position as an endorser," said Socolow. "She will have to demonstrate that it was an honest mistake and there are no other improper reasons she took the drug."

There was some scepticism about the sponsors' motives from tennis fans on social media.

Ben Stanley (@BDStanley) tweeted on Tuesday, "Nike is in the business of making money, not offering moral guidance. If it paid to keep Sharapova on, they'd do it."