Murray gets back at Djokovic for Madrid, wins Rome Masters 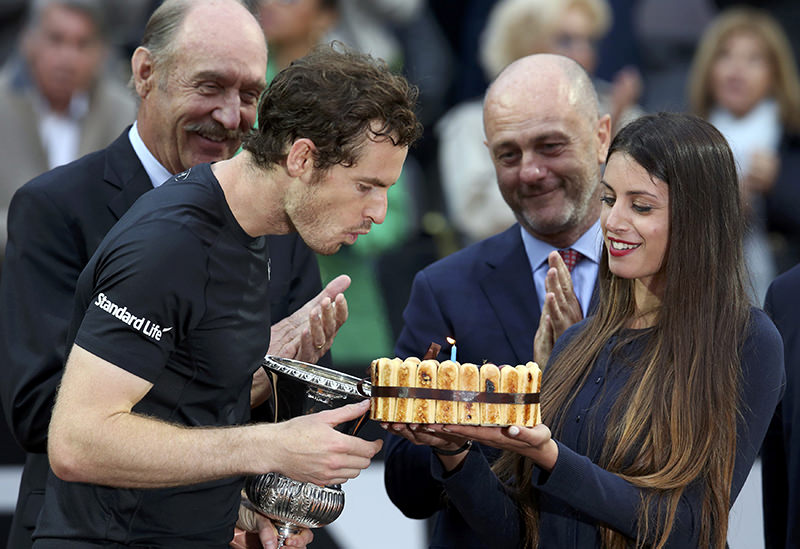 Andy Murray can't remember if he has ever won a match on his birthday, but the British second seed is hoping to make Sunday's celebrations memorable with a maiden Rome Masters title.

The 28-year-old cruised into his maiden final in the Italian capital after sweeping lucky loser Lucas Pouille aside 6-2, 6-1 in a rain-interrupted semi-final on Centre Court on Saturday.

The Scot remains on course to meet world number one Novak Djokovic if he overcomes Japan's Kei Nishikori in their semi-final later on Saturday, a week after the Serbian beat Murray in the Madrid final.

"I haven't won many matches on my birthday before. I don't remember winning any, which isn't a good sign. Hopefully tomorrow that will change."

Djokovic leads their ongoing 32-game ATP rivalry 23-9, and none of Murray's wins have come on the red dirt.

But Murray's clay court game has been progressing this year.

Beating Djokovic will be a tall order, especially after the Serbian buried any doubts over his form in the lead up to the French Open with a convincing quarter-final win over Rafael Nadal on Friday.

Murray suffered defeat to Nadal in the semi-finals of Monte Carlo last month and, although he brushed off suggestions Djokovic is not on top of his game, he is hoping to make his 29th birthday one to remember.

After facing statistically weaker opposition in the shape of Belgian David Goffin in the quarters, then lucky loser Pouille in the semis, Murray will have to step up his game significantly if he is to beat Djokovic for the first time in a clay court final.

The pair's rivalry stretches back more than 10 years, since well before they were fledgling professionals, and they are known to have a strong and friendly relationship off the court.

Djokovic has shown some chinks in his armour in Rome, notably losing a first set 6-0 to Brazilian Tomaz Bellucci on Thursday before turning the match around to cruise into the quarter-finals.

Again, on Friday, the Serbian admitted he struggled at the start of both sets before fighting his way back into the game to beat seven-time Rome champion Nadal 7-5, 7-6 (7/4).

But the numbers speak for themselves, and Murray said: "Maybe he hasn't started some tournaments well. I saw a little bit of yesterday's match, and it was a very good level.

"I think Novak is playing extremely well this year. He's winning and that's a sign of someone who's very confident."

A win would be welcome, but Murray said that simply the prospect of a three-set Masters final with Djokovic can only boost what he believes has been a good preparation for the French Open.

"Any time you play the best players it's great," added Murray.

"The French Open starts in a fortnight and you don't get any better preparation for that than playing the best players in the world.

"My preparation has gone extremely well leading up to Roland Garros."