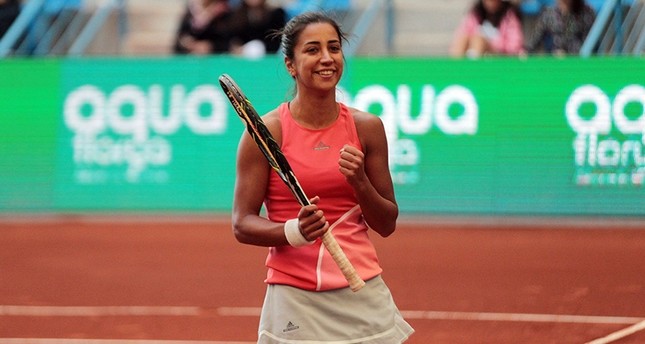 Marsel İlhan, Çağla Büyükakçay and İpek Soylu had a historic day for Turkish tennis with all three qualifying for the main draw of Roland-Garros

Turkish delight was the treat of the day on Court No. 8 as Marsel İlhan, Çağla Büyükakçay and İpek Soylu made it a historic day for the unsung tennis nation at Roland-Garros by all qualifying for the main draw.

After Büyükakçay and Soylu had won their third round qualifying matches to make it into the women's main draw, the Turkish number one İlhan admitted with a smile that he had then felt the pressure to deliver the special "present" for his country.

Yet after two hours and seven minutes of a compelling duel with Argentina's Guido Andreozzi, the 28-year old İlhan held his nerve to prevail 3-6, 6-2, 8-6 and complete an unprecedented day for Turkish tennis.

"It's a great day for us. It was the first time I think that three players got into the main draw," beamed İlhan, who has qualified for his favorite tournament for the third time, where he will face fellow qualifier Gerald Melzer in the first round - a kinder draw than last year when he was paired with the eventual winner Stan Wawrinka.

"I watched Agassi and Kafelnikov when I was young; now to play here, I'm so happy.

"I had a little bit of pressure because the two girls had won before me. I had to win to deliver a present for Turkish tennis. It's a bit of a surprise and I think it will be big news at home.

"I always play well here, I like the clay and the atmosphere here in Paris. It's a great tournament, my childhood tournament, the one I watched so many times when I was young, watching Agassi and Kafelnikov, and now to play here I'm so happy."

Second-seed Büyükakçay, who won her first WTA title at her home Istanbul tournament last month, was the most emphatic winner, defeating Czech Klara Koukalova 6-1, 6-3, before Soylu proved a far less likely victor, having to overcome Ukrainian Kateryna Kozlova 6-3, 7-6(2) who's ranked 64 places ahead of her.

The three Turkish triumphs meant that they had enjoyed more success than even the U.S. on the final day of qualifying. The Americans had five players in the third round but only their in-form number one seed Louisa Chirico, who beat Russian Irina Khromacheva 6-3, 6-1 - looking as if she could pose a real threat to anyone in the main draw - and Sachia Vickery, 6-0, 6-1 winner over France's Fiona Ferro, made it through.

Jared Donaldson was defeated 4-6, 7-5, 6-2 by Georgian Nikoloz Basilashvili while Jennifer Brady lost 7-6(2), 6-4 to Daniela Hantuchova and Grace Min was beaten 6-7(4), 6-1, 11-9 in a draining contest with Lucie Hradecka, who became the third Czech player to qualify after Radek Stepanek and Katerina Siniakova earlier in the afternoon.
RELATED TOPICS