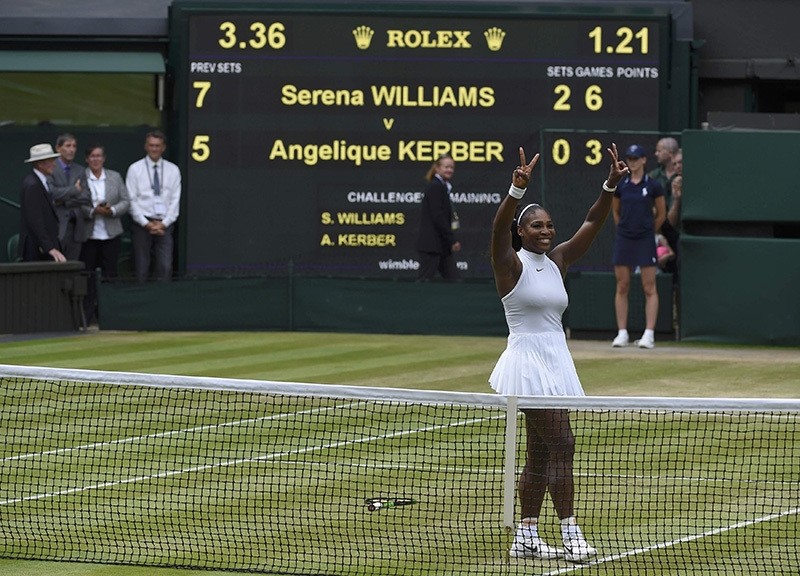 Serena Williams powered to her seventh Wimbledon crown as the world number one finally claimed a record-equalling 22nd major title with a 7-5, 6-3 victory over Angelique Kerber in Saturday's final.

Williams had been stuck on 21 Grand Slams since winning last year's Wimbledon, but the American star ended that frustrating barren spell to retain the title and draw level with Steffi Graf's Open era record.

Serena was pushed hard by Kerber in a high-quality clash lasting 81 minutes on Centre Court, but the German fourth seed eventually crumbled under a barrage of 39 winners and 13 aces from the defending champion.

"It's a great feeling to be here. Angelique brings out great tennis in me," said Serena.

Kerber said the American was a great champion.

"Serena you deserve it, you are a great champion and great person. We played a great match," said Kerber.

"It's an honour to play on Centre Court and a great feeling."

Having avenged her shock loss against Kerber in the Australian Open final in January, Williams was wreathed in smiles as she paraded the Venus Rosewater Dish around Centre Court after collecting a cheque for £2 million ($2.5 million, 2.3 million euros).

But the far more significant reward is the knowledge she has reestablished her supremacy at a time when doubters were beginning to question the 34-year-old's hunger for more silverware after consecutive Slam final defeats this year.

In a testament to her remarkable longevity as the sport's preeminent force, Serena is once again Wimbledon's queen 14 years after her first success at the All England Club.

Showing signs of cracking under the pressure of her bid for tennis immortality, Williams had cut a grumpy figure for much of the tournament, earning a fine for racquet smashing and threatening to sue Wimbledon officials if she was injured on a wet court.

But a serene focus came over Williams with the trophy in sight and she delivered a 48-minute masterclass against Elena Vesnina in the quickest semi-final in Wimbledon history.

With pop royalty Beyonce and Jay-Z among Serena's entourage in the players' box, Williams finally hit the right notes after so many recent disappointments.

In her ninth Wimbledon final and 28th at the majors, Williams had a golden opportunity to seize the initiative in Kerber's first service game, but the German showed her mettle as she nervelessly saved three break points.

Given Williams' pursuit of Graf's historic landmark, it was a delicious twist that the 47-year-old had played a role in Kerber's recent rise after advising her compatriot.

Showing she has heeded Graf's words of wisdom, Kerber had sprinted to the final without dropping a set in her six matches and she matched Serena blow for blow in a tense first set.

Kerber, in her first Wimbledon final and second major title match, was moving Williams into awkward positions with her left-handed ground-strokes.

But Serena kept slugging away and the barrage eventually proved too much for the 28-year-old to resist.

A sequence of blistering ground-strokes rocked the German deep behind the baseline on set point, forcing a fatal error that Serena celebrated with a defiant shriek and a prolonged double-fist pump.

Kerber was still competing gamely in the second set, but when she finally earned a first break point in the seventh game, Williams got out of trouble with a pair of imperious aces.

The German's look of resignation suggested the end was in sight and so it proved as Serena broke in the next game.

Serena's coach Patrick Mouratoglou says she enjoys her major triumphs for little more than five minutes before switching her attention to the next target.

But judging by the joyous way Williams slumped flat on her back on Centre Court when Kerber miscued on match point, the sweet taste of this historic success might linger a little longer.