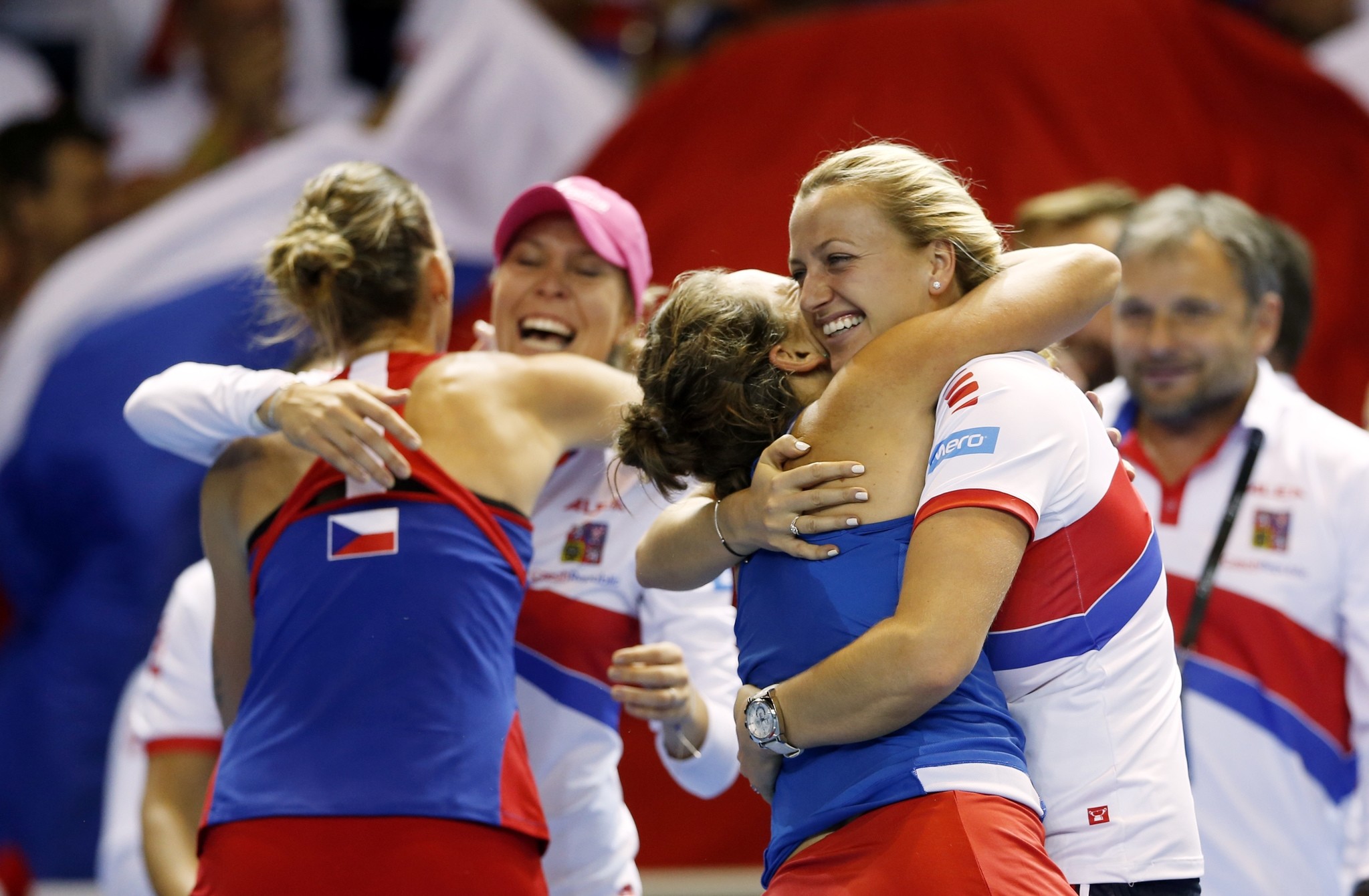 Czech Republic's players celebrate their victory over France during the Fed Cup final in Strasbourg, eastern France, Sunday, Nov. 13, 2016. (AP Photo)
by Nov 13, 2016 12:00 am
The Czech Republic were too hot to handle in the doubles as they claimed a 3-2 comeback win against hosts France to win their fifth Fed Cup title in six years on Sunday and 10th overall.

Karolina Pliskova and Barbora Strycova downed Kristina Mladenovic and Caroline Garcia 7-5 7-5 in the doubles to hand the visitors the decisive point.

The nation won five titles as Czechoslovakia in the 1970s and 80s before dominating the women's team competition in recent years.

Against the pair who won this year's French Open, Strycova and Pliskova returned well and made the most of Mladenovic's below-par performance to hand the Czech Republic victory.

Petr Pala helped his side recover from a 2-1 deficit to become the first captain to win five Fed Cup titles.

Pliskova had put the visitors ahead on Saturday with an epic 6-3 4-6 16-14 win against Mladenovic after a nail-biting third set, the longest ever played in a Fed Cup final.

After a minute of applause in memory of the 130 who were killed in the Paris attacks one year ago, Garcia followed up with a 6-3 3-6 6-3 win against Pliskova.

Both captains kept their cards close to their chest with a possible doubles decider looming, and instead of the scheduled Mladenovic v Kvitova reverse singles, Cornet and Strycova were sent to the Rhenus Sport arena's hardcourt.

The Frenchwoman was no match for the world number 20 and despite opening a 4-1 lead in the second set, she lost 6-2 7-6(4) before the doubles went the Czech Republic's way.

The Czech got the decisive break of serve in the 11th game when Mladenovic netted Pliskova's return and the visitors served it out to move a set up.

They struggled on serve early on in the second, saving four break points in their first two service games, only for them to break for 3-2 when Mladenovic netted a volley.

The French levelled for 4-4 but cracked again in the 11th game, won by the Czech thanks to a splendid drop volley by Pliskova.

The U.S. Open finalist completed victory with a volley on their second match point.