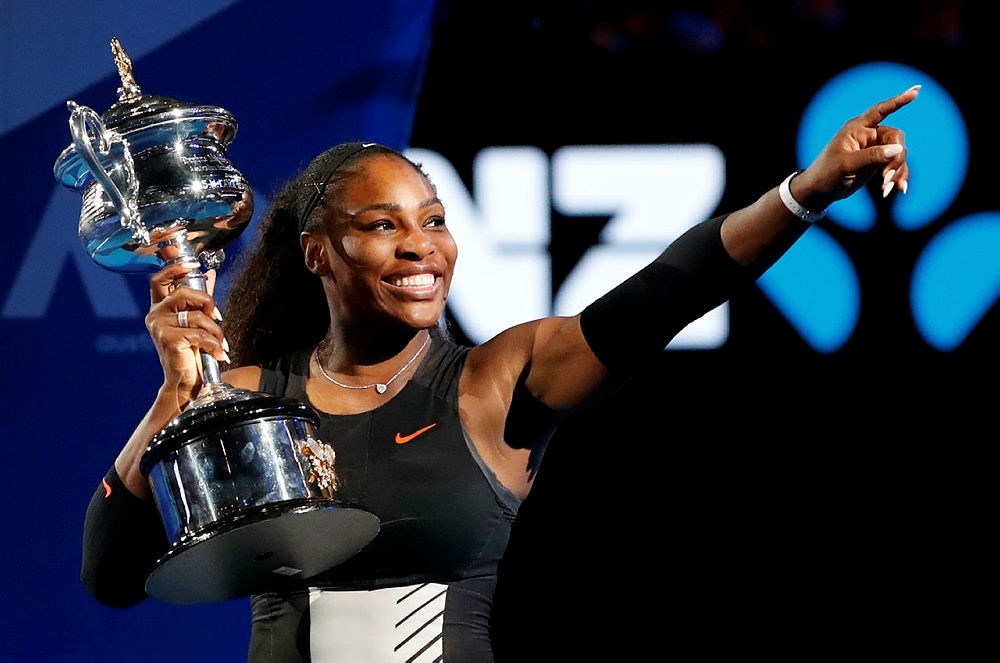 Williams holds her trophy after defeating her sister Venus during the women's singles final at the Australian Open tennis championships in Melbourne, Australia. (AP Photo)
by Associated Press
Jan 05, 2018 12:00 am

Serena Williams' decision not to defend her Australian Open title four months after giving birth to her first child had nothing to do with merely being able to play at Melbourne Park.

The seven-time Australian Open champion confirmed Friday she wouldn't attempt to defend the title she won here last year, saying she wasn't convinced she could win it.

Williams played in an exhibition tournament last weekend in Abu Dhabi to test her match condition, and indicated after her loss to French Open champion Jelena Ostapenko that she might not travel to Melbourne.

"After competing in Abu Dhabi I realized that although I am super close, I'm not where I personally want to be," Williams said in a statement Friday. "My coach and team always said 'Only go to tournaments when you are prepared to go all the way.' I can compete - but I don't want to just compete, I want to do far better than that and to do so, I will need a little more time.

"With that being said, and even though I am disappointed about it, I've decided not to compete in the Australian Open this year."

Williams was pregnant when she won at Melbourne Park last year, her Open-era record 23rd Grand Slam singles title. She gave birth to her daughter, Alexis Olympia, in September.

Williams didn't drop a set while winning last year's title, and her victory helped her regain the world No.1 ranking.

The 36-year-old Williams needs only one more major title to equal the all-time record held by Margaret Court, who won 13 of her 24 Grand Slam titles before the Open era began in 1968.

Three women have returned after having babies to win Grand Slam singles titles in the Open era, including Court and fellow Australian Evonne Goolagong Cawley, who won the 1977 Australian Open seven months after giving birth to daughter, Kelly, and added her second Wimbledon title in 1980.

Kim Clijsters returned from retirement after having a daughter, Jada Elle, in February 2008, and won the 2009 U.S. Open in her third tournament back.

Williams' withdrawal came less than 24 hours after fellow former world No. 1 Andy Murray withdrew from the men's event with a chronic hip injury.

Williams last year beat older sister Venus in the final. In terms of total years, it was the oldest Grand Slam women's final in the Open era —Williams sisters combining for 71 years, 11 months.

Venus has returned and is playing in Sydney next week to prepare for the Australian Open, which begins Jan. 15.

Serena will sit one out, but is promising to return in future.

"The memory of last year's Open is one that I will carry with me, and Olympia and I look forward to coming back again," she said. "I appreciate the support and understanding of my fans and everyone at the Australian Open."

Tournament director Craig Tiley said Serena Williams waited as long as she could before letting organizers know she wouldn't be able to compete.

"I've been in constant contact with Serena and her team and know this is why she has pushed it and pushed it until the 11th hour to make her final decision," he said. Organizers later announced that French Open semifinalist Timea Bacsinszky had also withdrawn after failing to recover in time following surgery on her right hand in September.

With Serena Williams out, the women's singles title at Melbourne appears to be wide open. No. 1-ranked Simona Halep and No. 3 Caroline Wozniacki are bidding to win their first Grand Slam singles titles.

Also in the mix will be No. 2-ranked Garbine Muguruza, last year's Wimbledon winner, U.S. Open champion Sloane Stevens and Venus Williams, who will be aiming to win her eighth major singles title at the age of 37.