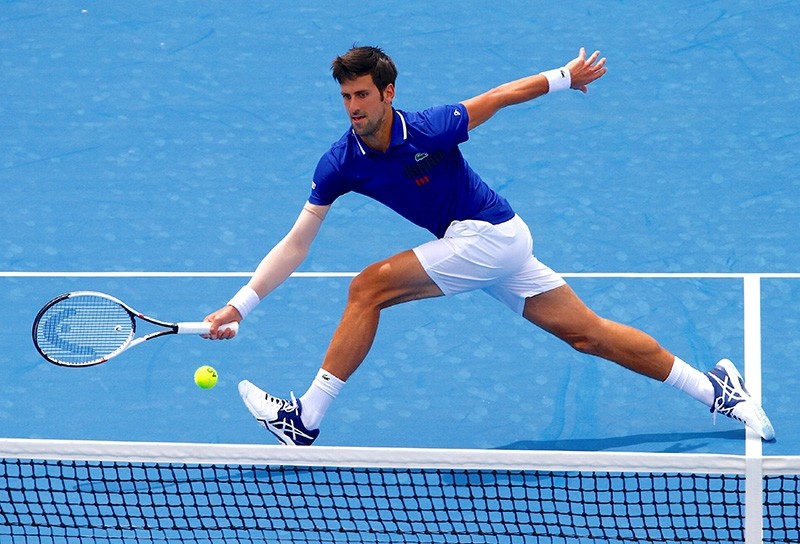 Serbia's Novak Djokovic stretches for a shot during his match against Austria's Dominic Thiem at the Kooyong Classic in Melbourne, Australia, Jan. 10, 2018. (Reuters Photo)
by Compiled from Wire Services Jan 10, 2018 12:00 am

Novak Djokovic made a resounding return on Wednesday after six months out with an elbow injury, declaring he felt "great" after beating world number five Dominic Thiem 6-1, 6-4 at the Kooyong Classic.

The Serbian 12-time Grand Slam winner was in good form, and full of optimism, after his first competitive outing since losing a Wimbledon quarter-final to Tomas Berdych last July.

"I feel great, I was eager to get onto the court," he said after playing with a flesh-colored sleeve on his right arm.

"I had a great opponent, it was a test for me to see where I am, how the work we did pays off on court. It worked pretty well."

The former world number one, who will be chasing a record seventh Australian Open crown next week, had pulled out of a warm-up Abu Dhabi tournament, raising concerns over whether he would be fit enough to play at Melbourne Park.

"There was a doubt, especially after I pulled out of the first week of the year," he admitted.

"I personally didn't know what's going to happen. We did some treatment and obviously gave it a lot of thought. Luckily for me I'm here and so I'm hoping in the next four, five days everything will go well and I'll be ready for the Open."

While pleased at his progress, Djokovic, who has dropped to 14 in the world, admitted he still had work to do ahead of the opening Grand Slam of the year.

"I don't want to be overconfident, but I'm very, very happy with how it went today," added the 30-year-old.

"I don't say I'm at 100 percent, I can only say that when I get the feel of a tournament. Ideally I would have had another tournament before the start of the Open, but it was not meant to be.

"I'll take whatever I can -- one or two matches here will be good preparation."

Djokovic displayed few signs of rust after his lengthy time away from the game, hitting penetrating groundstrokes deep into the corners, moving extremely well and volleying with precision.

He also unveiled a more compact service motion intended to put less pressure on his elbow that resulted in three aces in a single game against Thiem in the first set.

Perhaps the biggest change was his more relaxed mood on the court — a major contrast to his demeanor during his recent slump from late 2016 to mid-2017 when struggled in the majors and lost his No. 1 ranking.

Freshly confident, Djokovic will now head to Melbourne Park with the aim of replicating Roger Federer's feat at last year's Australian Open, when the Swiss star returned from his own six-month injury layoff and surprisingly won the title.

"Luckily for me, I'm here," Djokovic said. "So glad to be back and so nice to start in a country and a city where I have the greatest memories."