Women's No.1 Halep advances in Australian Open in record long match despite injury 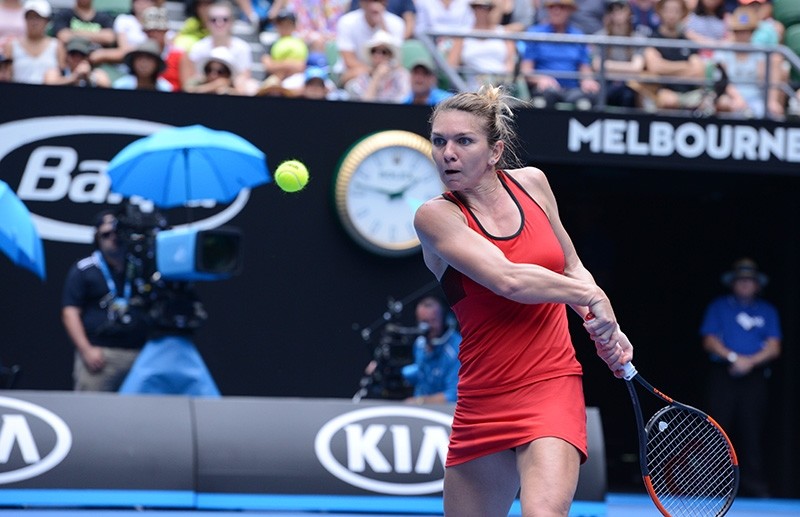 After wasting three chances to serve it out, then saving three match points, Simona Halep finally finished off American Lauren Davis in a third-round win that took 3 hours, 45 minutes and equaled a record at the Australian Open.

For top-ranked Halep, already playing with an injured left ankle, the 4-6, 6-4, 15-13 victory on Saturday was a testament to her renewed self-belief.

The third set took 2 hours, 22 minutes and momentum swung, with 11 service breaks and two medical timeouts — for Davis to get treatment for toes on both feet — before Halep converted on her first match point.

Halep had chances to serve for the match in the ninith, 11th and 15th games of the third set but was broken each time by the No. 76-ranked Davis, who then blew three match points from 0-40 on Halep's serve in the 22nd game.

"Definitely was a very tough match, so long," said Halep, who has twice reached the final at the French Open but never won a Grand Slam singles title. "I never played the third set so long, so I'm really happy I could stay and win it. I'm almost dead."

It equaled the longest women's singles match at the Australian Open in terms of games played: Chanda Rubin's win over Arantxa Shanchez Vicario in 1996 was also 48 games. In terms of duration, it was almost an hour shorter than the record 4:44 that Francesca Schiavone needed to beat Svetlana Kuznetsova in 2011.

"I just feel that my muscles are gone," said Halep, who badly twisted her left ankle in the first round. "My ankle is, I don't know how it is because I don't feel it anymore! But ... it was nice to win this match."

Hyeon Chung ensured the subsequent match on Rod Laver Arena went the distance, too, as he took out another Zverev. Chung beat fourth-seeded Alexander Zverev 5-7, 7-6 (3), 2-6, 6-3, 6-0 six days after a win over No. 32 Mischa Zverev in the first round.

The two long matches on Day 6 meant a move for local hope Ash Barty's scheduled center court appearance and it cost the tournament's No. 18 seed, who lost 6-4, 6-2 to Naomi Osaka on Margaret Court Arena.

For Halep, the tussle against Davis was evidence of her maturing as a top 10 player.

"I was down love-40. She had three match balls. It was not easy, but I just kept playing. I just kept believing that it's not over," said Halep, who had back-to-back first-round exits on her previous two trips to Melbourne Park. "For sure I'm stronger mentally, and I could resist like for every moment in the match. The big win is that I could handle it."

Davis lost the three previous times she'd played in the third round of a major, but did everything possible to stay in the match, keeping long rallies alive to put pressure on Halep.

The 24-year-old American finished with roughly twice the number of winners (52 to 27) against slightly more than double the unforced errors (73-39), and broke Halep's serve six times.

"We were both fighting our hearts out. Every point was super long," Davis said. "I got to the point where I was so tired, I just told myself to swing and move. I didn't feel any pressure."

Halep will play the winner of the later match between local hope Ashleigh Barty and Naomi Osaka.

Sixth-seeded Karolina Pliskova had 11 aces and beat No. 29 Lucie Safarova 7-6 (6), 7-5 in a match featuring just one service break.

The 17th-seeded Keys missed last year's Australian Open after undergoing surgery to repair her injured left wrist, and played only one match after losing the U.S. Open final to Sloane Stephens before shutting down her season early. It's helped her start the new season feeling mentally fresh.

"As amazing as that run was, the combination of being exhausted from that and having a wrist that still wasn't 100 percent perfect, I just needed to kind of shut it down, calm down," she said. "And then I was really excited to start the new season."

Elsewhere on the men's side, fifth-seeded Dominic Thiem beat Adrian Mannarino 6-4, 6-2, 7-5 to move into the fourth round for a sixth consecutive major. Thiem next faces Tennys Sandgren, who continued his career-best run by beating Maximilian Marterer 5-7, 6-3, 7-5, 7-6 (5) to reach the fourth round.