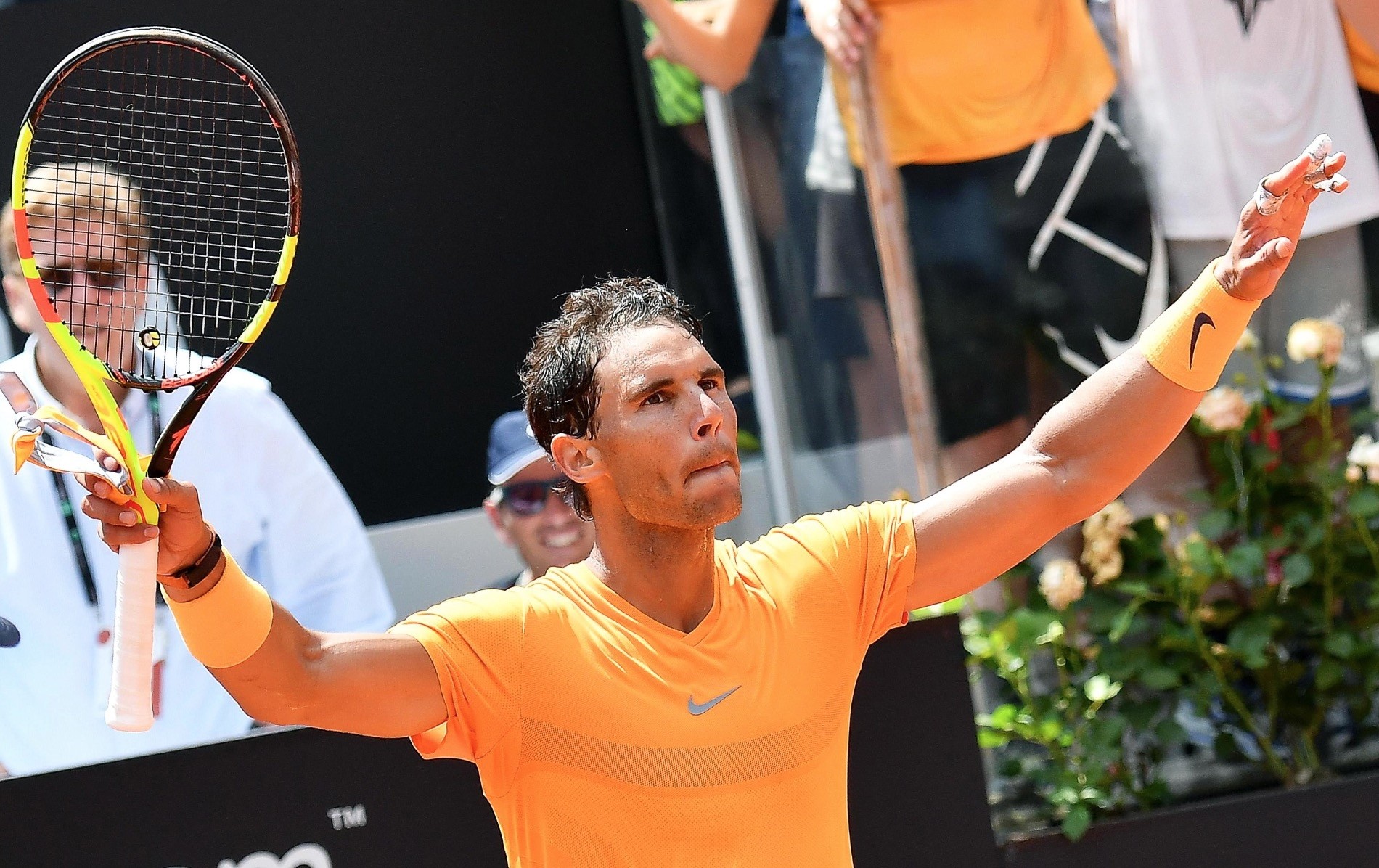 The crowd at the Foro Italico was decidedly behind Fognini, Italy's top player, and Nadal was under pressure when Fognini won five straight games to cancel out a 4-1 deficit and win the opening set. "He played aggressive, a great level of tennis, creating a lot of winners and taking balls earlier," Nadal said. "I felt the pressure a little bit and played a couple of bad games." But Fognini couldn't keep up with Nadal's consistency and heavy topspin on the red clay court and eventually was physically worn down. "I tried to play more with my forehand and when I play aggressive with my forehand the backhand becomes better," Nadal said. "It's important to be able to change the tactics of the match."

Fognini had tape applied under his left knee while trailing 3-2 in the third set due to a physical problem that has bothered him for weeks. "The first set lasted more than an hour," Fognini said. "It's him that causes the problem."

For a spot in the final, Nadal will play four-time Rome champion Novak Djokovic or Kei Nishikori. Nadal can replace idle Roger Federer at No. 1 if he lifts the Rome trophy for the first time since 2013. Federer is sitting out the clay season to prepare for Wimbledon. In the other half of the draw, Australian Open finalist Marin Cilic beat 10th-seeded Pablo Carreno Busta 6-3, 6-3. The Croatian's next opponent will be defending champion Alexander Zverev or ninth-seeded David Goffin. Cilic didn't face a single break point. "That was extremely important as Pablo is an amazing player from the back of the court," Cilic said. "It allowed me to take some extra chances."

In the women's quarterfinals, defending champion Elina Svitolina defeated Angelique Kerber 6-4, 6-4 for her sixth straight victory over the former No. 1 player. "I had to really step up and play really aggressive in important moments and that's what was the key," Svitolina said. "I'm playing good tennis. I'm happy the way I'm handling the pressure so far." Svitolina will next face Caroline Wozniacki or Anett Kontaveit.

Nadal struggled with his backhand early on, resulting in cheers from the crowd upon each miss, and Fognini hit a number of winners on the lines. "I knew I had game to put him in difficulty and I pushed him to the limit," Fognini said. "But he's also a player who pushes you to the limit."

Nadal hit only 16 winners to Fognini's 29 but committed less than half as many unforced errors - 19 tp 39. "It's not like I was facing my grandfather," Fognini said of when Nadal blasted a passing shot by him early in the second set. "Rafa is Rafa."

While the result meant it was now 42 years since an Italian man last won the tournament - Adriano Panatta in 1976 - Fognini was still applauded as he walked off of the court. Even Nadal joined in the applause for Fognini, pausing to clap.

Nadal later thanked the fans on Twitter: "Great crowds today playing the local hero. Many thanks Rome for an amazing sportsmanship and respect for both."