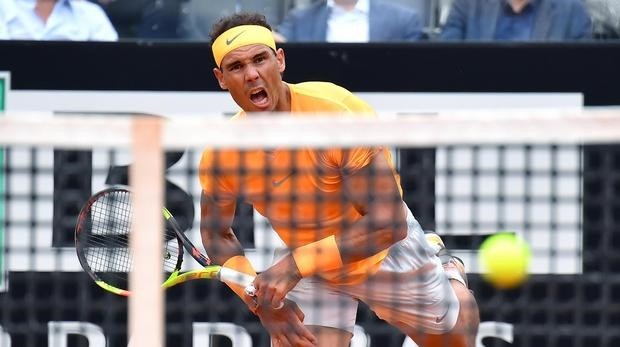 Rafael Nadal reclaimed his world number one status with a phenomenal performance against Alexander Zverev to win his eighth Italian Open title in Rome on Sunday.

The resilient 16-times Grand Slam champion battled back to claim a 6-1, 1-6, 6-3 victory for his fifth win over Zverev to remain unbeaten against the 21-year-old, who won the Rome event last year.

Nadal's victory means it is the sixth time he has earned the number one spot as he overtakes Roger Federer, who announced in March he would skip the clay season after a shock defeat at the Miami Open.

The Spanish clay court king will now look to win his 11th French Open title at Roland Garros, which begins May 27, to ensure he begins the grass tournament term in a strong position.

In the women's event, Elina Svitolina retained her Italian Open title as the Ukrainian world number four collected her third title of 2018 with a 6-0, 6-4 victory in 67 minutes with a commanding and confident performance over a dismayed Simona Halep.

"It's amazing that I could come and defend my title here," Svitolina said. "It's really something very, very special for me."

Zverev, who was competing in his third consecutive final after wins in Munich and Madrid, stepped forward with acute aggression to break in the first game but Nadal rallied back to gain a 4-1 advantage.

The German world number three was limited to just 11 points in the first set but he flipped the script in the second to break Nadal's serve twice and evened the scores with a spiteful backhand down the line.

Zverev looped a high forehand past Nadal on his way to another break as the pressure was poured on to the Spaniard with Zverev leading the decider 3-1 before rain suspended play.

The short interval was a saving grace for Nadal as he moved ahead with two determined breaks before sealing another resounding win in Rome.

In a rematch of the 2017 final in the women's contest, where Svitolina lost the first set but stormed back for a 4-6, 7-5, 6-1 victory, this year's edition was very one-sided.

Svitolina, who lifted titles in Brisbane and Dubai in January and February respectively, raced ahead collecting 16 of the first 22 points for an astonishing 4-0 head start against the world number one.

Halep's confidence was shot and her ground strokes were flat as Svitolina wrapped up a whitewash first set in 19 minutes.

Svitolina produced a fierce forehand after a lengthy rally to set up another break of serve, which was ecstatically celebrated by the 23-year-old, with Halep completely distraught.

"I hope that next year, I am in the final again and I hope that will be the lucky one," said Halep.

Halep complained of some discomfort as she called for the physiotherapist and opted for a medical timeout.

"I was a little bit too stiff with my body and I couldn't stay in the rallies," Halep said. "The muscles were stiff. I couldn't run."

Her attitude improved slightly after she returned but there was no signs of a drastic turnaround as Svitolina reclaimed her Italian Open crown.