Venus wins at US Open, could meet Serena in 3rd round 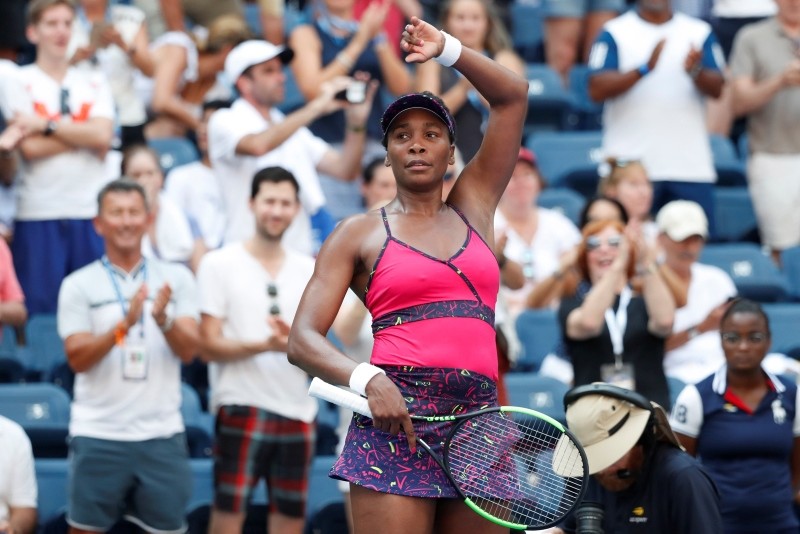 Venus Williams of the United States waves to the crowd in the second round on day three of the 2018 U.S. Open tennis tournament at USTA Billie Jean King National Tennis Center. (Reuters Photo)
by Associated Press Aug 29, 2018 12:00 am

Venus Williams did her part to set up an earlier-than-usual Grand Slam matchup with sister Serena at the U.S. Open, beating Camila Giorgi 6-4, 7-5 on Wednesday.

Serena was scheduled to play at night, when a victory would have the Williams sisters meeting in the third round, earlier than they have in a Grand Slam in 20 years.

Defending champion Sloane Stephens and two-time U.S. Open finalist Victoria Azarenka will also meet in the third round after victories on another hot and humid day at the final Grand Slam tournament of the year, where winning wasn't enough.

Winning quickly and getting back indoors was on everyone's mind.

"Yeah, I'm very happy about that," Azarenka said after overpowering No. 25 seed Daria Gavrilova of Australia 6-1, 6-2.

Venus Williams was spared some of the most direct sun by playing in the rebuilt Louis Armstrong Stadium, which is well-shaded. But there was only so much protection available on a day when temperatures soared into the mid-90s for the second straight day.

"Maybe the hottest conditions I have every played (in)," No. 20 seed Borna Coric said after winning his second-round match in straight sets.

An extreme heat rule was to remain in effect until further notice, allowing men to take a 10-minute break between the third and fourth set of singles matches, and women to do so between their second and third sets.

Serena, at No. 17 seeded one spot below her older sister, should face cooler conditions during a night match against Carina Witthoeft.

If she wins, the showdown with Venus would be the earliest between the Williams sisters at a Grand Slam tournament since they played in the second round of the 1998 Australian Open in their very first meeting on tour.

Stephens was in trouble early before rallying to beat Ukrainian qualifier Anhelina Kalinina 4-6, 7-5, 6-2.

Other seeded winners on the women's side included No. 8 Elina Svitolina, No. 15 Elise Mertens, No. 19 Anastasija Sevastova and No. 23 Barbora Strycova, all in straight sets.

"Especially with the heat, I wanted to make the match a little shorter," Mertens said.

Stan Wawrinka ran his U.S. Open winning streak to nine, and the 2016 champion will next meet No. 25 seed Milos Raonic. But No. 15 seed Stefanos Tsitsipas was eliminated in the second round, a surprisingly early exit after his strong hard-court season.

Past U.S. Open champions Rafael Nadal, Juan Martin del Potro and Andy Murray were all in action later Wednesday — with 2009 winner del Potro and 2012 winner Murray to meet in the third round with victories.