Federer knocked out of Australian Open by Greece's Tsitsipas 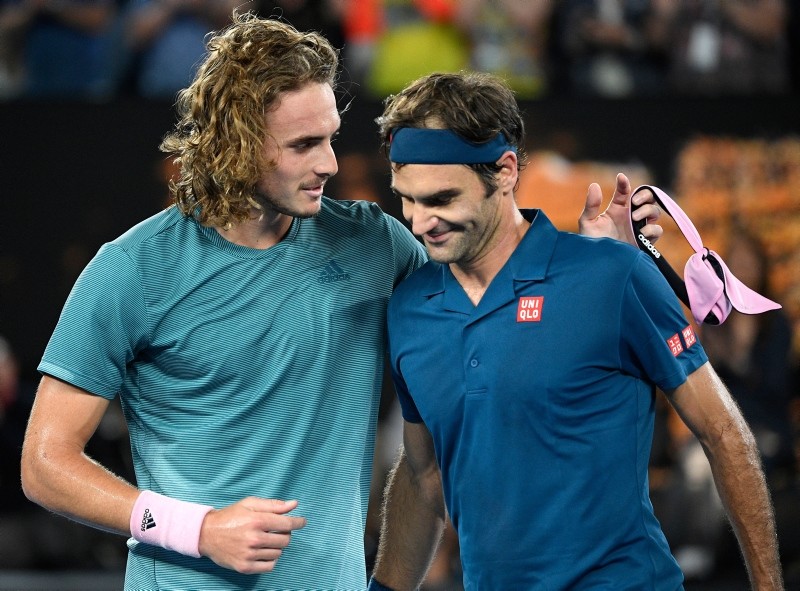 Greece's Stefanos Tsitsipas, left, is congratulated by Switzerland's Roger Federer after winning their fourth round match at the Australian Open tennis championships in Melbourne, Australia, Sunday, Jan. 20, 2019. (AP Photo)
by Jan 20, 2019 12:00 am

Roger Federer's bid for a hat-trick of Australian Open titles was crushed on Sunday as Greek wunderkind Stefanos Tsitsipas rose up to floor the Swiss master and become his nation's first Grand Slam quarter-finalist.

In a match pitting the oldest and youngest players left in the men's draw, the 20-year-old Tsitsipas overhauled Federer 6-7(11) 7-6(3) 7-5 7-6(5) under the lights of Rod Laver Arena, sparking delirium among Greek fans out in force at Melbourne Park.

The 37-year-old Federer, 20 times a Grand Slam champion, will rue his chances, having failed to convert any of the 12 break points he took from Tsitsipas over the course of a riveting clash laden with sparkling shot-making.

Instead, it was Tsitsipas showing a wise head on young shoulders in a final tiebreak of unrelenting tension.

When given a match point after Federer slapped a forehand long, he converted it clinically, forcing a backhand error from the Swiss to announce himself on one of the game's biggest stages.

He raised his arms in triumph and roared at the terraces, bringing tears of joy to his brother's eyes in the players' box.

"There's nothing I can describe, I cannot describe it, I am the happiest man on earth right now," Tsitsipas said in his courtside interview.

"Roger is a legend of our sport, he showed such good tennis over the years. I have been idolising him since I was six.

Tsitsipas will play 22nd-seeded Spaniard Roberto Bautista Agut for a place in the semi-finals.