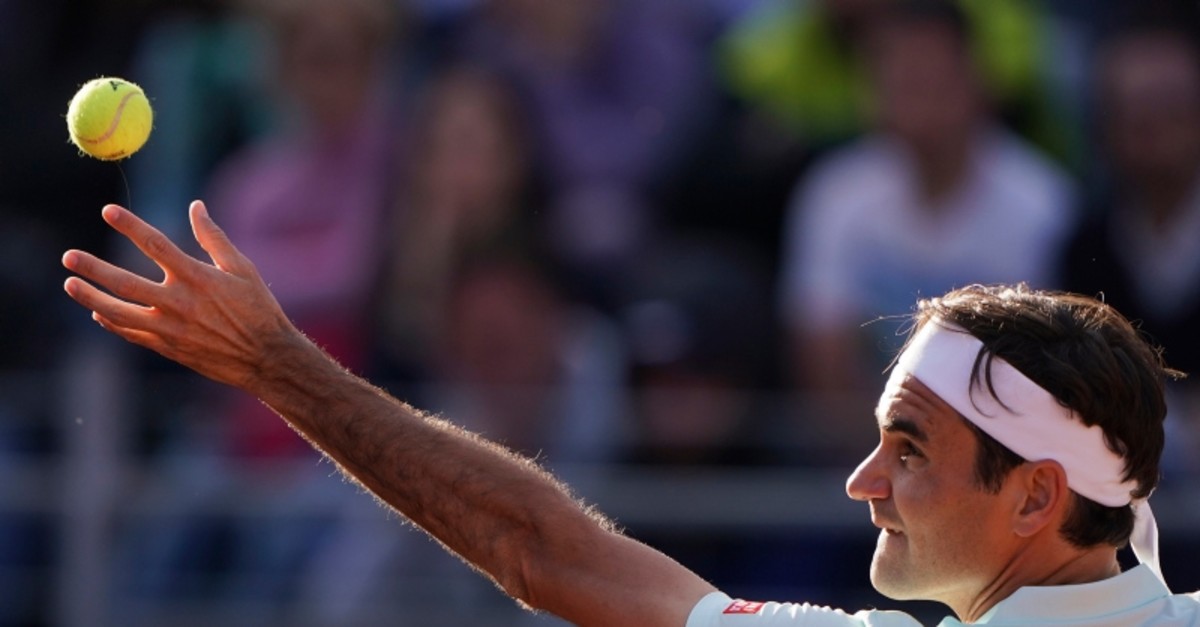 Roger Federer of Switzerland serves the ball to Borna Cedric of Croatia at the Italian Open tennis tournament, in Rome, Thursday, May 16, 2019. (AP Photo)
by French Press Agency - AFP
May 17, 2019 1:40 am

Roger Federer saved two match points against Borna Coric to advance to the quarter-finals of the Italian Open on Thursday as defending champion Rafael Nadal and top seed Novak Djokovic raced through in straight sets.

However, Australian firebrand Nick Kyrgios was disqualified after a foul-mouthed rant during his third-round match against Norway's Casper Ruud which could land him with a lengthy suspension.

Federer, a four-time finalist in Rome, trailed 0-4 before dropping the first set, coming back in the second and saving two match points in the third set tie-break.

"Definitely felt like I got a little lucky obviously," said Federer.

"Borna had the lead. There were crucial moments throughout the match, second set and third set, for me to stay in it. Things definitely went my way tonight."

Tsitsipas shocked Federer in the fourth round at the Australian Open in January.

"I have been improving every week," said Nadal, who next plays fellow Spaniard Fernando Verdasco as he targets a first title on clay this season before his French Open defence.

"It's been a peculiar clay court season for me. I had some tough period of time. Has been little bit difficult to hold the body and the tennis level for every day."

The four-time Italian Open winner next plays Argentine seventh seed Juan Martin Del Potro for a place in the semi-finals.

"I like the fact that I didn't play yesterday because I felt like I needed an extra maybe day of rest and recovery a little bit," said the Serb. "So it was perfect."

In the women's event, Japan's Naomi Osaka, the top seed, also won twice to retain the world number one ranking ahead of the start of the French Open.

She eased into the last eight with a 6-3, 6-3 win over Mihaela Buzarnescu after earlier beating Slovak Dominika Cibulkova by the same scoreline.

Osaka was at risk of losing her world number one ranking to Simona Halep but the Romanian was knocked out by Czech teenager Marketa Vondrousova losing 2-6, 7-5, 6-3.

Kyrgios's tournament finished early after he threw a chair across court in a tantrum, before storming off and being disqualified.

The controversial 24-year-old, who had marked his presence in Rome by criticising Djokovic and Nadal in an interview on Wednesday, started arguing with the umpire in the third set.

World number 36 Kyrgios had levelled the match at one set all but was given a game penalty early on in the third set for swearing.

His response was to kick out at a water bottle before throwing a chair onto the court, packing his bag and then storming off court, shouting 'I am fucking done''

Kyrgios was automatically disqualified with Ruud winning 6-3, 6-7 (5/7), 2-1 to advance to the third round before losing to del Potro.

"I think he got what he deserved," said Ruud of Kyrgios who was then fined 20,000 euros and made to forfeit his tournament winnings.

Kyrgios had already been at the centre of controversy during Wednesday's washout when he told the NCR Tennis Podcast that Djokovic had "a sick obsession with wanting to be liked".

Nadal was described by the Australian as "super-salty".

Fifth seed Dominic Thiem slammed tournament organisers after he was dumped out 4-6, 6-4, 7-5 by Verdasco.

"I really dislike how we players get treated at this tournament because yesterday was, in my opinion, not acceptable," said last year's French Open runner-up.

"I'm quite pissed about it. I was tired, exhausted, today because of all these shitty things," he added.

Japan's Kei Nishikori, the sixth seed, got past American Taylor Fritz 6-2, 6-4 and then Jan-Lennard Struff of Germany in three sets.

Czech second seed Petra Kvitova retired in her third round match against Greece's Maria Sakkari while trailing 7-5, 5-7, 4-0 in the third set.