'I wanted to hit him square in the chest': Kyrgios admits he was aiming at the Spaniard at Wimbledon 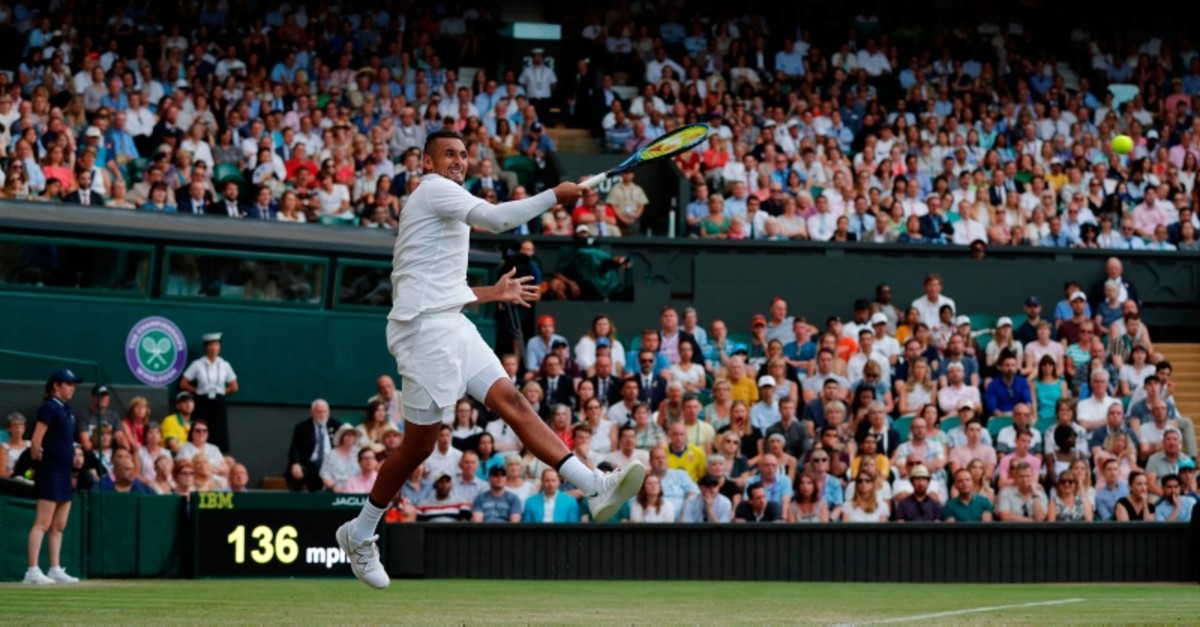 Australia's Nick Kyrgios returns against Spain's Rafael Nadal during their men's singles second round match on the fourth day of the 2019 Wimbledon Championships at The All England Lawn Tennis Club in Wimbledon, on July 4, 2019. (AFP Photo)
by Jul 05, 2019 12:04 pm

Nick Kyrgios admitted he meant to spear a forehand directly at Rafael Nadal in their bad-tempered Wimbledon clash on Thursday.

Nadal triumphed 6-3, 3-6, 7-6 (7/5), 7-6 (7/3) in a second round Centre Court duel which saw the combustible Australian pick up a code violation for unsportsmanlike behavior and wage a bitter war of words with umpire Damien Dumusois.

He called the official a "disgrace", describing his handling of the explosive tie as "pathetic" for failing to warn the Spaniard over what he claimed was his pedestrian pace of play.

The two players faced down each other in the eighth game of the third set when Nadal had to take evasive action with his racket to fend off a blistering forehand aimed straight at him by the Australian.

"I was going for him. Yeah, I wanted to hit him square in the chest. Like, he's got decent hands," said 24-year-old Kyrgios.

"Why would I apologize? I mean, the dude has got how many slams, how much money in the bank account?

"I think he can take a ball to the chest, bro. I'm not going to apologize to him at all."

Nadal said he was unconcerned for his own safety when the ball came towards him at high speed but feared for others if the ball had gone astray.

"I know when you hit this kind of ball, the ball can go anywhere. This time the ball went in, almost hit me, no problem.

"I am a professional, so I know how to avoid this. But another one, the ball goes straight to the back. That ball hits an eye or something like this, it is a problem."

Kyrgios, who famously announced himself to the tennis world when he defeated Nadal at Wimbledon in 2014 as a wild card ranked at 144, spent the eve of Thursday's match in a local bar.

It was a decision he did not regret.

"You look way too excited to ask that question. You must have a really boring life," he chastised a reporter.

Nadal had suggested that Kyrgios does have the makings of a Grand Slam champion but the Australian doubts he has the work ethic to achieve such a lofty ambition.

"I know what I'm capable of. Just depends. I'm a great tennis player, but I don't do the other stuff.

"I'm not the most professional guy. I won't train day in, day out. I won't show up every day. So there's a lot of things I need to improve on to get to that level that Rafa brings, Novak (Djokovic), Roger (Federer) have been doing for so long.

"Just depends how bad I want it. But, no, at the moment I don't think I can contend for a Grand Slam."

But Nadal insisted that all Kyrgios needs is respect for the sport, something which he accused the Australian of patently lacking when they clashed in Acapulco in February.

"If, if, if. Doesn't exist. There are a lot of important things that you need to do to become a champion.

"He has a lot of good ingredients. But, of course, there remains an important one sometimes, and that is the love, the passion for this game. Without really loving this game that much, is difficult to achieve important things."