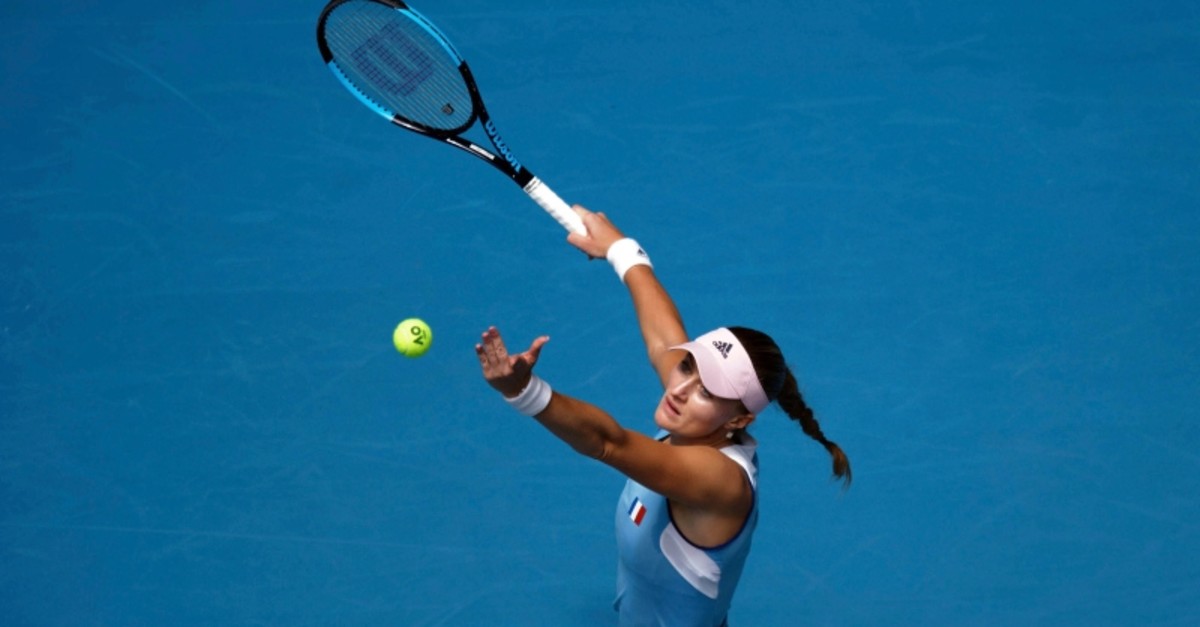 Kristina Mladenovic inspired France to a drought-breaking Fed Cup triumph after a nail-biting 3-2 win in the final against Australia on Sunday.
Mladenovic combined with Caroline Garcia to beat Ashleigh Barty and Samantha Stosur 6-4, 6-3 in the decisive doubles match at Perth Arena. She produced a herculean effort on the outdoor hard court after earlier Sunday upsetting the top-ranked Barty in a three-set thriller to move France into a 2-1 lead.
French Open winner Barty's remarkable season ended in heartbreak just one week after her historic US $4.42 million triumph at the WTA Finals in Shenzhen.
Former French Open doubles winners Mladenovic and Garcia broke three times to power France to their third Fed Cup title and first since 2003.
It was redemption for Mladenovic and Garcia who lost the decisive doubles match against the Czech Republic in the 2016 final.
"It's a lot of emotion to share this with (Garcia) after we failed on the last step three years ago," Mladenovic said. "We just wanted to take this little revenge for ourselves."
Earlier, No. 51-ranked Ajla Tomljanovic rebounded from a dispiriting performance in her Australian Fed Cup debut on Saturday against Mladenovic to record a 6-4, 7-5 victory over Pauline Parmentier in one hour and 33 minutes.
"I'm really glad I got a second chance and that I got a win," Tomljanovic said.
France captain Julien Benneteau chose veteran Parmentier over former No. 4-ranked Garcia, who failed to win a game against Barty on Saturday, to try and clinch the tie for the visitors.
The Australian struggled to consistently land her first serve but world No.122 Parmentier could not make her pay and it was an increasingly confident Tomljanovic who grabbed the decisive break in the 10th game to take the first set.
The 26-year-old held her nerve in the second set and gained the decisive break in the 12th game to ensure Australia's bid to end a 45-year drought remained momentarily alive.
In Sunday's opening singles, Mladenovic stunned Barty with a nerve-wrenching 2-6, 6-4, 7-6 (1) victory.
The No. 40-ranked Mladenovic started slowly before taking advantage of an error-strewn Barty, whose 15-match Fed Cup winning streak was ended in a see-sawing match lasting two hours and 31 minutes.
Mladenovic failed to close out the match on serve in the 10th game of the deciding set before dominating Barty in the tiebreak to produce arguably the best victory of her career.
"It's absolutely epic. This one is special because it's playing in the final for the country in front of an amazing, packed crowd," said an emotional Mladenovic after the match.
Barty started where she left off against Garcia, firing back-to-back aces to take the first game then broke Mladenovic's serve on her way to claiming the first set in 33 minutes.
But the French No.1 fought her way back into the contest and took advantage of a series of unforced errors by Barty to force a deciding set.
"She was the aggressor, took a few more chances and got the reward out there," Barty said.
In April, a revamped Fed Cup will comprise 12 teams playing over six days for an $18 million prize on clay courts in Budapest, Hungary.
Last Update: Dec 20, 2019 1:34 am
RELATED TOPICS