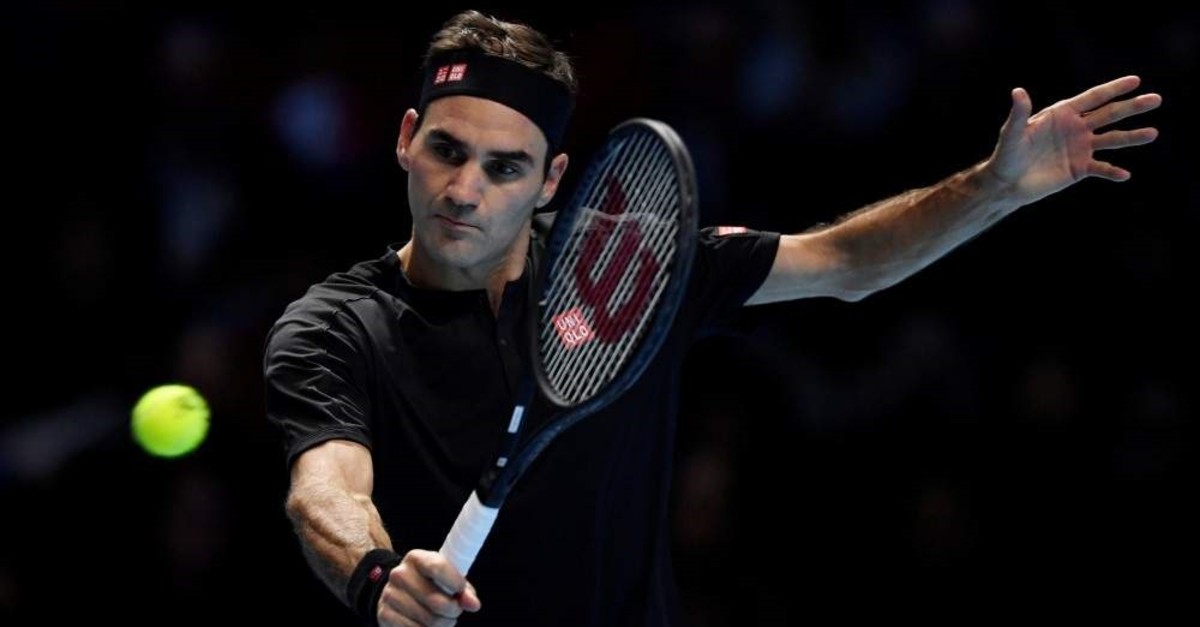 Federer will undoubtedly be one of the favorites for the tournament title despite his age, as the world No. 3 has competed in 31 major finals. (Reuters Photo)
by French Press Agency - AFP
Jan 14, 2020 1:24 pm

Djokovic, Federer and Nadal aim to keep the young challengers at bay as Australian Open qualifying rounds kick off despite concerns over raging bushfires across the country

Novak Djokovic admits the next generation of players is edging closer, but tennis' Big Three remain one step ahead as they aim to extend their dominance at the Australian Open.

Djokovic, Roger Federer and Rafael Nadal have kept a tight grip on the Majors over the past decade, with the Serb and the Swiss particularly prolific at the year's opening Grand Slam.

Between them, they have won 13 of the last 16 tournaments at Melbourne Park. This year, defending champion Djokovic is gunning for his eighth crown and Federer his seventh, having last lifted the trophy in 2018.

Adding spice is the prospect of Nadal breaking through for only his second win in Melbourne to equal the 38-year-old Federer's all-time record of 20 Grand Slam wins.

All players may also have to deal with hazy conditions caused by Australia's raging bushfires, after practice was suspended Tuesday when air pollution soared to hazardous levels.

"Obviously the Australian Open has been my favorite tournament. It's the tournament where I've played my best tennis," said Djokovic, who is coming off six straight wins during Serbia's victory at the ATP Cup.

"You have obviously Federer, Nadal, myself because of the experience and everything and the rankings, that we get to be probably named the top three favorites.

"But then you have (Daniil) Medvedev, (Stefanos) Tsitsipas, Dominic Thiem that are really showing some amazing tennis," he added.

"So everybody keeps on talking about NextGen player winning a Slam. You know, it seems like it's getting closer. Hopefully not this year. We'll see," he said.

As well as Medvedev, Tsitsipas and Thiem, Spanish world No. 10 Roberto Bautista Agut, who made the Wimbledon semifinals last year, and Canadian young gun Denis Shapovalov could also be in the mix.

Grigor Dimitrov, once nicknamed "Baby Fed" for his elegant style, is also playing well as he pursues his comeback from an injury-hit 2019.

Federer's last Slam win was in Melbourne in 2018 and he lost to Tsitsipas in the fourth round last year, but despite his age no one will be underestimating a man who has contested 31 major finals.

The Swiss star won four titles last year – he has claimed 103 in total – and shows no sign of losing his competitive edge.

"Both guys (Djokovic, Nadal) when they are injury-free they are always tough to beat," Federer said this week, while nominating Tsitsipas as another potential threat.

"I think the win from Tsitsipas at the World Tour finals (in November) was a big one. That was a huge step forward after he beat me here (Melbourne) last year. He had a great run here. Medvedev has obviously had a great run. Shapovalov is a very exciting player as well," he said.

With Alexander Zverev struggling for form and Australia's Nick Kyrgios prone to losing his cool, Greek star Tsitsipas is shaping as perhaps the most likely to trouble the big guns.

He made the semi-finals in Melbourne last year before falling to Nadal, and had a big breakthrough at the ATP Finals where he beat Thiem in the decider.

"I feel good. There's nothing I'm worrying right now. I feel good with my game, with my physical side," Tsitsipas said.

"The only thing that might concern me a little bit is when I come close to matches I feel like I've lost this competitiveness within me," he said.

So far, the only notable injury casualties among the men are Japan's Kei Nishikori and former U.S. Open champion Juan Martin del Potro, with Australian No. 1 Alex de Minaur nursing an abdominal strain.

Australian Open officials have air-quality experts on site to monitor pollution, with umpires able to halt matches if conditions deteriorate.

However, Tennis Australia CEO Craig Tiley has expressed confidence that the tournament will go ahead on schedule.