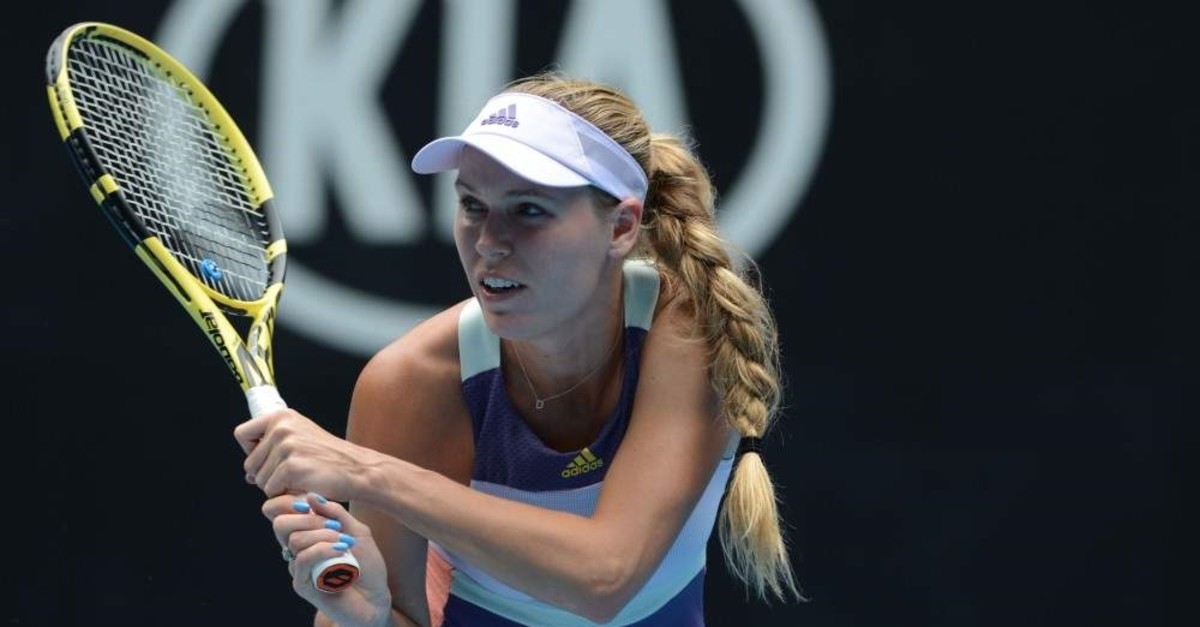 Wozniacki lost to Tunisia's Ons Jabeur in her last match, Melbourne, Jan. 24, 2020. (AA Photo)
by Jan 24, 2020 3:40 pm
Former world No. 1 Caroline Wozniacki made a tearful exit from tennis on Friday after defeat at the Australian Open brought the curtain down on her glittering career. Wozniacki, who announced in December that this would be her final tournament, lost 7-5, 3-6, 7-5 to lower-ranked Ons Jabeur of Tunisia.

The 29-year-old Wozniacki closes a career that saw her win 30 WTA titles, with her sole Grand Slam triumph coming in 2018 at Melbourne Park. She was in tears when the end came at the hands of 78th-ranked Jabeur, and just under two hours later her eyes were red and puffy as she arrived at her post-match press conference. "I was told there are tissues here. I see the tissues in case I need them, I think I'm cried out," said Wozniacki, who was given a round of applause by reporters. She was also given a generous reception by the Melbourne Arena crowd after hitting her last shot in tennis. "I finished my career with a forehand error. Those are the things I've been working on my whole career," she joked to the crowd. Choking back tears, Wozniacki, now ranked 36, added, "Guess this is just how it was meant to be."

Wozniacki, who made her professional debut in 2005, was carried triumphantly across the court by her Polish-born father, who is also her coach, Piotr. She also hugged husband David Lee, a former NBA star, as Neil Diamond's hit song "Sweet Caroline" reverberated around the court. Wozniacki finished 2010 and 2011 as world No. 1 and ascended to the top ranking again in 2018, the year she won the Australian Open. But later that year she revealed that she was suffering from rheumatoid arthritis, which causes fatigue and joint pain. She insists that has nothing to do with her decision to leave tennis and says she hopes to start a family.

Defeat for Wozniacki, minutes before Serena Williams's shock loss to Wang Qiang, deprived the close friends of an emotional meeting in the fourth round. Williams also cried when asked about Wozniacki's retirement. "She came into the locker room afterward; we were both kind of bummed about our matches," said the American, 38. It was then that Williams, who was a bridesmaid at Wozniacki's wedding, began welling up too. "She's had an amazing career. Oh my God, I'm getting emotional. Oh my," she said. "God, I'm going to miss her. Guys, I can't answer Caroline questions, I'm going to be crying. She's one of my best friends in the world."

Defending men's champion Novak Djokovic said Wozniacki, the first Dane to win a WTA title, left a "great legacy." "It's sad to see her leave tennis because she has been a great champion, and she has been a friend of mine for many years," he said. Wozniacki, who started playing tennis at age 7, said she had no second thoughts about retirement and could look back on her career with no regrets. "I had a dream when I was a kid. I wanted to win a Grand Slam. I wanted to be No. 1 in the world," she said. "People thought that I was crazy being from a small country, but I made it happen."
RELATED TOPICS