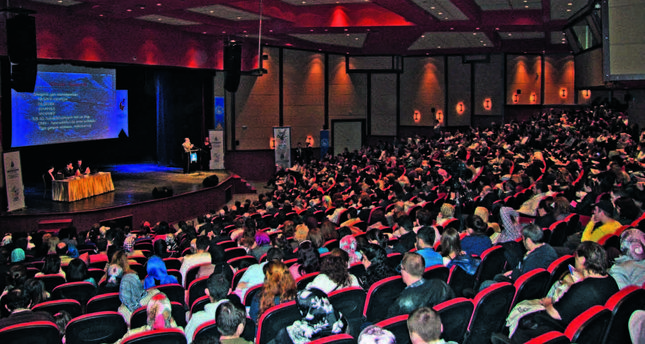 The megacity's transport network, its increased number and quality of hotels and world-renowned beauty has placed it among the world's popular cities

ISTANBUL — A Convention Tourism Report for Turkey prepared by the Association of Turkish Travel Agencies (TÜRSAB) states that 49,000 delegates have booked for conventions in Istanbul. The number is expected to reach 100,000 this year for the first time. "Istanbul's revenue from big conventions will climb to $250 million [TL 531.7 million]. It is also predicted that total convention and seminar revenues of Istanbul will exceed $1.7 billion," the report notes. The report indicates that Turkey finished 2013 with 34.9 million visitors and $32.3 billion in tourism revenue. However, Turkey is no longer only a country of sand, sun and sea; it also has a reputation of culture and convention tourism.

Convention centers primarily in Istanbul, Antalya, Ankara, İzmir, Bursa and Kuşadası are playing host to dozens of international conventions. According to the report, 10 years ago 80 international conventions with 500 participants or more were held in Turkey. This number climbed to 179 in 2012 and 196 in 2013. The number of big conventions climbed 254 percent in 10 years. The report goes on to explain that the total number of visitors for conventions, seminars and fairs in Turkey was 2.4 million in 2013, with more than $2.5 billion in convention tourism revenues. For world rankings, Turkey was placed 21st for culture and history, and 9th for convention tourism.

"Moreover, the intensive demand shows that Turkey and Istanbul have broader opportunities for 2014 and 2015. Convention dates are already booked in Turkey and Istanbul for 2014 and 2015; the numbers are 106 and 77, respectively. It is highly difficult to find an available room in Lütfi Kırdar and Sütlüce Convention Centers in Istanbul in May, September and October. It is estimated that Turkey's revenue of convention tourism will reach $3 billion in light of these figures. Istanbul's share of this sum will be more than $1.7 billion. Istanbul ranks ninth among other convention cities in the world with 113 activities that host more than 500 participants. Turkey ranks 11th in the same category with 148,000 delegates. Fifty-seven conventions have already been declared for Istanbul in 2014 and 20 for 2015. Forty-nine thousand delegates have already booked for conventions in Istanbul in 2014. The number is expected to exceed 100,000 for the first time this year," the report states.

The report shows that business trips to Turkey increased by 54 percent in the last four years. Istanbul ranked among the top 10 in the world for three years and ranked ninth in 2012 with 128 conventions. Istanbul outdid Lisbon, Dubai, Amsterdam, Hong Kong, Barcelona and Beijing. It was further noted that the short- and medium- term target of Istanbul is to make it in the top three among convention centers in Europe and top five in the world.

In its report TÜRSAB touched on Turkey's 2023 commercial objections, centenary of the foundation of Turkish Republic.

The report suggest that Turkey's Ministry of Culture and Tourism should start a new stimulus package especially for the cities which already has developed required substructure such as Istanbul, Ankara, Izmir, Antalya, Konya, Bursa and Mersin. TÜRSAB report also emphasize the importance of transportation facilities in the cities which are mostly selected by fair and convention organizing companies.