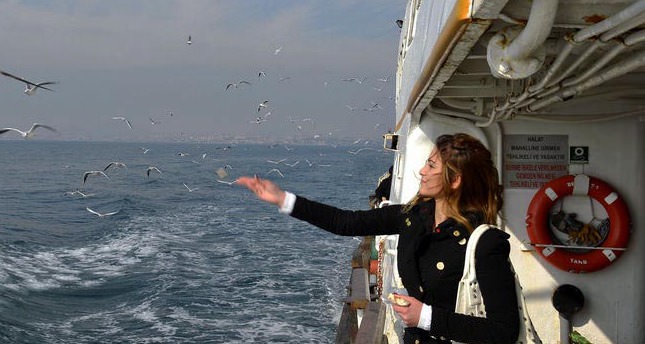 by AA
Apr 30, 2014 12:00 am
ISTANBUL—Germans ranked first for tourists visiting the city of Istanbul, according to Istanbul's provincial culture and tourism directorate.

Germans have become accustomed to Turkish culture due to the presence of more than three million Turks since the labor force agreement signed in the 60s. Germans are ranked first for the number of tourists visiting Istanbul in the last three months with around 350,000 citizens, followed by approximately 260,000 Russians and around 213,000 Iranians.

On the other hand the number of Ukrainian tourists coming to Istanbul fell during the past three months to 3 percent. In February, protests erupted in Ukraine following the ouster of former President Viktor Yanukovych, after he opted to ditch a trade deal with the EU in favor of closer ties with Russia in November 2013.

Germans made up 9.1 percent of the tourists visiting Istanbul in January 2014, while Russia stood at 6.1 percent and Iran 5.2 percent.

According to the Turkish Statistical Institute's report for the first quarter of 2014, tourism revenue reached $4.8 billion across Turkey, an increase by 3.4 percent compared to same period of 2013, with 76.2 percent of tourism revenue coming from foreign tourists.

Foreign tourists spent an average of $877 during the first three months of 2014.