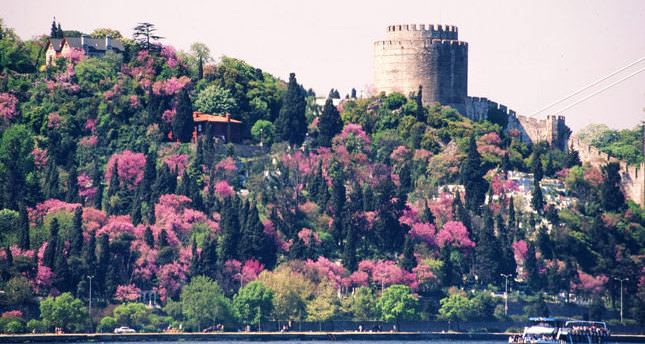 by Daily Sabah May 12, 2014 12:00 am
ISTANBUL — Chairman of the Turkish Tradesmen and Artisans Confederation Bendevi Palandöken said his organization is expecting 45 million tourists to visit Turkey this year.

In addition to noting that the number of tourists coming to Turkey increased by 7.6 percent last year, reaching almost 40 million, Palandöken added that "Turkey's tourism income reached $32.5 billion (TL 67.5 billion), an increase of 11.4 [percent]. Average spending per person totaled about $824. While foreign tourists spent $749 on average, Turkish citizens residing in foreign countries spent $1.252 billion when they visited Turkey. There are 1.5 million people working in the Turkish tourism industry."

Also, the Association of Turkish Travel Agencies released a report about Turkish cruise tourism which forecasts that 22 million people will take part in cruises this year.

The report noted that "While world ports expect 5 percent growth in the cruise tourism industry, Turkey's growth potential is above the world average. Turkey's cruise tourism is expected to grow by 2 to 3 percent in the next three years. The most important reason for this is the economic crisis and strikes in Greece. Almost 40 percent of the cruises coming to Turkey depart from Piraeus Port in Greece and economic incidents in Greece directly affect Turkey in a negative way." Palandöken added that measures should be taken ahead of the high season to combat illegal alcoholic drink sales to prevent the high number of alcohol related incidents among tourists which were reported to police during the last tourist season.