Halal tourism takes off in Japan among Asia's Muslim travelers 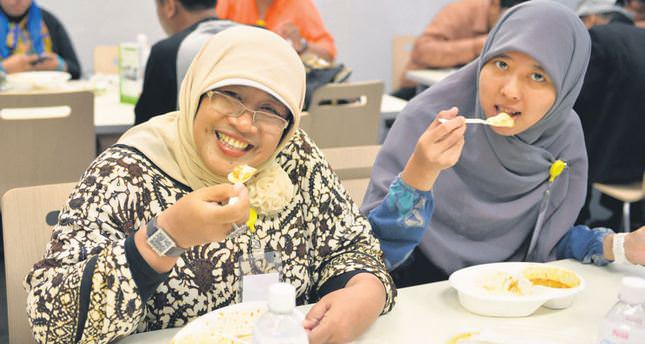 With the Islamic world observing the holy month of Ramadan, Japan is promoting its tourism industry in predominantly Muslim South East Asia to attract Muslim visitors

Japanese businessmen are planning to expand into the growing halal tourism market. Shops with prayer rooms are starting to feature products such as hijabs made from local silk and even halal-certified whale meat.

Prayer rooms, hijabs made from local silk and even halal-certified whale meat are appearing in Japan as tourism bosses wake up to the demand from Muslim travelers. For a largely homogeneous country with only around 100,000 practicing Muslims, that means groping its way through unfamiliar customs, as it looks to tap a growing market to help it double the number of overseas visitors by 2020. "Muslim travelers still do not feel comfortable here," Datuk Ibrahim Haji Ahmad Badawi, head of Malaysian food company Brahim's, said at a recent seminar on halal tourism in Tokyo. "The government seems to have understood this." Last year, seminars like this one were held in 20 different regions in Japan where hoteliers and restaurateurs were invited to learn how to cater to Muslims.

The Osaka Chamber of Commerce handed out 5,000 leaflets as a guide to what can and cannot be eaten - the idea of forbidding consumption of things like alcohol or pork is anathema to omnivorous and foodie Japan. With the Islamic world currently observing the holy month of Ramadan, tourism to Japan is being heavily promoted in mainly Muslim Southeast Asia, where visa requirements were relaxed in 2013 for Malaysia and Thailand.

Indonesia - the largest Muslim-majority country in the world - is slated to follow shortly. According to the Japanese Tourist Office, the number of Indonesians visiting the archipelago in 2013 was up 37 percent on the previous year, while 21 percent more Malaysians came.

Chinese tourist numbers have recovered from their plunge following the 2012 eruption of the spat between Beijing and Tokyo over islands in the East China Sea. But broadening the appeal of Japan as a destination is key if the industry is to meet the 20 million visitors target set for 2020 when the Olympic Games come to Tokyo. The influx of athletes and spectators from all over the world that the sporting jamboree will bring is also playing into the drive to make the country more Muslim-friendly. "Can you imagine the number of Muslim athletes who will then come to Tokyo? We'll have to feed them," said Badawi. Brahim's as a company has already signed a deal with All Nippon Airways (ANA), one of Japan's biggest carriers, to supply inflight halal meals, Badawi said. A number of large hotels have also approached him looking for advice on how they can cater for Muslim guests. For Badawi, despite Japan's slow start, the direction of travel is clear: Muslims looking for holiday destinations will come and in bigger numbers, giving Tokyo an ever-larger slice of a $600 billion (TL 1.2 trillion) global pie.

Slowly, various regions across Japan are catching on. Major airports have dedicated prayer rooms, and tourists looking for the perfect present can pick up hijabs made from Japanese silk as they pass through Kansai International Airport, near Osaka, a recent television report showed.

Longerterm visitors are also being catered for, with 19 universities offering halal menus in their cafeterias in a bid to boost the number of Muslim students. Customers looking for an authentic - but halal - Japanese dish already have a choice in Tokyo, including a yakiniku barbecue restaurant run by Roger Bernard Diaz, a Sri Lankan Catholic who converted his business, but not his religion. He has no qualms about making the change to offering a range of halal meats and says it has helped him garner reservations from customers from Southeast Asia and even the Gulf.

But sourcing produce can be difficult. "It's hard to find all the ingredients," he admits while pulling a Brazilian-raised halal chicken from a dedicated freezer. Muslims who want to sample whale meat are also catered for after Japan's whaling mother ship, which slaughters the animals on their controversial hunt, was certified halal-compliant last year. The Japan Halal Association, which was founded in 2010, is one of only two bodies that can grant this status in the country.

Its chairwoman, Hind Hitomi Remon, said that business is brisk. "We are an associate member of the World Halal Council," she said. "Since 2012, we have issued certificates to 40 companies, and that number is set to rise a lot this year," a fact she says is directly attributable to Tokyo being awarded the Olympic Games for 2020. And even if the tourists don't want to eat in Japan, producers are readying to send produce to them, with exports such as halal-certified soy sauce and even rice grown in northern Akita prefecture. But until the numbers swell a little bit more, businesses catering to Muslims still have to keep an eye on what their other customers want. Yakiniku restaurant owner Diaz says around half of his customers now are Muslims, yet he still has to cater for his other patrons. "It's hard to do business here without selling alcohol," he said.
Last Update: Jul 10, 2014 1:05 am
RELATED TOPICS