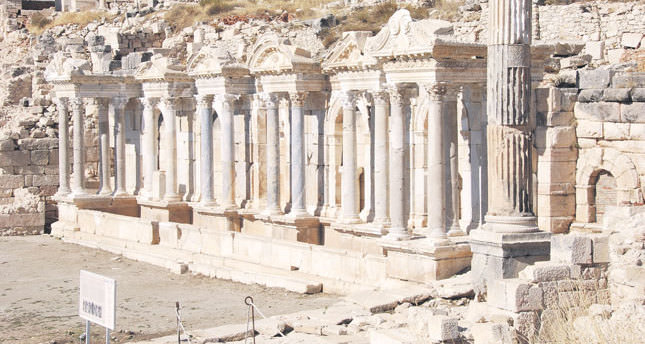 Lying in the southwestern Burdur province, Sagalassos was an important Pisidian town going back to Roman times. A number of lakes form a typical feature of the regional geography, that is surrounded by a mountainous landscape.

Under the leadership of Professor Jeroen Poblome, archeologists recently unearthed a 600-year old kitchen. Burdur Mayor Hasan Kürklü paid a visit to the area situated in Ağlasun district, which is 7 kilometers from Sagalassos. Poblome said that a pottery workshop dating back to the fifth century B.C. was discovered on the east side of the region. "We revealed a countertop made of brick and clay. There are holes which were presumably designed for cooking pots heated with coal.

The newly discovered sections support that ceramic production was very popular in Sagalassos," he continued. Poblome said that archeologists discovered moulds, tools, oil lamps, water bottles and green clay which were shaped and ready to cook with, along with a number of other interesting findings. Additionally, a common building was unearthed while excavating another section named "the Neighborhood of Potters." "Presumably, the ancient people held meals at this site because we found different kinds of pots and pans. The findings go back to 200 A.D.," Poblome added.

In written sources, it was reported that the history of Sagalassos dates back to 333 when Alexander the Great beat the Persians in the Battle of the Issus River.

In 2009, the ancient city was included in UNESCO's Temporary World Heritage list. Sagalassos is frequently mentioned in antique texts as a place famous for its love stories and plots. Described as the favorite city of emperors, Sagalassos features buildings, public bath, ceramic production center and a lower Agora (public square) at the entrance. There is a theater and a library, which was founded by Neon, the greatest ruler of Sagalassos in the first decades of the second century A.D. The heart of the city features a main Agora, an assembly building, a church and the Fountain of Antonins, which was built between 161 and 183.

The large area has been undergoing excavations and restoration since 1989. The preliminary excavations carried out under the head of Professor Marc Waelkens of Catholic University of Leuven. The Burdur Archeological Museum displays the sculptures of Roman Emperors Marcus Aurelius and Hadrian which are five meters height. Sagalassos displays a number of artifacts from the Hellenistic and early Byzantine periods.
Considered as one of the five important ancient ceramic production centers, the city remained well-preserved among the other Mediterranean archeological sites.
Last Update: Aug 25, 2014 2:18 am
RELATED TOPICS