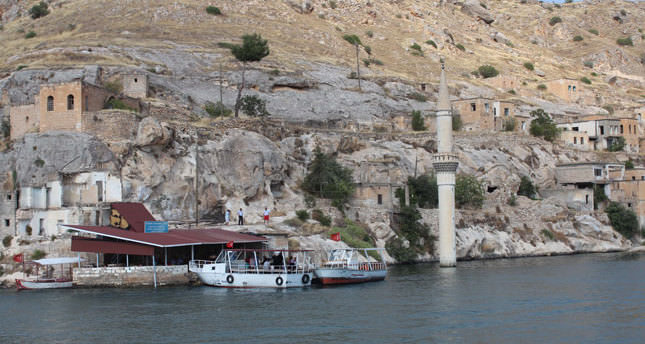 by AA Aug 25, 2014 12:00 am
Reminiscent of a coastal town and situated in the middle of moorland, Şanlıurfa's Halfeti district in southeastern Anatolia is becoming the tourism gem of the region. During the summer, tourism is lively in Halfeti due to its calm and peaceful environment, and the district was included in the Italybased Cittaslow International Coordination Committee's network last year.

In the year 2000, some parts of Halfeti submerged when the Birecik Dam was constructed. Regarded as the "hidden paradise" of the Southeastern Anatolia region with its natural beauties and stone houses, Halfeti drew 700,000 visitors in the first seven months of 2014. To visit the submerged parts of the district, tourists have to travel by boat.

In his statement to Anadolu Agency (AA) reporter, Mayor Mustafa Bayram said that the district has recently caught the eyes of film producers. He stated that more serious investments are necessary to keep tourists in Halfeti. Bayram also mentioned that they have taken important steps regarding accommodation and other issues, adding, "We host thousands of tourists every year. However, we are still struggling with some problems. We are conducting regular inspections in the region. We set fixed prices on restaurants and boats. We also impose punishments on boat managers who carry more tourists than they are supposed to." Bayram concluded that they are doing everything they can in order to turn the district into a tourism hub.
Last Update: Aug 25, 2014 1:28 am
RELATED TOPICS