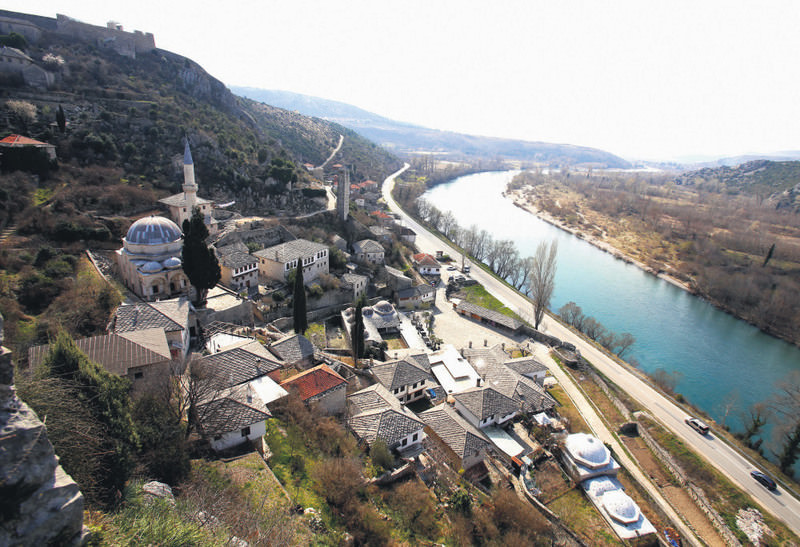 by Anadolu Agency Mar 16, 2015 12:00 am
The historical Turkish village, Pocitelj, in Bosnia Herzegovina's tourism attraction Capljina city, which is famous for its narrow streets, authentic houses which were stone built from top to bottom, fortress dating back to the Kingdom of Bosnia and Ottoman mosques, madrasahs and public bath welcomes thousands of tourists from around the world, especially from Turkey, every year.

According to the records, the oldest building of this "stone city" is the fortress built in the 15th century. Pocitelj, which became an important center after the Ottoman Empire conquered the region, is home to several Ottoman constructions such as Şişman İbrahim Pasha Mosque, Pocitelj Clock Tower, a madrasah, a public bath and an inn. The village draws people's attention at first sight with its unique houses, and was declared a "National Monument of Bosnia and Herzegovina" in 2003 and taken under protection. Moreover, the village was nominated for the UNESCO Cultural Heritage list by Bosnia-Herzegovinian officials in 2007.

During the Bosnian war, many important buildings in the village including the mosque were badly damaged. Through restoration works, the original state of the buildings is being preserved. Pocitelj enchants people with stone houses, flowers in its gardens and the scenery from Neretva River, and takes its visitors on a journey to the Middle Ages.

Regarded as one of the world's most beautiful miniature settlements, Pocitelj is also famous for the pomegranate trees which surround the village. It is possible to see a pomegranate tree in almost every garden and purchase pomegranate juice and pomegranate molasses. Furthermore, the stone houses located in Pocitelj were allocated to painters for a period of 15 days during the Communist period to provide inspiration to artists. Safet Zec, one of the most well-known painters of Bosnia-Herzegovina resides in a magnificent mansion in the village and uses the village as a source of inspiration.

Traveling to the village, which is also known as "the Pearl of Herzegovina" is quite easy. The village can be reached via the M 17 highway. It is 30 kilometers from Herzegovina's most important tourism center Mostar, which is known for its historical Mostar Bridge and located near the Neretva River.
Last Update: Mar 16, 2015 9:36 pm
RELATED TOPICS