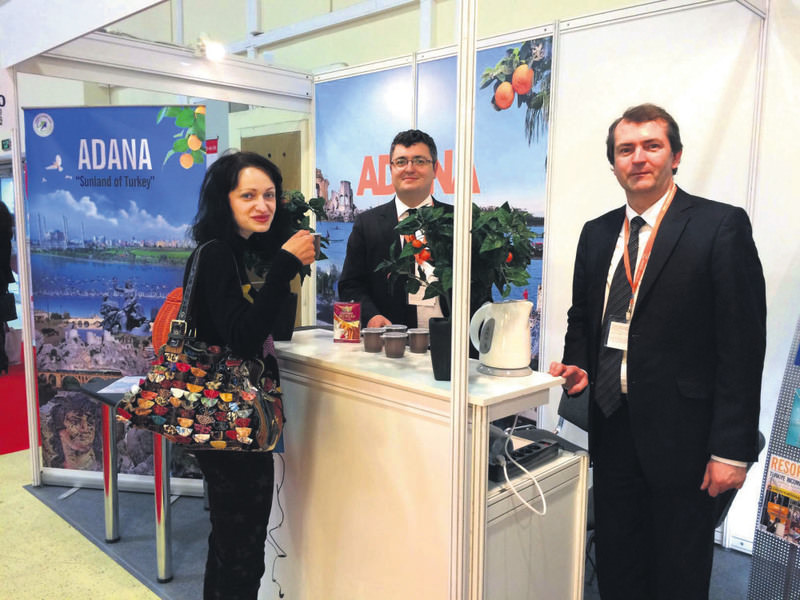 by Betül Alakent Mar 20, 2015 12:00 am
Notable names in the Turkish tourism sector attended the Moscow International Exhibition Travel and Tourism (MITT) Fair held in Russia, which is currently suffering from sanctions imposed by the U.S. and the EU. Yet Russians showed great interest in Turkey's stand at the fair, which is the largest one held in Russia. Attending the fair, Culture and Tourism Minister Ömer Çelik said, "We are taking measures to prevent the economic situation in Russia from affecting Turkey. Ministry officials came to Russia four times in the last five months. We are engaging in crisis management. We do not want to generate any losses here." Sector experts also commented on the possible loss in the tourism market. They said that Russians were last-minute customers, adding, "Maybe there will be no decrease at all. The net situation will be clear in May and even if there is a loss, it will be around 15 percent at most." Limak Hotels Tourism Coordinator, Kaan Kavaloğlu, said that Russians have made early reservations for the last five years, but they suspended it this year due to the economic problems they are facing. Emphasizing that this is creating a panic in the sector, Kavaloğlu said, "The decrease from the Russian market will not reach 40 percent, contrary to expectations. It will be 15 percent maximum." In addition to saying that hotels in Turkey will reduce their prices by nearly 10 percent, Kavaloğlu noted, "Turkey gained an advantage in the parity of the euro-dollar. We are returning this advantage to the customers in the market." Kavaloğlu also added that 10 percent of the Russian tourists that would normally go to Europe, could shift to Turkey.

Güral Premier Chairman, İsmet Güral, said that the tourism sector has entered into an early panic. Saying that this panicked climate might have been created in order to reduce prices, Güral stressed, "It has been exaggerated in the market. We expect the loss to be around 10 percent." Kaya Holding Vice Chairman, Doruk Kaya, said the decrease from the Russian market was being reversed every month. "While the loss in February was around 70 percent compared to the previous year, the loss in March dropped to 40 percent. This gives us the message that Russians delay their holiday plans to the last minute," Kaya said. Emphasizing that the situation might change at the last moment, Kaya stated that the market could reach the same rates as last year's.

Sueno Hotel Vice General Manager, Yüksel Gürhan, said "While one dollar equaled 32 rubles last year in Russia, it equals 61 rubles this year. There has been serious inflation in the country. However, the Turkish tourism sector was more panicked than the Russian one. Deluxe hotels in Turkey provide services for the segment that we call 'A plus.' There is a serious demand from Russia for these hotels right now, and this gives us the message that the rich Russian tourists are shifting to Turkey."
Last Update: Mar 20, 2015 1:37 am
RELATED TOPICS