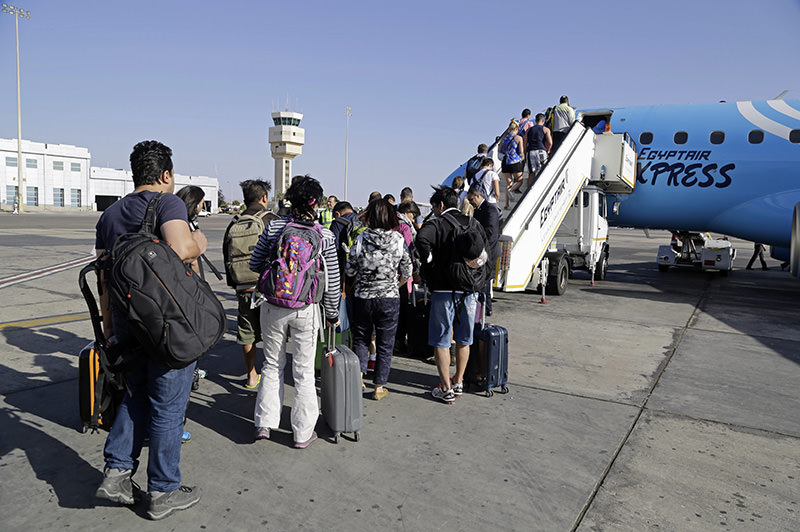 Passengers board an Egyptair Express plane bound for Cairo at Sharm el-Sheikh Airport, south Sinai, Egypt, Monday, Nov. 9, 2015 (AP photo)
by Anadolu Agency
Jan 21, 2016 12:00 am
A few months ago, Khaled Hassanien was working with a travel agency, but he was laid off after a Russian passenger plane went down after taking off from Egypt's Red Sea resort of Sharm el-Sheikh on Oct. 31.

"I was told to stay at home as the agency suffered major losses after the plane crash," Hassanien, 37, told Anadolu Agency on Wednesday.
"Now I work as a taxi driver to get money for my family," added Hassanien, the father of a 6-year-old child.

A Russian Airbus A321 aircraft crashed on Oct. 31 shortly after taking off from Sharm el-Sheikh, killing all 224 people on board.

Russia has said that terrorism was behind the plane tragedy, but Egypt says that an investigation into the crash has not yet decided the causes of the crash.

A Daesh affiliate in Egypt has already claimed responsibility for the crash, linking it to Russia's military intervention in war-torn Syria.

Egypt has also been hit by a spate of attacks by Sinai-based militants that has also scared away foreign tourists.

Egypt's Tourism Ministry said on Tuesday that the country's tourism receipts dropped by 15 percent in 2015.

Egypt earned $61 billion in tourism revenues in 2015, down from $7.4 billion in the previous year, the ministry said in a statement on Tuesday.

According to the statement, Egypt's tourism sector has been losing EGP 2.2 billion ($283 million) per month since the Russian plane crash.

The ministry said that a falling Russian rouble has also caused Egypt's tourism revenues to drop by 20 percent in January and February of 2015 compared with the previous year.

Egypt's Red Sea resorts are a popular destination among tourists from Russia and Europe.

Tourism expert Mohamed Abu Kreisha criticized the government for its slow reaction in dealing with the tourism crisis.

He said that several hotels in Sharm el-Sheikh and Hurghada have been forced to close due to the dropping numbers of tourists coming to Egypt
"The government has to launch a massive propaganda campaign to show the world that the country is safe for tourists," he added.

Egypt has been scrambled to convince world countries to resume their flights to Egypt following the Russian plane crash.

Egypt's tourism industry has been hammered by five years of political turmoil since a popular uprising unseated long-term autocrat Hosni Mubarak in 2011.