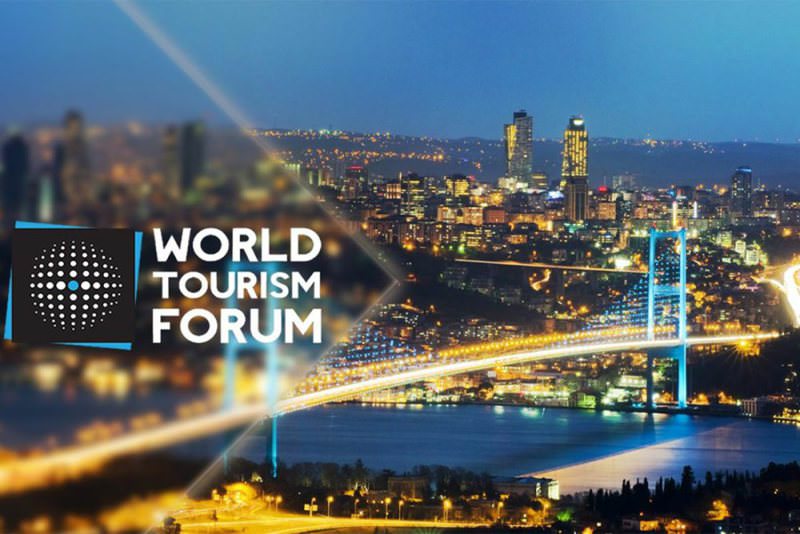 The World Tourism Forum (WTF) is being held for the second time from Feb. 4-6 at the Istanbul Lu00fctfi Ku0131rdar Convention and Exhibition Center in Istanbul.
by Gamze Gül Feb 06, 2016 12:00 am

Leading tourism professionals from around the world showed great interest in the second World Tourism Forum in Istanbul, commenting on major trends, potential of the markets and other issues regarding the tourism sector

The large group of tour operators and hotel representatives from Italy participating in the World Tourism Congress indicates how important the Turkish market has become for Italian tourism. Maria Antonietta Princivalle, general manager of Incoming2Italy.it, who leads the group, pointed out that the growth of the Turkish market in Italy is fast and very important and that Italian companies are planning more investments to attract more Turks.

"Turkish tourists choose Italy for cultural and gastronomical reasons since Turkish people are very similar to Italians. Most visits from Turkey occur during spring and fall seasons. However, winter is also becoming popular due to skiing, especially in San Candido. "

According to Princivalle, Turkish tourists mostly prefer the regions of Apulio, Tuscany and Veneto, but the launch of Turkish Airlines flights to Sicily has increased the interest of Turkish tourists since early bookings make plane tickets much cheaper.

"Since the Russian market disappeared two years ago, the goal of Italian tour operators has become attracting more visitors from Turkey. Italy is the first destination among Turks, so the Turkish market is going to be most important," she said, noting their focus has now shifted.

Princivalle added: "We send a lot of tourists to Turkey, especially Istanbul. Greece has become too expensive, and Egypt is dangerous for us. Also, Turkish food is similar to our taste, and it is easier for Italians to adapt to the food."

According to her, Istanbul, Bodrum, Antalya and Cappadocia rank as the most preferred destinations in Turkey for Italian tourists, while Rome, Venice, Tuscany and Apulia are attractive for Turkish tourists.

These companies have now introduced a new website, www.italiantasteforyou.it, which includes a selection of Italian companies and works only to put the tour operators and customers in contact without any commission fees being charged.

A new website recently put into service by tourism professionals with 25 years of experience, Turizm-ik.com, targets the employee needs of the tourism sector in Turkey. The two-month-old career service, which is the first of its kind in Turkey, offers to put tourism employers and professionals in contact in a way that emphasizes expertise and compatibility.

General Manager Serkan Pekel explained that the need for such a service emerged as a result of the high turnover in the tourism sector, especially in Turkey where tourism operations are mostly seasonal.

Pekel said it is a difficult task for companies in the tourism sector to function properly since there are many professionals with different levels of experience and so much interaction between them. According to Pekel, the biggest goal is to bring together all tourism professionals as though they are part of the same family, making them feel like they are at home.

The service also plans to launch the Tourism Academy in six months to provide educational seminars and training for employees in their system. However, in particular, officials have already began meeting young newcomers to the sector at universities to have them educated in line with the sector's needs and the interview processes in the sector with the aim of preparing them for their professional careers.

Active since 2012, the Turkish African Business Association (TABA) has worked eagerly to meet the needs of African and Turkish businessmen with investment plans. However, the function of TABA is not just limited to putting businessmen from the two sides in contact. It serves as a tool for African businesses to open to the European market as well as connecting them with other businesses on the African continent.

According to TABA President Fatih Akbulut, Africa has a tremendous potential with its large population, while the Asian and Middle East markets are slowly becoming less attractive for investors. Akbulut said that 20 percent of Africans are middle and upper-middle class and that they travel, shop and have similar consumer profiles to people in the West.

Akbulut indicated that the due to the increased interaction between Africa and Turkey, the country can easily become a tourist destination for traveling Africans since the income gap is very high compared to world levels and Turkey can offer more reasonable prices than Europe in addition to its geographic advantage and cheaper flight prices.

Noting that Turkey's ties with African businesses are in sectors such as construction, machines and parts, textiles, consumer goods and energy, Akbulut pointed out that commercial relations would also bring tourism investments to the scene as both sides become closer and culture is exchanged.

He said biblical tourism can also play a role introducing the sector to African quests since the "Turkey brand" is very trusted in Africa and can spread to the tourism sector over time.

"The Turkish government has increased the number of its embassies in Africa to 38 over the years, while government-linked organizations, such as TİKA and DEİK, are also doing their part. Turkish Airlines have also played a major role in improving relations with Africa by launching flights to many locations in Africa. However, more NGO work is needed."

Placing itself as a forerunner in improving connections between Turkey and Africa, TABA is most active in eastern Africa as well as Brundi, south Sudan and Uganda and sees higher potential in Nigeria and South Africa. In addition, it is preparing for a major Turkish African Business Summit this fall in İstanbul and plans to increase the number of its business contacts to over 10,000 by the end of this year.

VIP Turizm, which is one of the oldest establishments in the sector in Turkey, functioning for over 48 years, is also participating in the World Tourism Forum to extend its reach to customers. Chairman Ceylan Pirinçcioğlu said, "Tourism is an area that can serve around 2 million people, but security is increasingly becoming a challenge for the sector." Emphasizing that social media enables travelers to discover new destinations and gives them the opportunity to find cheaper services and flights at lower prices, Pirinçcioğlu stressed the risks the tourism sector faces, as tourist locations become targets of terrorist groups.
Last Update: Feb 06, 2016 12:15 pm
RELATED TOPICS