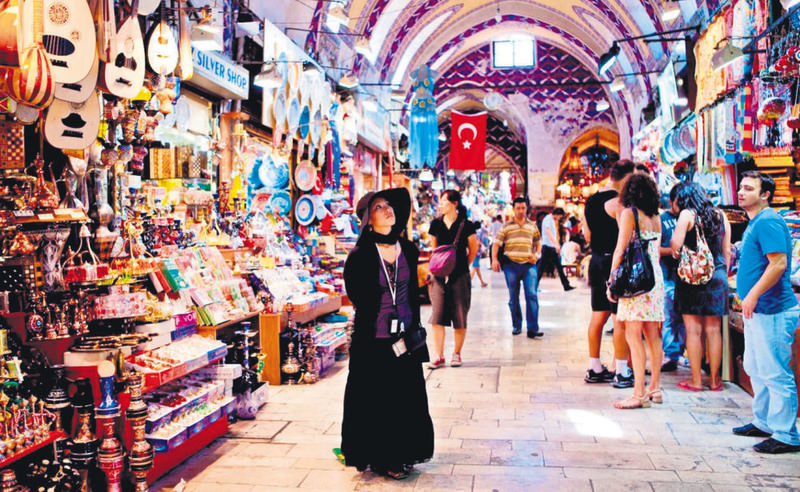 Since the number of Russian tourists dropped, Turkish tourism companies are now trying to attract tourists from Eastern Bloc countries.
by Daily Sabah Mar 18, 2016 12:00 am

Since Turkey's tourism has been negatively affected by the decline in the number of Russian tourists with its economy in recession, Turkey has sought alternative markets to revive its tourism sector. In line with this, Turkey's Calypso Tours aims to buy Romanian Prestige Tours

Since the number of Russian tourists dropped due to the crisis between Ankara and Moscow, Turkish tourism companies are now trying to attract Western tourists, with particular steps taken to win tourists from Eastern Bloc countries. Turkish based Calypso Tours is one of the first companies to initiate such moves by targeting Romania through purchasing Prestige Tours, one of the oldest and biggest tourism operators in Romania.

Calypso is now striving to attract tourists for the new season and is planning to expand Prestige Tours abroad with support from the Spanish investment fund GED. Calypso will lead the way in Romania and start charter flights between Bucharest and Antalya. Prestige Tours carried 6,000 tourists last year, and aims to increase its number of passengers to 20,000 in 2016.

Prestige Tours was one of the first tour operators of the new system in Romania, a country that adopted democracy after the Socialist President Nikolai Ceausescu was overthrown in 1989. Established in 1990, the company was purchased in 2011 by GED, one of Spain's biggest funds. In 2014, the company's turnover was around 15 million euros, and it naturally started attracting new investors.

Established in 2004 by Mustafa Kadiroğlu, Calypso Tours is one of the major players in the Russian tourism market and also works with other Commonwealth of Independent States countries, including Ukraine and Kazakhstan. It used to draw rich Russians to Turkey and had recently started helicopter tours for around 1,500 euros per hour. Kadiroğlu noted that they were trying to draw the attention of VIP tourists and were planning at least 100 hours of helicopter flights.

A few days ago, the Russian Federal Tourism Agency (Rosturizm) announced that 13 out of the 19 countries which were taken off the list for allowed tour operators, due to Russian sanctions on Turkey, have been added back to the list. The announcement noted that 13 of these 19 companies were not bound by Turkish laws or under the control of Turkish citizens, and were therefore reinstated.

In January, the Russian government enacted legislation exempting some Turkish firms from sanctions previously imposed on Turkish imports, following the November downing of a Russian jet by Turkey for violation of Turkish airspace. According to the draft legislation on the Russian government's website, some rules will be determined with a view to foster trade with Turkish firms and narrow the scope of the sanctions imposed on Turkish imports. This decision is thought to have been taken because the bans imposed on Turkish goods were increasing inflation in Russia, which had already been following an upward trend.

The decision is aimed to exempt some Turkish goods and Turkey-based producing firms from the sanctions. With the draft legislation put into effect, where the products imported from Turkey cannot be substituted with domestically-produced goods, the embargo will be eased in those areas. The Russian Ministry of Development noted that Sberbank, which also owns Turkey's Denizbank, should remove the restrictions on the transactions between Turkish and Russian firms.

According to the news in Russian Kommersant daily, in order not to risk delaying the construction work scheduled to be completed for the 2018 World Cup, Russia plans to provide some flexibility for Turkish construction companies. An unnamed Russian official stated that Turkish companies for whom the sanctions will be eased will be able to operate in Russia only if they form partnerships with Russian companies, and operate under the condition Turkish citizens have a maximum of 25 percent ownership in those companies.

Russia has been going through hard times due the decline in oil prices, as well as Western sanctions and the slump in capital inflow. This makes Turkey more important as a major trade partner for Russia, whose exports to the country amount to more than $25 billion annually. The foreign trade volume between Turkey and Russia soared from $26.2 billion in 2010 to $31.2 billion by the end of 2014 - a 17.3 percent upsurge. In 2014, Turkish companies invested more than $10 billion in Russia, with tourism, construction, food, home appliance and banking sectors taking the lead. Turkey also functions as a major market, enabling Russia to access global markets.