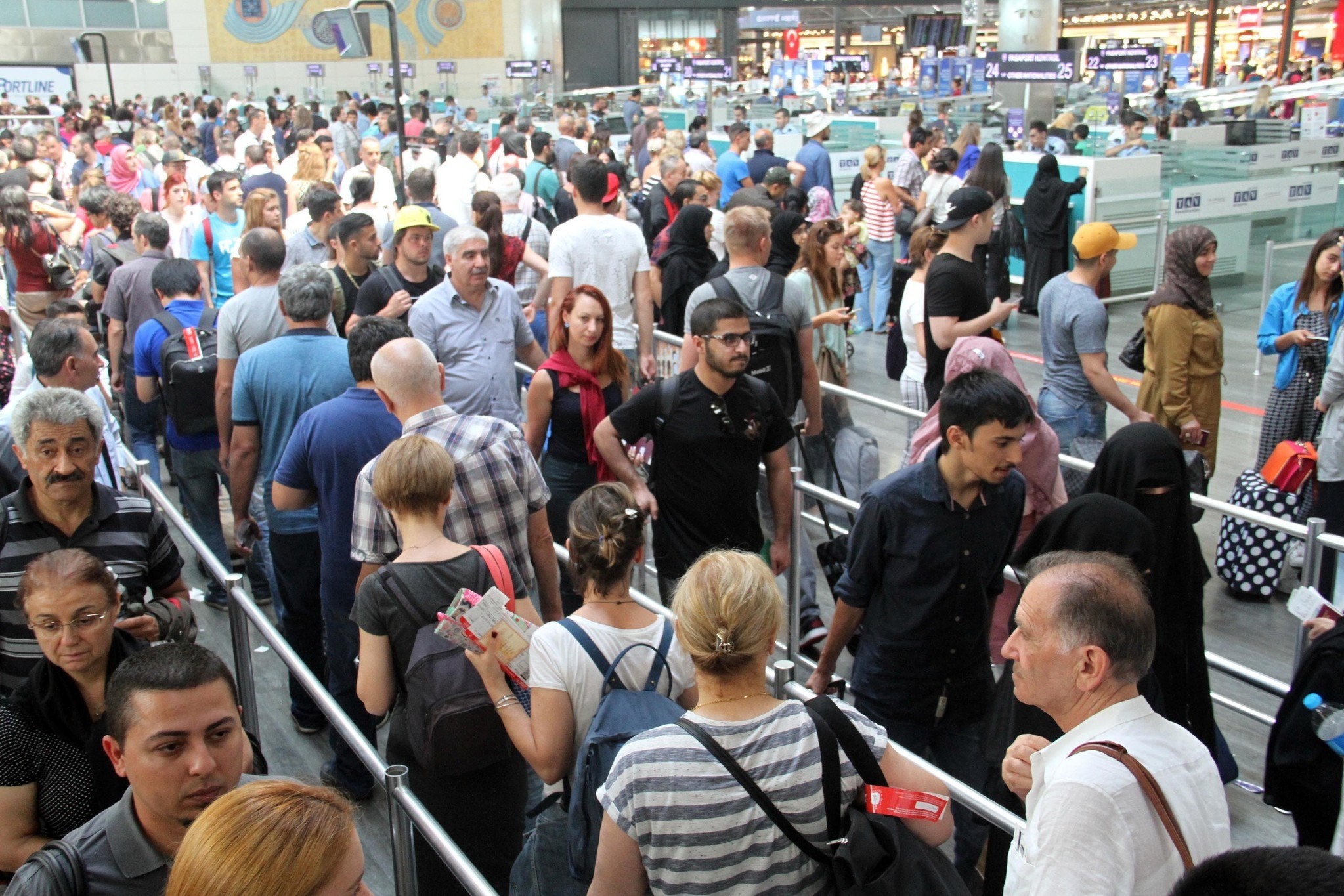 Last Sunday marked the end for millions of a nine-day holiday, a record-setting day for Istanbul’s two airports as more than 2,200 flights landed and took off, marking a fast recovery from the suicide attacks that struck Atatürk International Airport on June 28

Millions of Turks wrapped up a lengthy holiday on Sunday and returned home at the end of the Bayram holidays. Tired and frustrated at the prospect of returning to work, holidaymakers caught flights to Istanbul, whose two airports on the European and Asian sides set new records for passenger travel. Latest figures show a total of 2,228 flights took off or landed at Atatürk International Airport and Sabiha Gökçen airports on Sunday. Atatürk International Airport saw brutal attacks, blamed on the DAESH terrorist organization, on June 28, which killed 45 people and injured hundreds, when three assailants opened fire and detonated suicide bombing vests near the international arrivals gate.

Prime Minister Binali Yıldırım said yesterday in Ankara that despite the brutal attacks, the large numbers of travelers "proved [wrong those] people [who] thought Turkey would not stand back up and that tourism will be hurt." Yıldırım said the record number of travelers and said those who believed Turkey "was devastated" clearly "did not know this country, this nation."

"This is a record in the history of Republic of Turkey, and Atatürk airport alone had 1,443 flights. Thirteen years ago, before AK Party came to power, the total number of airplanes in all of Turkey's airspace was only 1,100. This is how Turkey fares. This shows Turkey's power to those wanting to intimidate it with acts of terror," he said. Yıldırım recalled that after Brussels airport suffered a similar attack, it was closed for ten days, while Atatürk Airport was reopened just hours after the attacks. "This is an indication of Turkey's preparedness against any extraordinary development, any risk."

Official numbers show some 233,542 passengers flew on Sunday. The previous record set at Atatürk Airport was 1,424 takeoffs and landings, set only three days after the terror attack in June.

A total of 758 takeoffs and landings were recorded for Sunday at Sabiha Gökçen Airport, a hub for domestic flights, mostly by no-frills carriers.

The Ramadan Bayram holiday started for many more than nine days ago as people hit the road one day before the weekend, most headed either to vacation resorts in southern Turkey or their hometowns in central, eastern and northern Turkey. Along with the airport, a newly opened toll bridge which shortened travel times to western and southern Turkey from Istanbul saw a huge demand from holidaymakers. Some 95,000 vehicles crossed the Osman Gazi Bridge in Gulf of İzmit in Marmara sea each day during the holiday, more than double the projected figure of 40,000 vehicles crossing per day.

Istanbul, situated on both Asia and Europe, is one of the busiest flight hubs in the world, especially considering connecting flights. A third airport is under construction in the north on the city's European side that will likely replace Atatürk International Airport, which is located in the middle of a busy district with heavy urban development. The new airport is thought to be the largest in the world and scheduled to open in 2018. The airport will have a capacity to serve about 100 million passengers annually, will have six runways and a 6.5 million square meter airport with a capacity for 500 airplanes.