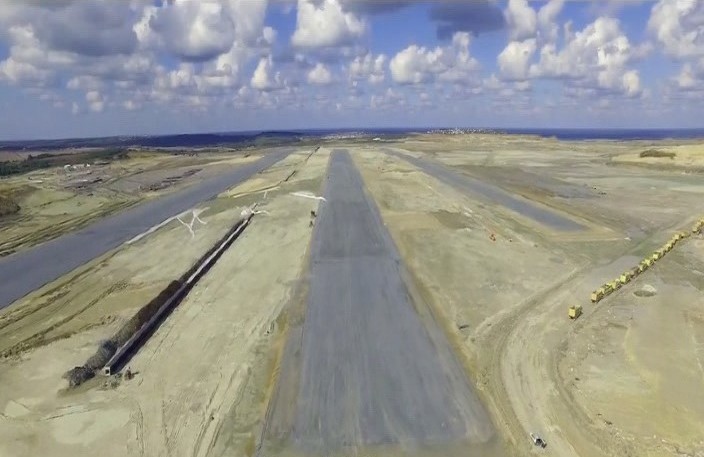 İstanbul Grand Airport (İGA), which was founded to carry out the construction work and operate the airport for 25 years, shared the latest aerial images of the number 1 runway through its social media accounts. Bulky planes like Airbus A380s and Boeing 747s can easily land and take off from the 3,750-meter-long and 60-meter-wide runway.

Being constructed on an area of 76.5 million square meters that is 35 kilometers from the city center, the airport consists of four stages with different designs. The first phase of the project's first stage will consist of two detached parallel runways which are 1,700 meters from each other, two attached runways and a main terminal building that is capable of harboring 90 million passengers.

Following the finalization of the construction work on the second phase of the first stage, the third detached parallel runway will come into service. When all phases are completed, the airport will be able to harbor 200 million passengers a year, as well as providing flights to more than 350 destinations and serving more than 150 airline companies. The airport will provide 100,000 new jobs on its own and 1.5 million through secondary sectors. The 1.4 million-square meter Cargo City within the airport's customs zone will include 300 cargo agency offices, on which the book-building process has already begun. There are three different price categories for 300 offices varying between 13 square meters and 19 square meters.
RELATED TOPICS