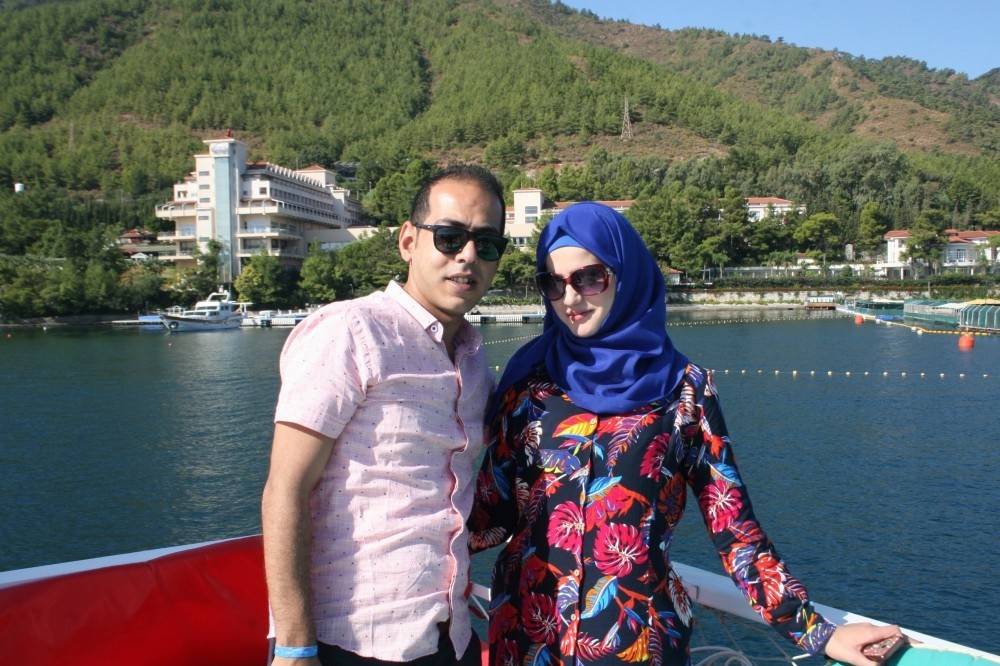 Tourists take pictures against the backdrop of the hotel where Erdou011fan stayed on July 15.
by Daily Sabah with IHA Oct 11, 2016 12:00 am
Turkish President Recep Tayyip Erdoğan has achieved an almost cult status in the Arab and Muslim world with his stand for the oppression of the Middle East. The admiration for the 62-year-old politician, who has been in power as prime minister and president since 2003, found a new niche in an unexpected place: a hotel on the southwestern tip of Turkey. Tourists from the Arab world drop by the hotel to see the place where Erdoğan stayed on the night of a coup attempt this summer.

Erdoğan spent half of his night on July 15 in the hotel while troops working for a Gülenist junta conducting the foiled putsch attempt were coming to assassinate him. The president escaped and flew to Istanbul while the Turkish public, police and soldiers who were not a part of the junta fended off pro-coup troops.

Since then, the Grand Yazıcı Turban Hotel, sitting on a leafy slope overlooking the Mediterranean Sea, has been a popular destination for those curious about the tense hours Erdoğan and his entourage spent in the hotel, whose walls were riddled with bullets.

A local tourism agency betting on the popularity of Erdoğan, probably the most famous Turk for Arabs apart from Tuğba Büyüküstün and Kıvanç Tatlıtuğ, stars of Turkish TV imports, enjoys positive feedback from its customers. After basking in the Mediterranean sun, tourists jump at the chance to see the place by the sea. Hopping on boats for daily excursions, tourists take selfies at the location while their Turkish guide informs them about what the president did that night. What happened in the small town of Marmaris, a tourist haven where the hotel is located, and how Turkey prevented coup troops from seizing power amid cheers of excited tourists, are the main topics of the talk. Tourism agency officials say although it is almost off-season for the tourism sector in Marmaris, business is not slack thanks to an increased interest in excursions to see the hotel. Bashar Kholoud Abugayas, a Jordanian, is among the tourists admiring the white facade of the hotel while expressing his fondness for Erdoğan. "He is a man who does everything for his country," he declares. Ala Nour Aladwani, a Palestinian tourist, heaps praise on Erdoğan. "He helped Turkey to advance. I like him very much. I am here in Marmaris only to see where he stayed that night," she says.

Tourism agency officials said they decided to add the hotel to their itinerary after requests from their customers, deciding to depict the coup attempt night to tourists during the excursion.
Last Update: Oct 11, 2016 12:22 pm
RELATED TOPICS